In 1999, researchers at the University of California, Berkeley, launched SETI@Home, a project that any curious person with an Internet connection could participate in. The scientists designed a program that people could download onto their home computers. When the machines were idle, the program would analyze radio telescope data for signs of extraterrestrial life. Since then, more than 4 million people have lent their computers to search for signs of aliens.

Taking a page from SETI@Home nearly two decades later, Josh Peek is testing a new method to pool home computing power to analyze Hubble Space Telescope images. Peek, a researcher at the Space Telescope Science Institute in Baltimore, Maryland, wants to use a network of computers to classify terabytes of images depicting dark expanses and sparse extraterrestrial structure. “As you look deeper and deeper, there are lots of diffuse structures in the sky that are very complex,” says Peek. He wants these computers to implement machine learning algorithms to identify the structures in the images. But his 2018 methods have a twist. To deploy his fleet of home computers, Peek has enlisted a new technology: the blockchain. 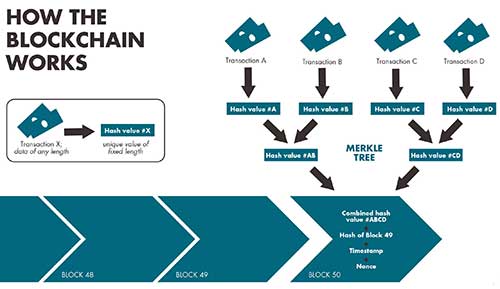 In a blockchain, fixed-length “hash” values are created from transaction data with a cryptographic algorithm. Each transaction's hash is combined in a “Merkle tree” to form a hash value for a block of transactions (A, B, C, D). When further combined with the previous block's hash and a timestamp, the growing chain is an open but secure ledger: Any retroactive change to a block would require changing all the subsequent blocks.

Blockchain technology, first invented in 2008 by a pseudonymous person known as Satoshi Nakamoto, is essentially a public spreadsheet for recording digital group activity. By design, no one can modify entries in the spreadsheet after they are written. It works like this: Each entry is linked to two numbers, one known as a hash that is calculated from that entry’s value, and the previous entry’s hash. This creates a self-referencing chain. If you try to tamper with an entry, all subsequent entries would point to a wrong hash.

In theory, this format creates a permanent, self-regulating record that does not require centralized control. The technology is best known for its role in cryptocurrencies, where it allows people to securely exchange money anonymously without banks. Many blockchain proponents say that it could distribute the power currently held by financial institutions and large corporations such as Amazon that monetize consumers’ personal information.

But Peek’s blockchain ambitions don’t involve world economic reform. “I don’t have any interest in changing how finance works,” he says. “It’s not something I know anything about.” He actually just wants to analyze his data—and blockchain may offer an efficient solution.

Although best known in finance, the blockchain doesn’t fundamentally involve money at all. The technology, it turns out, can help coordinate computing tasks across thousands or more computers. It’s a tool that allows multiple computers to work collectively in a decentralized way. The computers in Peek’s decentralized network collectively run machine learning algorithms to distinguish stars, galaxies, and other exotic blobs from each other. Each machine in the network takes a little chunk of the problem, analyzing a piece of an image at a time. And unlike SETI@Home, which used volunteers, Peek plans to use the blockchain to pay everyone who helps him process the images.

To execute this blockchain-facilitated pipeline, Peek collaborated with Bay Area-based blockchain startups Aikon and Revel (formerly called Hadron) earlier this year. The idea was born from a conversation Peek had with Aikon’s chief product officer, Marc Blinder, who is a childhood friend. “Josh is always looking for new ways to use new technology in astronomy,” says Blinder. The two found another collaborator in Cliff Szu, the CEO of Revel, which specializes in deploying machine learning algorithms on distributed networks.

They have yet to deploy their analysis pipeline at full capacity, but the plan is for it to essentially work like this: Revel, collaborating with Peek, has developed a machine learning model that classifies astronomical objects in Peek’s images. Users sign up with Revel in order to run a browser-based app trained with that model. The app classifies the images passively, without input from the user—and can run, albeit more slowly, even when you are using your computer for other tasks. (Szu demonstrated the app to me while simultaneously running our Google Hangout video chat in another tab.) Revel pays these users for their computing time with cryptocurrency.

Meanwhile, Aikon will act as a cryptocurrency converter between Peek and Revel. Peek, who doesn’t use cryptocurrency at all, will pay Aikon in regular U.S. dollars using funds from research grants. Aikon essentially changes that money into cryptocurrency that Revel accepts. Marc Blinder, the chief product officer at Aikon, compares this role to a credit card company when you swipe your card in a foreign country. “On the back end, Visa is doing all this work to deal with the fact you’re an American and you’ve just bought something in pounds,” he says. “But as a user, you don’t have to deal with any of that.” Aikon allows clients uninterested in cryptocurrency like Peek to seamlessly interact with cryptocurrency-based services like Hadron. Because of Aikon, Peek shouldn’t have to deal with cryptocurrency fluctuations at all.

Both Revel and Aikon are built on blockchain technology. As users’ computers sort Hubble images on Revel’s app, Revel uses a blockchain to keep track of their work and the cryptocurrency they earn. Aikon records its financial transactions on a blockchain. “Blockchain allows us to organize all those computers, divide up parallel computing tasks, and make sure everyone gets paid a fair amount for the portion of work they’re doing,” says Blinder. Anyone can download these blockchains. The point is to make all transactions publicly available so that nobody can own and sell your data, says Blinder. Instead, the two companies offer services as their business plan: Aikon sells streamlined interfaces for people to exchange crypto for regular currency, and Revel builds easy-to-use machine learning models that can be deployed with distributed computing.

From a scientific perspective, Peek is pursuing multiple research questions simultaneously. First of all, he is testing how well his machine learning model can identify astronomical objects. He’s also researching the blockchain itself as a data analysis technique. At the moment, he’s not convinced yet that it can perform better than conventional computing. The distributed computing network currently saves Peek money compared to using commercial cloud computing, but he’s not sure how effectively the technique will scale with more computers performing tougher computational tasks. “We’re definitely still in an exploratory phase,” he says.