Moving the Story Beyond Alice and Bob

Scientists are increasingly using comics as a way to move readers from bystanders to integrated participants in the dynamic action of physics. Too often, popularizers of science rely on clichés like Alice and Bob, the imaginary characters that physicists use to explain how quantum information is sent and received. But through conversations and stories, the three writers featured below move the stories in popular physics accounts beyond the familiar examples—beyond Alice and Bob arguing over entanglement.

Physicist Clifford Johnson welcomes readers into the unsure, back and forth conversations between physicists. Philosopher Jeffrey Bub gives readers more say in how they experience theoretical physics by placing them into familiar thought experiments. And APS Head of Outreach Rebecca Thompson concentrates on creating a compelling story to draw middle schoolers into the conversations of characters who use physics to solve problems.

Clifford Johnson was looking for something beyond the Standard Model.

The Standard Model of Physics Outreach Books, that is. Johnson, Professor of Physics and Astronomy at the University of Southern California, has been active in outreach at the national level since he began BBC radio broadcasts in the late 1990s. In Johnson’s view, there is a format for physics outreach books written by physicists for popular audiences.

Often, it’s an 11-chapter book, Johnson said. “Chapter one introduces classical physics, chapter two is a bit of quantum mechanics, chapter three a little bit of relativity. By chapter 10, everything is introduced, and then chapter 11 is what the author really wanted to talk about, what’s going on now in the field,” Johnson said.

This does not mean that Johnson sees the Standard Model of Physics Explainer Books as a bad thing. After all, in physics, the Standard Model has lasted as long as it has for a reason: it works. The 11-chapter model is an effective and quick way to explain some ideas in physics, and many prose books do it “beautifully,” according to Johnson.

“If it’s a real conversation, people are going to say stuff that you don’t understand,” Johnson said. “Eventually, [it] will make sense in context. In the book, the reader can get a sense of many of the ideas that are discussed in that conversation, without me having to join all the dots, pull [you] by the hand and take you through the whole thing.”

Johnson’s book, a physics comic book entitled The Dialogues: Conversations about the Nature of the Universe, was published in October 2017. And Johnson’s book is not alone; the world of comics written about physics by physicists is growing. Bub and Thompson do write comics that explicitly want to explain science, but they agree with Johnson: the medium and message cannot be separated. Science comics do not work if you think of them as “putting my lecture into mouths of a few different characters,” Johnson said. 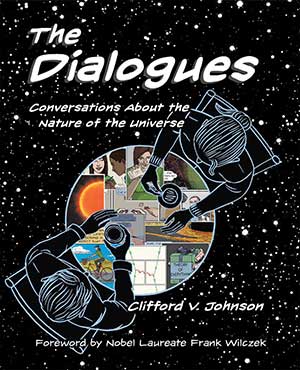 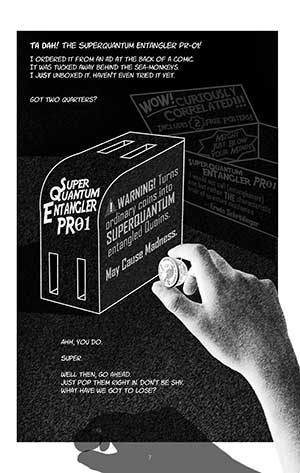 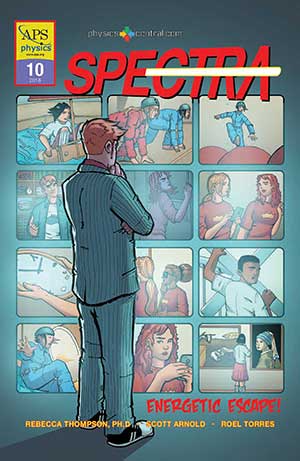 As Johnson set out dedicating himself to learning to draw (a process that took over six years in his spare time as he realized he wanted to illustrate his comic himself), he realized the multi-faceted potential of illustrations for a popular physics book; not only could he illustrate the geometric nature of physics concepts, he could also reflect a diversity of people having these conversations.

In contemporary physics books—popular or textbook—Johnson sees that any conversation is normally limited to “a few pages of a dialogue between Alice and Bob if they’re worrying about a quantum state.”

Jeffery Bub was excited to delve into that conversation between Alice and Bob.

A professor of philosophy with a Ph.D. in physics, Bub carries out research at the University of Maryland that probes the foundations of physics. In 2016, he published a book intended for a popular science audience, Bananaworld. The book was written so that his son, a physiologist, would find it enjoyable and interesting. But after publication, his son reported that he got lost in the math.

So Bub decided to try a comic that everyone could read.

Totally Random: Why Nobody Understands Quantum Mechanics, published in June 2018, literally puts thought experiments that prove quantum correlations into the hands of the reader. The narrative of the comic takes the reader through the process of discovering two entangled “coins” by drawing the reader’s hands on the page. This allows readers to feel like they are running the test themselves instead of going through intermediaries like Alice and Bob.

Bub’s goal was to use the medium of comics to provide a technical, visual experience of understanding scientific ideas. “We wanted to have a comic where you actually do the thought experiments,” Bub said.

Tanya, Bub’s daughter, is a programmer with a fine arts and philosophy of science background. She illustrated a few sketches for Bananaworld and all of Totally Random. At first, the comic was a continuation Bananaworld’s Alice-in-wonderland and Bob-the-Cheshire-cat theme. But then, “Tanya called me up and said she was sick of the bananas,” Jeffery Bub said.

In the next iteration of the comic, Alice and Bob became more realistic characters living in Oxford. Bob—now a post-doc—loses his funding in the first panel. He walks home and runs into a man selling a magic coin trick in the street. Bob buys it and discovers these are magically entangled coins that behave just like entangled particles.

After a while, though, “we couldn’t get our characters to do all the things we wanted, like things that electrons and photons do. I would call up Tanya and say why don’t they do blah blah blah, and she’d say Alice wouldn’t do that, or Bob wouldn’t do that,” Bub said.

So they got rid of Alice and Bob, and put the reader in charge of the coins. “The main character is really the reader,” Tanya Bub said.

For APS’s Head of Public Outreach, Rebecca Thompson, it’s all about plot.

“One of the most important things about Spectra is making sure that it’s plot-driven,” Thompson said. She always wants to make sure that the story in her science comic works instead of just focusing on teaching physics.

“A lot of the time, educational comics suffer from a lack of plot. People want stories, they’ll read stories; that’s what engages people,” Thompson said. “But a lot of [writers make] the educational piece the forefront of the comic…that’s when you draw up people in superhero outfits, and they say ‘I’m going to tell you about what I do in science.’”

Eleven years ago, Thompson wrote the first annual issue of Spectra, for middle school students. The newest issue, Spectra’s Energetic Escape, is about the latest adventures of Spectra, the laser-superhero alter ego of a middle-school student. A competition based on topics in engineering and physics, modeled after escape rooms (with the prize of tickets to see the newest boy-band, The Free Radicals) goes awry and imperils Spectra and her friends. They are only able to save the day by exploiting conservation of energy, among other physics concepts, and using Spectra’s laser superpowers.

The author is a freelance writer based in Minneapolis.