On August 12, 2018 NASA’s Parker Solar Probe blasted off on its seven-year journey to observe the Sun. The spacecraft is named after 2018 APS Medal recipient and APS Fellow Eugene Parker.

Parker’s name is familiar to APS members and plasma physicists alike. In addition to receiving this year’s APS Medal for Exceptional Research, he received the 2003 APS James Clerk Maxwell Prize for Plasma Physics and the 1989 National Medal of Science. His lifelong work in solar physics, especially his theoretical hypothesis for the superheating of the solar corona, led to his recognition by NASA.

When asked about his reaction to getting a phone call about the honor, the first time a NASA mission has been named after a living person, Parker expressed surprise at the decision. “The call ended, and I sat there staring at the wall, beginning to feel what had transpired,” he said. 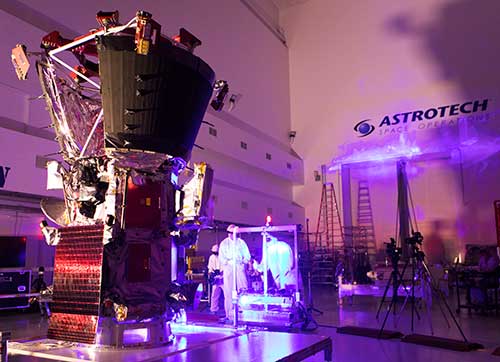 The Parker Solar Probe undergoing testing prior to launch

After a moment, the news began to sink in. “I felt immensely flattered, particularly so after two decades of retirement,” Parker said. “The Solar Probe was going to be a big step forward in probing the conditions close to the Sun, and I looked forward to the fun.”

In a paper published in 1958, Parker coined the term “solar wind” to refer to the continuous outward flow of charged particles from the Sun’s upper atmosphere (the corona). However, his ideas about the solar wind were initially rejected. Within a few years of that paper’s publication, observation from several Luna missions, Venera 1, and finally Mariner 2 in 1961 confirmed the presence of the solar wind.

In addition to his work developing the theory behind the solar wind, Parker also sought to explain what causes a dramatic temperature discrepancy that has stumped solar physicists for decades: Why is the Sun’s corona so much hotter than its surface?

The photosphere, the visible surface of the Sun, is a balmy 6,000 K, but the corona is significantly hotter, measuring between 1,000,000 to 2,000,000 K. It’s a conundrum introduced early in a physics student’s career, a fundamental property of the Sun. But what is the cause?

In general, competing theories on the topic tend to fall into three main categories: magnetohydrodynamic oscillations called Alfven waves that can accelerate charged particles; “nanoflares,” relatively tiny cousins of solar flares; and the process of magnetic reconnection, where the field lines get tangled and twisted around each other until they snap back to straighter lines. The probe will test the first two of these theories, the second of which was proposed by Parker 30 years after his paper on solar wind was published.

To gain insights into what combination of these mechanisms is powering the solar wind, the spacecraft carries four instrument packages: FIELDS, to capture the intensity and scale of the Sun’s electric and magnetic fields; WISPR, a wide-field camera to image material ejected from the Sun; SWEAP, which will collect electrons, protons, and alpha particles; and IS☉IS to characterize particle energies.

The Parker Solar Probe will be the closest flyby of the Sun of any mission thus far, passing within 6.2 million km of the Sun’s surface on its final three orbits. This is a factor of seven closer than the previous record set by Helios 2 which passed within 43 million km in 1976. As it passes through various solar regions, the probe will be able to collect data and hopefully observe the mechanisms causing the superheating of the Sun’s corona.

“Ten years from now we will better understand the activity of the Sun and the associated terrestrial consequences,” Parker mused.

In the meantime, the Parker Solar Probe, like its namesake, will continue to study the Sun. The probe will continue a looping orbital path including seven encounters with Venus. In seven years, it will begin its three closest approaches to the sun. Observational data potentially will solve the coronal conundrum and help settle the decades-old debate. And perhaps, as with all science, bring to light new questions about the nature of the Sun.