At the turn of the last century, physicists discovered the process of nuclear transmutation, whereby one chemical element can be converted into another, via nuclear decay. Ernest Rutherford and Frederick Soddy found that the radioactive thorium they kept in the lab spontaneously decayed into radium. Soddy proclaimed they had discovered transmutation. “For Christ’s sake, Soddy don’t call it transmutation,” Rutherford purportedly snapped in reply. “They’ll have our heads off as alchemists.”

By 1919, Rutherford successfully converted nitrogen into oxygen with this process. And in 1957, physicists figured out that heavier elements were created in the final throes of supernovae. When the age of particle accelerators dawned, physicists realized they could be used to create even heavier elements.

Lawrence Berkeley National Laboratory (LBNL) helped pioneer the field of superheavy elements, creating berkelium, californium, lawrencium, and seaborgium in its cyclotron. By the early 1980s, the Gesellschaft für Schwerionenforschung (GSI) Laboratory in Darmstadt, Germany, was dominating the discoveries, creating bohrium, hassium, and meitnerium, along with the as-yet-unnamed elements 110, 111, and 112. Not to be outdone, Russian scientists at the Joint Institute for Nuclear Research (JINR) in Dubna, headed by Yuri Oganessian, created element 114 in 1998. So LBNL scientists were keen to re-establish their leadership role, and were confident they could find the elusive element 118 with a new gas separator detection device. 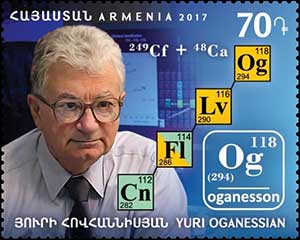 Yuri Oganessian, leader of the team at JINR that made the definitive discovery of element 118, now called "oganesson."

In April 1999, LBNL scientists spent five days bombarding a lead target with a beam of krypton nuclei. The debris passed through the separator where detectors could record the energy, position, and timing of each event. All the raw data was processed by LBNL team member Victor Ninov who was originally trained at GSI. He looked for evidence of a decay pattern consistent with krypton and lead fusing briefly to produce a nucleus of element 118. Ninov found not one, but three such events. Two weeks later, after a second run, he found yet another event. The team published their results in Physical Review Letters.

The next step was to confirm the discovery by reproducing it in other cyclotrons. GSI scientists tried and failed to do so that summer; scientists at the Riken Institute in Japan were also unable to reproduce the result. When LBNL scientists tried to replicate their own experiment in 2000, they couldn’t do it either. An independent review committee was able to rule out the most likely sources of experimental error, and the team spent much of the year upgrading their detectors.

In 2001, they made another run, and once again Ninov claimed to have found evidence of the 118 decay chain, but nobody else on the team could find it in the data. Nor could a second review committee find the pattern in the original raw data from 1999. At that point, LBNL submitted a retraction to Physical Review Letters. When the researchers reviewed the analysis software log files for the 2001 data run, initially it seemed to show the decay chain. But a second analysis of events logged just a few hours later in the run showed no such pattern. The earlier record had been changed. Someone had cut and pasted lines from elsewhere in the data and changed a few numbers. The 1999 records also showed similar tampering for one of the three reported events.

LBNL determined that Ninov was the most likely culprit, since he had responsibility for translating the raw data into readable results. And his computer account was used to access the files. Ninov vehemently denied any wrongdoing, but he was fired from the lab. His former colleagues expressed bafflement as to his motives. The review committee also censured the rest of the group for its lack of vigilance.

Nuclear physicists at JINR in Dubna led by Oganessian, along with colleagues from Lawrence Livermore National Laboratory (LLNL) continued the hunt for element 118. After additional experiments in 2002 and 2005, they found three more signature decay patterns. This time no one person was responsible for the data analysis, and the findings passed rigorous scrutiny. Finally, on October 9, 2006, JINR and LLNL officially announced they had definitely discovered the elusive element.

Initially given the placeholder name ununoctium, in November 2016 the International Union of Pure and Applied Chemistry officially named it “oganesson,” after Oganessian. “For me it was an honor,” Oganessian later commented, in no small part because the suggestion had come from his colleagues at LLNL.