When Jesse Shanahan enters a conference venue, she doesn’t just scroll through the scientific program for interesting talks and events. Her eye is focused on something bigger: the accessibility of the meeting for the entire scientific community. So where one might stroll into a hotel ballroom and sit down, Shanahan’s gaze is fixed on gaps. Is there space for people who use wheelchairs? Are there enough benches throughout the venue for people to sit down? Are there quiet rooms for those who need a sensory break? Is the font on the nametags large enough to read without a scanning electron microscope? Do the nametags incorporate the person’s preferred gender pronouns, as is starting to become the norm?

These are the questions that inspire Shanahan’s work as an astrophysicist and accessibility consultant. Although early in her career and only 27 years old, she has already made a mark at the American Astronomical Society (AAS), where she co-founded the Working Group on Accessibility and Disability and currently serves on its Coordinating Committee. She currently does freelance accessibility and inclusion projects for AAS and schools and universities. For example, an instructor might want to know how to arrange a classroom and devise a curriculum to be more accessible and inclusive.

Shanahan’s overarching goal is to remove barriers and "small reminders that ‘this field isn’t for you’," she says. And this mission is highly personal — as a graduate student in astronomy and physics, she faced hardship when she developed a disease that caused chronic pain and required her to use aids to walk. Suddenly, she couldn’t access the observatory because she couldn’t climb the stairs. 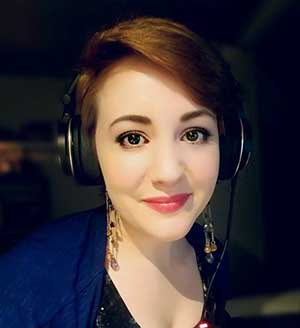 This was just one of several barriers she faced as she got used to living with her condition, and she noticed the lack of assistance, support, and resources for disabled scientists within the scientific enterprise. It lit a fire in her. "I am just really stubborn. If there is some kind of challenge, it makes me want it even more," she says. "I shouldn’t have had to face those challenges. If I really want something I don’t care if something gets in the way, especially if I see those barriers should not exist in the first place."

Although she is passionate about ensuring access to science for all, she didn’t start her career as an astrophysicist. In fact, she didn’t emerge into science until well into her undergraduate years at the University of Virginia, where she at first wavered between majoring in physics, or linguistics and anthropology. She ultimately chose linguistics because the class sizes were smaller, something she was used to from her high school. But she didn’t drop her love for physics and mathematics, and throughout her college years, served as a math tutor and explored the subjects on her own time.

Shanahan studied linguistics in Tunisia during the Arab Spring in 2011, but turned to physics. "I had always been dancing around physics and math, and I said why don’t I see if this is something I like. So I picked up an astrobiology class and I was hooked." She was convinced that she had found her field.

While finishing her linguistics work, she popped her head into physics professors’ offices during a conference at Rice University. "I can’t believe people talked to me," she says. "I was this random linguistics student asking them about what can I do to make this switch." And while several people gave her a doomsday career scenario, David Alexander, a solar astrophysicist, spent an hour speaking with her. He put her in touch with people at George Mason University (GMU) near where she was based in Virginia, and soon after, Shanahan started doing volunteer research in GMU’s department of astronomy. "I did the opposite of the conventional astronomy student," she notes with a chuckle. "I started out in research."

With the support of her faculty mentors at GMU, she was able to apply for and get accepted to a graduate astrophysics program at Wesleyan, which "was like a bridge program and designed for students like me who might not be competitive in other programs."

But it was while she was at Wesleyan that Shanahan found an especially important calling. She received a diagnosis of a genetic connective tissue disease. The disease and the treatments impacted her ability to move and suddenly she found herself facing barriers that she hadn’t even realized existed. "I couldn’t access the observatory without pain and trouble. With stairs, there was always a risk of a fall," she says. "At Wesleyan, there were varying layers of support and this was a whole level of obstacles I never realized. I didn’t know my rights. I didn’t know the barriers that people with disability face."

"My doctor told me the consistent high pressure, stress and lack of sleep was irreparably damaging my health. Eventually the demands of the program became so great I felt I had to choose between my health and career, and I chose my health," she explains. "Not every department is like this. But sometimes the nature of academia is that people who have these illnesses and disability often face these choices. I didn’t know about this. I was not used to such severe consequences to my health. It started with survival and I didn’t have a choice — it’s either this or I give up and can’t do my research."

Shanahan remained at Wesleyan for 2 years, but when she left she wasn’t ready to give up astrophysics. But she sensed there were definitely others in the same situation and perhaps had it even worse. As a scholar and an observer, she was keen to uncover solutions. "I did use this [revelation] to motivate me. People with disabilities don’t have a choice — I had to advocate for myself. The more I learned that this is endemic and widespread and systematic it lit my fire about how little work was being done here. I realized … then I wanted to keep fighting for it."

And fight she did. In 2015, she was serving on a panel on Inclusive Astronomy, an AAS-sponsored conference about how to tackle these issues. Meg Urry, professor of astronomy and physics at Yale, who was President of AAS at the time, reached out to Shanahan about organizing accessibility for an AAS conference.

While this experience pushed her towards accessibility consulting as a profession, she didn’t give up on her dream of a being in astrophysics. Through networking, she found her way to Chris Lintott, a professor of astrophysics at the University of Oxford, who engaged Shanahan in a project called the Galaxy Zoo, which invited the public to help identify galaxies. "He was the one who said I don’t have to make a choice between my health and career," she says. "I learned from him things can be different. Academia doesn’t have to be this cutthroat environment. You don’t have to let it affect or injure your health. It made me realize there is a way back in."

Since the beginning of 2017, Shanahan has been conducting research and pursuing data science projects for the Galaxy Zoo, and she also does freelance science writing, tutoring, outreach, and disability consulting work.

Shanahan is still early in her career and still thinking about what to do next. But she is certain that she wants to remain in science and expand her impact on both science and scientists. "Maybe it’s not a Nobel Prize — maybe it’s just getting the font changed on a nametag. … But that’s far more meaningful to me than any research paper or publication," she says. "If I can make a change that is lasting and helps people then I consider myself successful."

Alaina Levine is Contributing Correspondent for APS News. Full Disclosure: The author is a paid speaker for the AAS.