APS Joins the March for Science

In 2017, one million science supporters joined together in the March for Science, an unprecedented movement to stand up for science in public policy. This year, on April 14, science marched on at over 200 satellite locations.

Like last year, this year’s main March for Science took place in Washington D.C., drawing crowds of scientists and science enthusiasts, armed with eye-catching signs and a passion for science advocacy. More than 250 science organizations, including APS, joined the March for Science, helping to make the event possible.

APS and the Optical Society (OSA) partnered for an open house at the OSA headquarters in downtown D.C. the morning of the March to present a physics-demo pre-show that drew in a small but enthusiastic crowd. APS and OSA also joined forces for the March for Science teach-in program on the National Mall, hosting physics demos and an always popular talk on The Physics of Superheroes by Jim Kakalios.

"It’s great to get out and meet local people who are excited about science," said Stephen Skolnick, a member of the APS outreach team. "It’s great that they’re seeing the need for scientific thinking in our daily lives."

The teach-in tent also pulled in people who hadn’t planned on joining the March for Science: Attendees of concurrent events happening near the National Mall were intrigued by science demos. "We ended up doing outreach where it wasn’t totally expected," said Skolnick. "We got to see wonder on kids’ faces — that’s what we’re hoping to do." 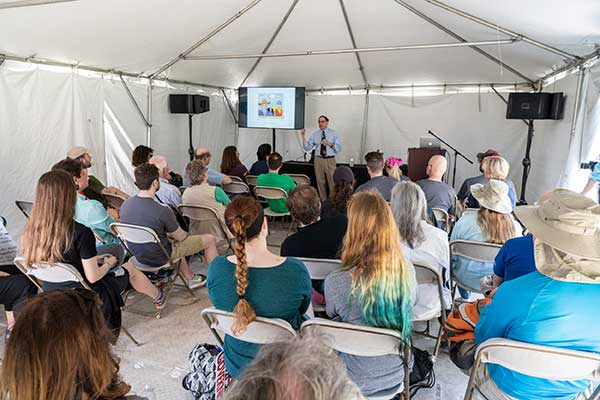 James Kakalios entertains the March for Science crowd with a talk on the physics of superheroes.

In addition to the pre-march teach-in, the March for Science hosted a rally before the march began that included a variety of speakers, from Rush Holt, CEO of the American Association for the Advancement of Science, to 8-year-old Flint resident Mari Copeny, who talked about the contaminated water in her city.

This year’s March drew a smaller turnout than last year, likely due to the high number of marches and events in the past year, but the fact that the March happened still had an effect. "A diminished number of people isn’t a sign they don’t care about science," said James Roche, APS outreach programs manager. "We just have to keep knocking on the door."

To continue voicing support for science, the week after the March for Science was a dedicated week of action to encourage March attendees to contact their representatives. "Even just leaving a message for a [member of Congress] can have a concrete effect," said Skolnick.