One of the best elements for atomic clocks is cesium, which was first discovered in 1860 by Robert Bunsen and Gustav Kirchhoff. However, it took another 20 years before another scientist successfully isolated the metal.

Born in Germany in 1811, Bunsen’s father was a professor of modern languages at the University of Göttingen. Bunsen himself eventually earned his doctorate there. He spent the next three years traveling across Europe before becoming a lecturer at his alma mater. He held subsequent positions at the University of Marburg, Breslau (in Poland), and Heidelberg. Initially interested in organic chemistry, he lost an eye while working with an arsenic compound known as cacodyl cyanide, which exploded during an experiment. But his work did produce the most effective antidote for arsenic poisoning, iron oxide hydrate, which is still used today.

Bunsen is best known for his invention of the Bunsen burner in 1855 with his laboratory assistant Peter Desaga, a device which has been a staple in chemistry labs ever since. It proved instrumental to his studies of emission spectra from heated elements and arguably marked the beginning of spectroscopy as an invaluable tool in scientific research.

Kirchoff was born in 1824 in Königsberg, Prussia (now Kalingrad) and moved to Berlin shortly after his marriage to the daughter of his mathematics professor. At just 26, he became a professor at the University of Breslau, where he first met Bunsen. Kirchhoff initially researched electrical circuits and thermal radiation; he coined the term "black body radiation" in 1862. (Kirchhoff’s laws of electrical circuits and Kirchhoff’s law of thermodynamics are both named in his honor.)

Bunsen convinced Kirchhoff to move to Heidelberg with him in 1854 so they could continue to collaborate on research proving that all pure elements emit a distinct spectrum. Scientists had previously observed what we now know as emission spectra in the 1750s, when Thomas Melvill noticed (while observing them with a prism) that the flames from lamps burning alcohol infused with dissolved salts emitted more yellow light than the rest of the light spectrum. Several years later, Andreas Sigismund Marggraf claimed he could tell the difference between sodium and potassium compounds via a similar method. Sodium produced more yellow flame, while potassium emitted violet flames. 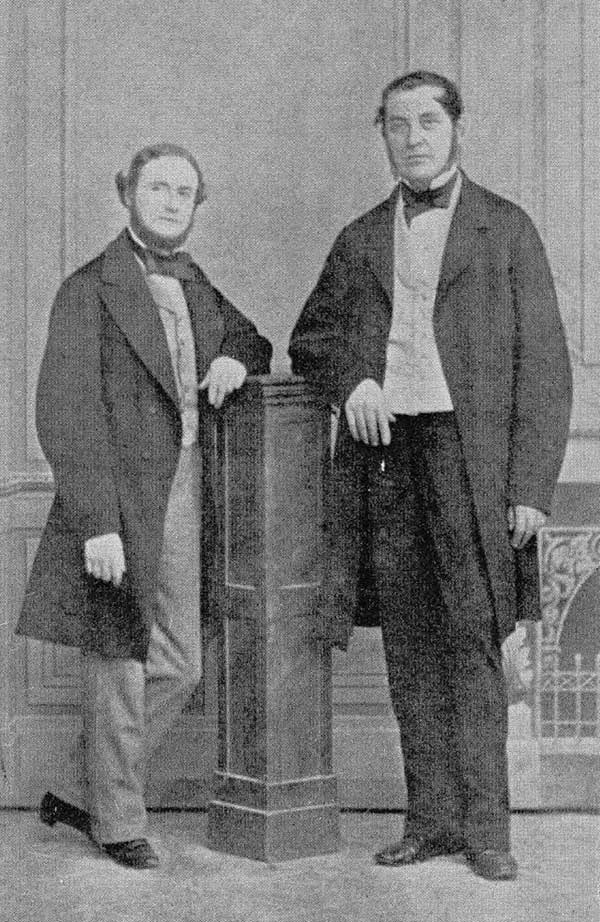 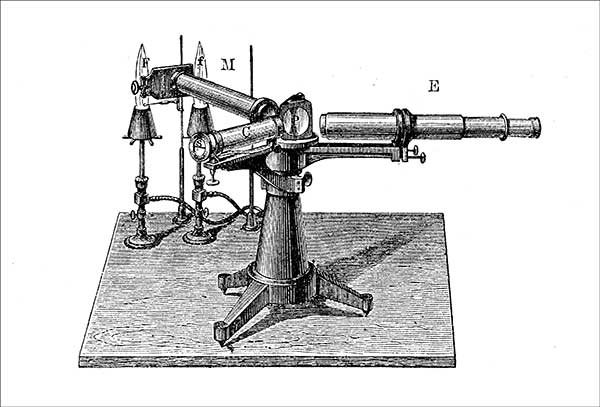 Spectroscope used to detect spectral lines of elements in a flame

In 1822 John Herschel noticed emission spectra lines while passing light from different colors of flame through a prism, and four years later, photographer William Fox Talbot noted, "A glance at the prismatic spectrum of a flame may show it to contain substances which it would otherwise require a laborious chemical analysis to detect." Talbot later used it to distinguish between lithium and strontium compounds, both of which emit red flames, but with different spectra. But impurities in the samples available at the time made it difficult to prove, since multiple spectra would be produced simultaneously.

So there had never been a careful, systemic approach to such studies before Bunsen and Kirchhoff teamed up in 1859. Bunsen came up with the idea of using filters to block intense colors (like the yellow of sodium compounds), to better detect less intense colors of light emitted by other elements, such as the violet hues of potassium. Kirchhoff then suggested improving on this method by adapting the Herschel/Talbot method of passing the light through a prism. Together they devised an instrument based on this principle: the spectroscope.

On May 10, 1860, while analyzing the spectral emissions from spring waters known to be rich in lithium compounds, Bunsen spotted a new sky-blue signature in the spectra in addition to the expected light from sodium, lithium, and potassium. He and Kirchhoff realized it belonged to a new element, which he dubbed cesium (Latin for "sky blue"). It was just a trace amount, so he hired a chemical factory to isolate the cesium by evaporating 12,000 gallons of spring water. This gave him a large enough sample to determine its properties: an atomic mass of 128.4 (today we know it is 132.9). But despite his skill with the method, he failed to isolate pure metallic cesium with electrolysis. The result was always a kind of blue "melt." This substance "neither under the naked eye nor under the microscope" showed any trace of metallic substance, so they decided it must be a chloride. (It was more likely a colloidal mix of the metal and cesium chloride.)

The following year, Bunsen and Kirchhoff observed the presence of yet another alkali metal with a dark red spectrum — hence its name, rubidium (from the Latin for "dark red"). And this time Bunsen did successfully isolate the element, making his inability to isolate cesium all the more frustrating. It was Swedish chemist Carl Theodor Setterberg who finally did so, using a mixture of cesium-based salts derived from waste material after extracting lithium from lepidolite ore. Still, Bunsen and Kirchhoff were the first recipients of the Davy Medal "for their researches and discoveries in spectrum analysis."

Bunsen retired from the university at 78 and spent his remaining years studying geology and mineralogy, dying ten years later in Heidelberg. As for Kirchhoff, he still collaborated with Bunsen, but he was far more interested in using emission spectra to study the night sky, identifying some 30 elements present in the Sun. He and Bunsen also explained certain dark lines in the solar spectrum (now known as Fraunhofer lines). Given his disability — he often used crutches or was confined to a wheelchair — over the years he found it increasingly difficult to conduct experiments, so he found himself gravitating toward more theoretical work, eventually accepting the chair of mathematics at the University of Berlin in 1875. Kirchhoff died in 1887 and is buried in Schoenberg, Berlin, just a few miles from the graves of the Brothers Grimm.