Spinning a tale of graphene and spiders

Spider silk is known for its high tensile strength and toughness, but researchers have now found they can improve on nature by feeding graphene and carbon nanotubes to these tiny weavers. Lepore et al. report in 2D Materials (DOI: 10.1088/2053-1583/aa7cd3) that after spraying water containing graphene flakes or carbon nanotubes into a corner of a box of spiders, and waiting until the animals had ingested the mixture, the resulting silk was markedly stronger and tougher. The team tested the carbon diet on 21 spiders of three different species (alas, 6 died before their silk could be obtained). Using a nanotensile tester, the researchers measured the silk that was successfully obtained, and they used Raman spectroscopy to characterize the molecular structure of the unmodified and modified silk samples. On average, the team notes, the strength and toughness of the silk from nanotube-fed spiders surpassed natural silk and approached that of the strongest artificial carbon fibers and natural materials (limpet teeth). These new results show that a possible way toward improved silk fibers for a variety of applications may indeed lie through the spiders’ stomachs. 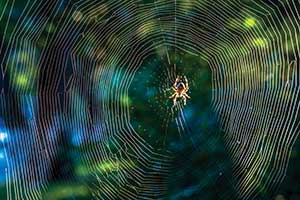 Observations of gold ion collisions reveal that the post-crash nuclear matter rotates faster than any other recorded fluid. This strong swirling occurs in a hot mixture of quarks and gluons, called the quark-gluon plasma. Created in heavy ion collisions, this plasma was presumably the dominant form of matter during the first microseconds after the big bang. Recent observations showed that the quark-gluon plasma has an extremely low viscosity, which led to predictions that this fluid could rotate very quickly. The STAR collaboration looked for evidence of this swirling motion in off-center collisions at the Relativistic Heavy Ion Collider. As reported in Nature (DOI: 10.1038/nature23004) they found that the Λ hyperon particles produced in the collisions had spins that, on average, lined up with the inferred angular momentum of the system. This spin polarization implied that the quark-gluon plasma at the collision center rotates about 1022 times per second, which is a quadrillion times faster than any other known fluid. The results could help refine theories on quark-gluon plasma evolution. 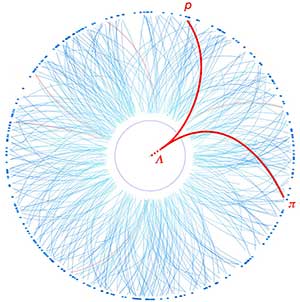 Much of surface chemistry depends on the local properties that atoms and molecules encounter on a substrate, and researchers have now found a way to look at the orientation of interfacial water thanks to second-harmonic generation (SHG) microscopy. In SHG, a laser beam (say, red) entering a material produces another beam at twice the frequency (say, green). However, this only occurs in materials whose structure breaks symmetry, such as certain crystals and interfaces. In Science (DOI: 10.1126/science.aal4346), Macias-Romero et al. report that they can take advantage of the surface selectivity of SHG to image the structure and dynamics of water molecules on a glass capillary. With their setup, the researchers mapped in 3D the orientation of water molecules at the glass surface for different pH values of water. Each molecule’s orientation depends on the local surface charge, so these maps revealed the extent of deprotonation as SiOH was converted to SiO-. This capability should benefit researchers in many fields where interfacial inhomogeneities influence the surface chemistry. 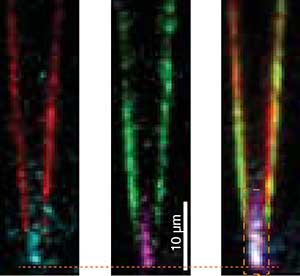 High-precision experiments at CERN have provided unambiguous evidence for a new baryon containing two charm quarks. In principle, baryons can be composed of any combination of three quarks. However, common baryons like protons and neutrons only contain light quarks, and all known baryons contain at most one of the three heavy quark types (charm, top, and bottom). As reported in Physical Review Letters (DOI: 10.1103/PhysRevLett.119.112001), CERN’s Large Hadron Collider beauty (LHCb) Collaboration has now discovered a baryon known as the Ξ++cc, which is made of one light (up) quark and two heavy (charm) quarks. Previous experiments had hinted at the existence of a related doubly charmed particle called the Ξ+cc, but LHCb has now sifted through data from LHC’s latest run to provide better-than-5-σ evidence for the Ξ++cc. The collaboration also determined with high precision its mass: 3621 MeV∕c2—a value in good agreement with theoretical expectations. While the existence of this particle was expected, the Ξ++cc will provide researchers with a unique system for testing quantum chromodynamics, the theory for the strong interaction that binds subatomic particles together. (For more, see the Viewpoint by Raúl Briceño in Physics “A Doubly Charming Particle.”) 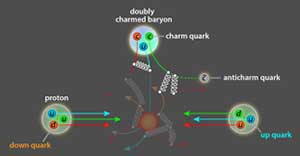