Infrared photography is an invaluable workhorse tool across many different scientific fields and practical applications, as well as a popular hobby among professional and amateur photographers. And we owe its existence — as well as that of ultraviolet photography — to an enterprising American physicist and inventor named Robert Williams Wood, best known in scientific circles for his research on optics and spectroscopy.

Infrared radiation was discovered in 1800 by Sir Frederick William Herschel, best known for building telescopes and discovering the planet Uranus. Herschel painted the bulbs of three thermometers black, and then arranged them with one tip in the solar spectrum made by a prism, and the other two outside the spectrum to serve as controls. His first finding was that as he moved the thermometer across the spectrum from violet to red, the thermometer temperature steadily increased. His second was that moving the blackened thermometer just beyond the red end of the spectrum produced the highest temperature of all. This experiment was the first observation of light beyond the visible spectrum.

Photography came into its own in the 19th century, but it was not possible to make pictures of anything in the infrared, because the chemicals used for early photography were not sensitive to longer wavelengths of light. Wood resolved that issue and thereby launched an industry.

Born in Concord, Massachusetts in 1868, Wood initially planned to become a priest. But one night he observed an aurora and became fascinated by what might cause such a phenomenon. He thought the culprit might be “invisible rays,” leading him to study optics instead. After earning degrees from Harvard, MIT, and the University of Chicago, he joined the faculty of Johns Hopkins University in 1901, where he remained until his death in 1955.

Wood made waves early in his career with his infamous debunking of French physicist René Blondlot’s claim to have discovered a new type of radiation called “N-rays.” Unable to replicate Blondlot’s results, Wood traveled to France in 1904 to observe the experiment firsthand. He removed a crucial prism from the apparatus between runs when the Frenchman wasn’t looking, and when Blondlot still claimed to observe N-rays on the second run, Wood concluded he was deluding himself, and wrote a letter to Nature debunking the claim.

The year before, in 1903, Wood invented an ultraviolet filter for photography, which he made from nitroso-dimethyl-aniline, combined with a small amount of a dye called uranine. This made the filter block visible light but transmit ultraviolet, and he used it to take the first photographs of ultraviolet fluorescence. The filter became known as “Wood’s glass,” and was the technology behind blacklight lamps. It also transmitted some infrared light, although very long exposures were required.

Several of his photos appeared in the October 1910 issue of the Royal Photographic Society Journal, as illustrations for Wood’s papers on the optical effects involved — including the so-called “Wood effect,” which is the dreamlike appearance of photographs in the infrared. Infrared photographs feature a milky appearance to skin in portraits, and also dark skies — the Rayleigh scattering that makes the sky blue doesn’t scatter much infrared. Also, the infrared wavelengths penetrate a few millimeters beneath the dermis, and then reflect back out of the skin, so they can image blood vessels within this thin layer.

Wood didn’t show much interest in profiting from his filters, even though during World War I, infrared-sensitive photographic plates were used for spectroscopic analysis. It wasn’t until the 1930s that infrared film hit the commercial sector, when Kodak introduced the first emulsions designed for infrared photography. By the 1960s, the company offered 35mm false-color infrared film, and the popularity of infrared photography boomed — driven in part by its use in pop music album covers by rock stars such as Jimi Hendrix and Frank Zappa. The advent of digital cameras made physical films obsolete, and Kodak responded to the sharp decline in demand by discontinuing its 35mm infrared film products in 2007.

While Wood’s specialty was optics, he also made important contributions to the field of ultrasound. It started with a demonstration for his students to elucidate the wave nature of light by photographing the sound waves given off by an electric spark (a method invented by August Toepler). During World War I, Woods shifted to ultrasonics, and he worked in Paul Langevin’s lab developing ultrasound for detecting submarines. By 1926, he wound up working with Alfred Lee Loomis to develop high-power ultrasonic sources. Their experiments revealed that ultrasound could melt the interior of an ice cube before the exterior, tear apart living cells, and kill frogs, mice, and small fish with just one or two minutes of exposure.

Over his long and varied career, Wood also assisted in the investigation of the infamous Wall Street bombing of 1920, among other cases, and is often credited with the invention of tear gas. He spun the surface of mercury into a parabolic mirror and with it built a working reflecting telescope. In addition to scientific treatises, he co-authored two science fiction novels (The Man Who Rocked the Earth and The Moon Maker), as well as two children’s books of nonsense verse. He died in 1955 in Amityville, New York.

Today, infrared photography is used in the study of plant diseases, revealing changes in pigment or cellular material; in paleobotany; to enhance details of deeply pigmented tissues in photomicrography in the biological sciences; and by the textile industry to detect irregularities in fibers. It is also used in criminal investigations to examine and identify cloth, fibers and hair, and it's become a standard laboratory tool for imaging faded, damaged or altered documents. One hopes Wood would be gratified to see how ubiquitous his technique has become. 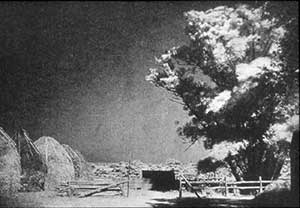 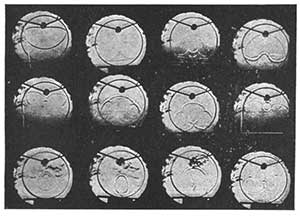