The Tokai to Kamioka (T2K) collaboration shoots a beam of neutrinos across Japan to measure the ways neutrinos can change from one type to another during the journey. On Friday, August 4 2017, Chang Kee Jung, former International Co-spokesperson for the T2K collaboration, presented the first experimental indication of charge-parity violation in neutrinos.

Charge-parity (CP) symmetry is the theory that elementary particles will act in the same way even when the spatial coordinates are inverted and the sign of the charge they carry is flipped. CP-symmetry has previously been proven to be violated, but only for quarks. It is possible that CP-violation is the reason behind the matter-antimatter asymmetry of the universe (that is, that despite current big bang predictions, the universe is dominated by matter — humans, trees, stuff — and very little antimatter), but only if it is present for leptons as well as quarks. 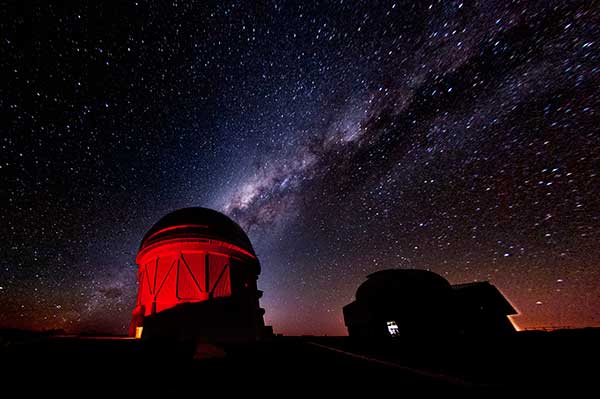 Telescopes at Cerro Tololo Inter-American Observatory in Chile were used to conduct the Dark Energy Survey.

Particle physicists call a 2-sigma result like T2K’s an observation — that is, not yet a definitive discovery. 2-sigma means 95.5% confidence, which might seem like enough, but with so much data in large physics experiments, scientists have mostly agreed that 5 sigma, or 99.99994% is the “gold standard” to claim an actual discovery.

“Today’s result … gives us a reachable target,” Jung said. He expects in the next several years that T2K as well as the NOvA experiment at Fermilab will be able to reach 3 sigma, and once DUNE and Hyper-Kamiokande begin taking data, 5 sigma.

A hand-held neutrino detector weighing about 32 pounds used by the COHERENT collaboration at Oak Ridge National Laboratory reported a 6.7 sigma discovery of coherent neutrino-nucleus scattering. As physicists work to understand the way neutrinos oscillate from one type to another, it is important to also understand what happens when those neutrinos interact with different types of particles. “There are a lot of neutrino cross-sections predicted in the Standard Model, but many have theoretical uncertainties with of 20% or 30% or even 100% … for this one, the theoretical uncertainty is less than half a percent,” Philip Barbeau of Duke University said. According to Barbeau, that means that analyzing the data from this process will open the door for new types of searches for physics beyond the Standard Model. Barbeau is an Analysis Coordinator on COHERENT; he presented the results on August 4.

Right now, COHERENT’s result is within 1 sigma of the Standard Model prediction.

“We were a disparate group of researchers who for over 43 years had been trying to individually observe this on our own,” Barbeau said. In 2012, several different collaborations joined to create COHERENT. “Really, it's now an era of neutrino miniaturization, with this hand-held detector … when you miniaturize technology, new questions and new capabilities pop up as a result.”

Using gravitational lensing data, the Dark Energy Survey (DES) collaboration has analyzed what is to date the largest and deepest segment of the night sky. Using the Dark Energy Camera mounted on the Victor M. Blanco 4-meter Telescope at the Cerro Tololo Inter-American Observatory (CTIO) in Chile, DES found values for the cosmological constant, a “leftover” value in the equations of general relativity that describe the universe. Theorists believe this constant may describe the effects of dark energy that is responsible for the accelerating expansion of the universe. On August 3, DES released data that agrees to one sigma with standard theories. This means that, despite other studies that found values slightly further away from PLANCK/standard theories, the new DES data provide more evidence that the current standard theories of the universe hold.

Describing DES’s data, presenter Daniel Gruen from SLAC said, “The best comparison of structure when the universe was 400,000 years old at 10 billion years old says the simplest model describes the universe well.” The current result covers one year of DES data; there will be three years of data total, with more results to come.

The author is a freelance writer based in Minneapolis, Minnesota.