The public generally associates Samuel Morse with the invention of the telegraph, which revolutionized long-distance communication. But decades earlier, a London cheese merchant turned amateur scientist and inventor, Sir Francis Ronalds, created his own version of an electric telegraph. Ronalds proclaimed, "Give me materiel enough, and I will electrify the world." But the world wasn’t quite ready for his vision; it would be two decades before William Cooke and Charles Wheatstone commercialized the telegraph.

Born in 1788 to London cheesemongers, Ronalds was the second of 11 children. He attended a Unitarian school before taking on an apprenticeship with his father at age 14. When he was just 19, Ronalds took over the family business for several years after his father died. But he also had a strong scientific interest in chemistry and the relatively young field of electricity, carrying out numerous experiments in his own home. He also amassed an impressive personal library of books on electricity, keeping what may have been the first card catalog system to sort them. Eventually he handed off the cheese business to his younger brother so he could pour all his energies into the study of electricity.

Ronalds published his first papers on the dry pile battery and how it generated electricity in Philosophical Magazine in 1814, followed by a description of the first electric clock. He figured out how to record changes in electricity in the atmosphere using an electrograph, and built an "influence machine" capable of generating electricity. He came up with the first description of how induction affects signal transmission in insulated cables, and developed new forms of electrical insulation based on that work.

But his place in history is due to his creation of an electric telegraph at age 28, inspired by his earlier work on electric clocks. In the summer of 1816, Ronalds was living at his mother’s house at Hammersmith. He set up a makeshift laboratory above the stable, and commandeered her backyard to design, build, and test his telegraph, "in which [two parallel] wires were enclosed in glass tubes buried in the ground. At each end of the line a clockwork mechanism turned synchronously revolving discs with letters on them. A frictional electricity machine kept the wire continuously charged, while at each end two pith balls hung from the wire on silk threads, and since they were similarly charged from the wire they stayed apart. When someone desired to send a message he earthed the wire at his end at the moment when the dial indicated the desired letter. At the receiving end the pith balls would fall together when earthed and the recipient noted the letter showing on his dial at that moment. The system was slow and depended on the two dials staying in step, but Ronalds demonstrated that it would work over 150 metres of wire." (1)

Not only did he create the device, he had a vision of a wired world where political leaders could converse across long distances, writing, "Let us have electrical conversazione offices, communicating with each other all over the kingdom."

Excited about the potential for his device and praise from a few colleagues, Ronalds offered his design to the British Admiralty. But the timing was bad: a French apparatus called the semaphore had been developed in the 1790s, and the Admiralty had installed a similar setup between London and Portsmouth just the week before. On August 5, 1816, Ronalds’ vision was soundly rejected by the Secretary of the Admiralty Sir John Barrow, who showed a remarkable lack of prescience when he declared, "Telegraphs of any kind are wholly unnecessary; and that no other than the one now in use will be adopted."

Ronalds took the rejection of his signature invention in stride, insisting he harbored "not a shadow of resentment," although also expressing hope that eventually someone in a leadership role would recognize the value of an electric telegraph for the future of communication. The field continued to advance for the next two decades, until the subsequent inventions of the battery and the electromagnet. That enabled Cooke and Wheatstone to develop their own rudimentary telegraph in 1837. (Some sources say Wheatstone had seen Ronalds’ telegraph as a boy.) Within two years, their system was being used to send messages between local railway stations, as much as 29 kilometers apart. British police relied on the telegraph in 1845 to help capture fugitive murderer John Tawell.

Their approach was ultimately superseded by the telegraph system created by an American portrait artist turned inventor named Samuel Finley Breese Morse. Morse also invented his own system of dots and dashes, which could be combined to represent letters of the alphabet, called Morse Code. He convinced Congress to construct an experimental telegraph line from Washington, D.C. to Baltimore. And on May 24, 1844, he sent the message "What hath God wrought?" from the old Supreme Court chamber in Washington to his partner, Alfred Vail, in Baltimore. By 1869, the East and West coasts were connected by telegraph.

As for Ronalds, he didn’t publish a paper again in Philosophical Magazine for the next 32 years, but he was far from idle. He turned his focus to mechanical and civil engineering, traveling extensively and developing new surveying tools as well as drawing instruments to help artists achieve better perspective in their sketches. He wound up with a strong side business in manufacturing portable tripod stands to support drawing boards for artists working in the field.

Ronalds did live to see his vision come to fruition. And not everyone forgot his contributions: The fledgling Society of Telegraph Engineers (which inherited his formidable library) dubbed him the "father of telegraphy" and declared he "must always stand as the first of English Telegraph Engineering." He was knighted for his efforts in 1870. He died at home near Hastings on August 28, 1873, aged 85. 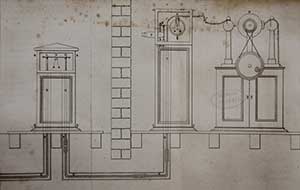 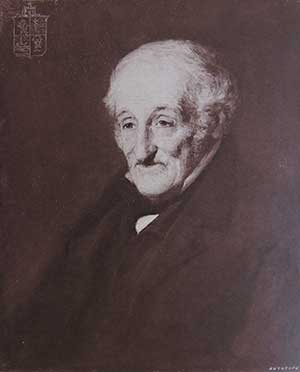