Astrophysicist made fundamental contributions to solar and space plasma physics

The APS Council Steering Committee has voted to award the Society’s 2018 Medal for Exceptional Achievement in Research to Eugene Parker, professor emeritus at the University of Chicago. Parker, 90, is recognized for his "many fundamental contributions to space physics, plasma physics, solar physics, and astrophysics during the past 60 plus years."

"Eugene N. Parker is the dean of the field of space and astrophysical plasma physics," commented Louis Lanzerotti of the New Jersey Institute of Technology. "Parker’s seminal theoretical work beginning in the mid-1950s revolutionized understanding of the solar corona and its production of the interplanetary medium, and the effects of the medium on Earth’s space environment."

"There are very few scientists in the history of science of whom it can be said that they were responsible for the establishment of an entire scientific discipline," said Lennard Fisk of the University of Michigan. "In the late 1950s, as a young untenured professor at the University of Chicago, Gene Parker wrote his seminal paper on the acceleration of the solar wind, predicting that it would be a supersonic flow. This work was ridiculed by more senior, well-established astrophysicists." Parker’s prediction was confirmed by the Mariner 2 spacecraft in 1962 and by the Voyager missions.

"Gene Parker has a wonderful and exceptional record of seminal contributions … over the many years of his distinguished career," said Roger Falcone, chair of the 2018 APS Medal selection committee. "It is remarkable to see so many effects that bear his name."

"Focusing on our nearest star, Gene has taken on the incredibly difficult task of elucidating many of its complexities and has provided the world with new and better understanding of the sun," said APS Chief Executive Officer Kate Kirby.

Eugene Parker received his B.S. degree from Michigan State University in 1948 and his Ph.D. from the California Institute of Technology in 1951. After an assistant professorship at the University of Utah, he joined the faculty of the University of Chicago in 1957. Since then, he has published key papers in solar magnetohydrodynamics, cosmic ray physics, and space plasma physics.

The APS Medal for Exceptional Achievement in Research was initiated in 2016. The first medal was awarded Edward Witten of the Institute for Advanced Study and the 2017 medal was awarded to Daniel Kleppner of the Massachusetts Institute of Technology. The medal includes a prize of $50,000, a certificate citing the contribution made by the recipient, an allowance for travel to the APS Medal Ceremony in Washington D.C. on February 1, 2018 and an invited talk at an APS meeting. 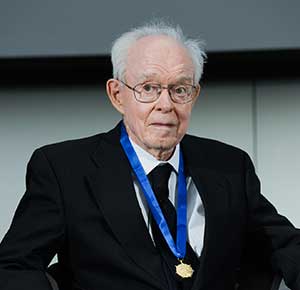