After qualifying exams, countless practice problems, and group preparation sessions, the U.S. physics team set off for Yogyakarta, Indonesia in late July to compete at the 48th annual International Physics Olympiad (IPhO). The seven-day trip, from July 16-24, brought together over 300 high school students from 88 countries to put their physics skills to the test. This year, the U.S. team placed 8th overall in medal count — winning three gold and two silver medals.

“We tied for eighth place in the medal count … about the same as last year’s [competition],” Paul Stanley of Beloit College told APS News. As one of three team leaders for the U.S. Physics team, Stanley is no stranger to the stiff competition of IPhO. “Our medals were better [this year]; they were better for everyone. [But] the exams were challenging … lots of number crunching for the experiment[s], and some pretty heavy theory for the theoretical exam[s].”

All competitors were given two experimental and three theoretical questions that ranged from estimating the speed of galaxy clusters with dark matter, to solving for thermodynamic variables in earthquake and volcanic eruptions. Allotted a mere five hours for the experimental portion of their exam, students were required to tinker with lasers to find the refractive index and diffusion rates of a saltwater solution. Indonesia is also prone to volcanic activity and tsunamis associated with large-scale earthquakes — a perfect opportunity for students to calculate and explore the properties of a new seismic-detecting technology, called the parallel dipole line (PDL) magnetic trap. 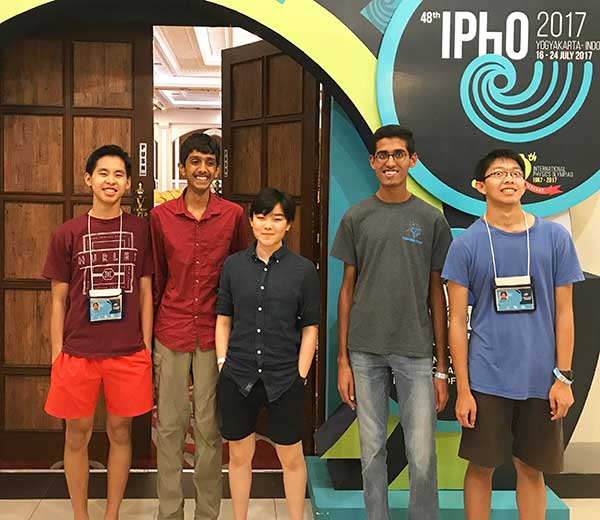 To relieve some of the test-taking jitters, the participants of IPhO were taken to Borobudur Temple, Yogyakarta palace, and Tembi Village. Students made special dyed clothes, known as batik, and were able to play a part in making traditional music.

As a welcoming gesture to the IPhO group, past-president of Indonesia and aeronautic engineer B.J. Habibie created a special video message for this year’s competitors. Habibie, known as “Mr. Crack,” was the first scientist to help fix a problem with failure in aircraft structures known as random crack propagation. His video was presented at the opening ceremony, which offered both students and team leaders bits of inspiration for their difficult competition ahead.

“Everything we have accomplished is inherited by the younger generation … they must be educated and provided the access to more appropriate methods of education. Only then can they be better than those who came before them,” Habibie asserted. “There are two types of physicists [in the world]. One will become like me, and the other will become like Einstein. I hope that participating in this physics olympiad will help guide [these students] to choose where to go when [they] finish [their] education.”

The 48th IPhO 2017 was organized by the Directorate General of Primary and Secondary Education in the Ministry of Education and Culture (MoEC) of the Republic of Indonesia.

To learn more about this year’s IPhO and to see the official results, visit the main homepage.