Easing the Heartache with Magnetic Fields

APS March Meeting 2017 — Following the cures for common diseases in the early 1900s, life expectancy shot up by 20 to 30 years. But living longer has inadvertently created a new set of burdens, especially on the human heart. The complete prevention of vascular disease still remains elusive, and reigns as the leading cause of death since the 1930s. While modern medicine has decreased the heart disease mortality rate — from 64% of total deaths in 1979 to 23% of total deaths in 2014 — heart attacks are still responsible for one in four deaths in the U.S., and strokes are the fifth leading cause of death today.

Aspirin has long been prescribed to ward off a heart attack in those patients who have not yet had one, but there are limitations to the use of this therapy, according to physicist Rongja Tao of Temple University.

"Currently, many people take medicine to reduce blood viscosity, but it can cause serious side effects. From a physics point of view, when viscosity is decreased, the turbulence of the blood flow gets worse … and turbulent [circulation] puts much stress on the heart … we need a new technology to suppress both simultaneously."

At the APS March Meeting, Tao described how exposing a cardiac patient to an intense magnetic field can provide surprisingly long lasting reduction of blood viscosity, with a corresponding drop in blood pressure. This new approach to blood thinning that he is investigating has brought together scientists from the medical and physics departments at Temple University, and has grown in momentum due to its innovative take on combatting heart disease.

"Because of the iron in the red blood cells, [they] are sensitive to magnetic fields," explained Tao. "If we apply a strong magnetic field parallel to the [blood] flow direction, the red cells polarize, and they form short chains." Tao calls this magnetorheology (MR) technology a "promising treatment" for those who are susceptible to heart attack and stroke.

When the cells aggregate into chains, the viscosity of the flow becomes anisotropic, meaning here that the viscosity depends upon the relationship between the direction of the blood flow and the direction of the applied magnetic field. To suppress the turbulence, Tao said, the lower viscosity must be parallel to the blood flow to keep the circulation as laminar as possible. Accordingly, the magnetic field is applied parallel to a major artery. The higher viscosity is then perpendicular to the flow, which reduces the side effect of turbulence and keeps the chains toward the center of the artery.

"Before a magnetic field [is] applied, the [red blood] cells were randomly distributed in the plasma," he described. "Then you apply a magnetic field, at about 1.3 T and the cells align themselves into the chains … in the lab, the viscosity along the flow [in the direction of the chains] is reduced over 25%, and perpendicular it almost doubles to over a 95% increase [over the original viscosity]."

This drastic change (brought about by a magnetic field over one million times stronger than Earth’s magnetic field) occurred over a mere four seconds — and the lower viscosity along the flow and increased oxygen function of the red blood cells, which lasted over 24 hours after treatment (1).

With these results, Tao and his team decided to modify their laboratory setup to perform preliminary clinical trials with volunteers who had high blood pressure. In the trials, the patient’s right arm is inserted along the axis of a powerful electromagnet, so the forearm, and the large artery in it, are parallel to the magnetic field.

"Our results were more wonderful than expected," Tao explained as he showed an example of readings before and after treatment. Prior to treatment, one volunteer’s blood pressure read 140/99 mmHg. "Every minute we read his blood pressure, and after ten minutes, it went down to 115/75 mmHg."

That's equivalent to going from stage one hypertension to a normal range of blood pressure in under ten minutes. And the subjects’ blood pressure after eight hours was only slightly above normal.

"This patient for many, many years, has had high blood pressure, and now he says ‘I hope every morning I can come in for a treatment!’," Tao said. "But 100%, every person [we tested] had their blood pressure down 10 to 20% within 5 to 10 minutes, and had increased oxygen function [in their blood cells]."

Tao has spent much of his research career tinkering with the applications of electrorheology (ER) and MR, in which electric and magnetic fields are used to change fluid flow. From transporting oil through pipelines to rewriting recipes for low-fat chocolate bars, his unconventional applications of ER and MR have produced innovative approaches to a variety of problems.

The blood pressure results caught the eye of the American Heart Association, which is now involved in helping Tao and his team receive formal approval from the FDA to conduct official clinical trials. Tao said he looks forward to one day having this type of therapy for at-risk people to lower their blood pressure without the use of prescribed medicine or invasive surgeries.

"At this point, this technology seems to be wonderful … [and] from a physics point of view, we solved the bigger problem." 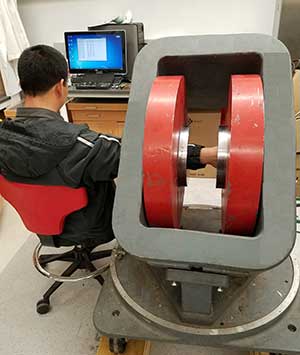