How African-American Women Succeed in Physics

APS March Meeting 2017 — Physicists all know the story about how the Catholic Church excommunicated Galileo for saying that Earth revolves around the Sun. Or how Einstein campaigned for building the atomic bomb after escaping Nazi Germany. This year, audiences learned about Katherine Johnson, an African-American NASA mathematician, in the Oscar-nominated film, Hidden Figures. She worked to send John Glenn to space in an era when NASA’s bathrooms were still segregated.

But less-publicized experiments and equations have stories too. At this year’s APS March Meeting, Felicia Mensah, the associate dean at Teacher’s College, Columbia University, presented the stories of six contemporary African-American woman physicists. A biologist by training, Mensah trains K-12 science teachers and researches how to improve science curricula. Her former graduate student, Katemari Rosa — now a professor of physics education at Brazil’s Universidade Federal de Campina Grande — interviewed these six women in person. They analyzed the many hours of interviews and published the results last August in Physical Review Physics Education Research.

The six women, anonymous in the paper, all have Ph.D.s in physics or a related field such as materials science. Two are assistant professors — one at a private liberal arts college, the other at a public historically black college. Three work for the government, and one is a researcher at a public university.

Mensah and Rosa found these women in an online database of African-American woman physicists — along with some dismal statistics. Based on the database, they estimate that no more than 90 African-American women have Ph.D.’s in physics, astronomy, or an adjacent field. "Black women were 11 percent of all women receiving bachelors degrees in 2010, but only 2.9 percent of women receiving physics bachelor degrees in the same year," they write in the paper.

Rosa, who majored in physics as an undergraduate, wanted to understand why these six Black women chose the field and stuck with it. She found that several cited supportive parents or extended family. They spoke about the necessity of financial aid. In addition, many had science teachers who recommended that they apply for certain scholarships or summer research opportunities when they were in high school. All six participated in summer research experiences during their college years. The women felt "invited" to physics, Mensah says.

But the invitation came with added challenges. Each of the interviewees was the only Black woman in their department at many points in their career. As students, they struggled to find a community. "Being the only one can be very isolating," Mensah says. In particular, other students would exclude them from study groups.

One woman ended up inviting herself. "I’m like, ‘Oh, you guys are studying Tuesday at two? I’m going to come.’ See, I didn’t have to ask, ‘Will you invite me?’ I’m not going to wait for that," she told Rosa.

Desiré Whitmore, who identifies as "Blaxican" — black and Mexican — told APS News about similar challenges integrating into the physics community. (Whitmore did not participate in Mensah’s research.) She earned a Ph.D. in chemical and materials physics from the University of California, Irvine, in 2011. But her entrance into the field was anything but conventional.

"My senior year of high school was really tough in terms of home life," Whitmore says. "My mother was abusive and a drug addict. She had five kids, and I was the oldest, so I had to take care of them."

Her mother wasn’t paying the mortgage or the bills. "We were surviving because of school lunch," Whitmore says. At one point that year, she was homeless.

Her tumultuous home life derailed her plans to attend university immediately after high school. So she attended community college first before transferring to the University of California, Los Angeles, where she majored in chemical engineering.

"When I transferred to UCLA, I found this clique behavior," Whitmore says. "It was like high school all over again." Most of the other students had already taken multiple classes together, and she was the new kid. "They already had their groups, and they weren’t really interested in me joining," she says. "My first quarter — my first year, really — I just studied alone." She found a group only after other students realized that she scored well on exams, she says.

When Whitmore went to graduate school, she found that many assumed she hadn’t earned her success. She received a National Science Foundation Graduate Research Fellowship to work on ultrafast lasers. "I was talking to this guy in my group, and I asked him, why don’t you apply to these fellowships?" Whitmore says. "It’s free money. You get paid to do your research. He said, ‘I’m middle class and White. I’m not eligible for these fellowships.’ I was like, actually you are. They’re all merit-based and have nothing to do with the color of your skin."

After completing a postdoc at the University of California, Berkeley, Whitmore now teaches laser and photonics technology at Irvine Valley College, a community college in California. "I spend a lot of time with my students making sure they understand where I came from," she says. Some of her students are training for jobs as laser technicians, while others plan to transfer to a four-year university — like she did. She wants them to know that higher degrees are within their reach.

Sharing the success stories of Black women physicists is crucial to getting Black girls excited about science, Mensah says. "Science has its own social and historical context, and often we don’t teach it," she says. "Teachers walk into their classroom thinking that they’re just teaching about mechanics." But science teachers who avoid discussing social context implicitly reinforce the historically dominant narrative that physicists are white and male. Students of color pick up on the narrative and may feel excluded, Mensah says. She advises teachers to look for stories about the scientific contributions from underrepresented communities.

A few years ago, Whitmore starred in an online video about spectroscopy. She later received an email from a middle school teacher whose students wanted to ask her about her job. "These three girls are interested in spectroscopy because they see someone who looks like them," Whitmore says. "They see, oh my god, she’s a real scientist. She’s a Black woman, and I’m a Black girl — I can be that when I grow up."

The author, a contributor to Wired and Physics Girl, is based in Tucson, Arizona. 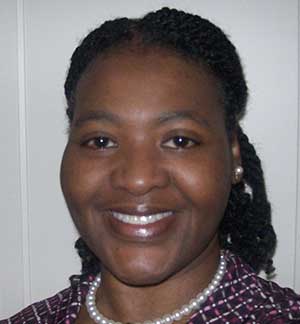 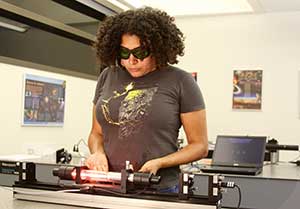