Unveiling the Past with Nuclear Physics

Historians might give an arm and a leg to travel back in time, but scientists have come up with ingenious ways to piece together the past here in the present. From the makeup of Egyptian funerary masks, to the authenticity of Van Gogh’s murals, and the structure of the Florence Cathedral, the 2017 APS March and April meetings both featured research from around the world that painted a better picture of how historical artifacts were crafted.

A Second Look at What’s Underneath

An anthropologist turned restoration expert, Brandi Lee MacDonald of the University of Missouri — Columbia, has been working with a collection of paintings from McMaster University in Canada for over five years. "This is a side project that just snowballed into this long-term project that's still ongoing," MacDonald announced at the APS April Meeting this past January in Washington, D.C. "Right now [the collection] is being shown across Canada. At the end of this summer I’ll be able to access it for research again." 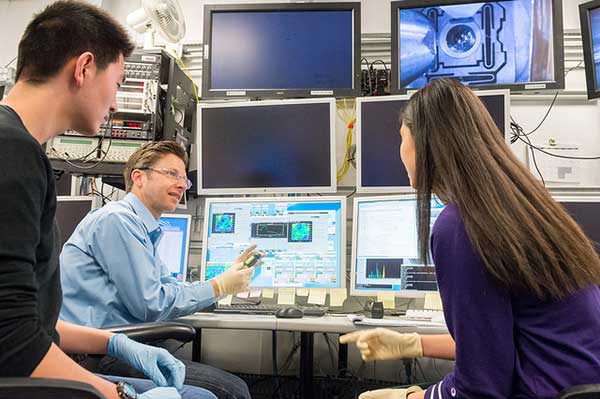 Nine oil paintings, dating back to the 1400s, were chosen by MacDonald and her team to apply analytical methods from physics to answer pivotal art historical questions for the curators at McMaster. "It took a year or two to develop the trust of the curators to start saying, ‘Hey, you know that five million dollar painting you guys have? Can I put it in the core of a nuclear reactor?’," joked MacDonald.

With a suite of techniques in nuclear imaging, the researchers could find out what the paintings were made of, based on their chemical fingerprints. Using a handheld X-ray Fluorescence (XRF) device that can detect the chemical composition of a paint pigment, she confirmed the authenticity of an 18th century Van Gogh still life.

"We used [XRF] to understand the pigment diversity [of the painting], and luckily we didn’t find any pigments indicative of forgery [from that time period]," MacDonald explained. The team also used an XRF mapping system to analyze a one to two mm spot and find out what elements would show up underneath. "It showed elevated amounts of lead and mercury, a main constituent of red pigment and a fleshy tone."

The visual portion of the spot was not skin-colored, however, indicating that another painting was underneath. The high-resolution imaging technique known as neutron radiography revealed the hidden painting, confirming that the cash-strapped artist recycled his canvases.

At Los Alamos National Laboratory, Elena Guardincerri and her team want to draw up new blueprints for the famous Cathedral of Santa Maria del Fiore in Florence, Italy. As physicists, however, their main tool will be custom-built panels of muon detectors to reveal the domes’ inner structure.

"Made up of two shells instead of a single wall, interestingly enough this dome was built without a temporary support structure," Guardincerri explained at the 2017 APS March Meeting in New Orleans. "The dome has cracks through both shells, which are still growing … the largest are about eight centimeters in length. There are a number of [us] who want to reinforce the dome before it falls."

Considered a heritage site by UNESCO, the 14th century dome designed by Italian architect Filippo Brunelleschi has an interior shell more than two meters thick, which is only known to bear brickwork and sandstone. No one knows if there are reinforcement structures, such as steel wire, between the shells. Some historians speculate iron chains are lining the inner walls of the domes, but no one piece of evidence settles the case.

"There are documents that show there were thousands of pounds of iron purchased during the construction of the dome, but the iron is mostly unaccounted for," said Guardincerri. "So [my team and I] thought we could use muon radiography to look inside this wall."

Heavier cousins of electrons, muons are the by-product of cosmic ray interactions with Earth's atmosphere. Known to penetrate objects hundreds of meters thick, muons afforded Guardincerri and her team the perfect way to paint a picture of what lies sandwiched between the shells of the domes. "By measuring the scattering angle, we can tell what the material was if we know the thickness of the material," explained Guardincerri.

A mock-up measurement was done at LANL in 2015 — her students built a replica of the dome’s thickest inner wall and hid three iron bars inside it. Two muon trackers, placed on either side of the wall, took data for 35 days, which produced a composite image. Although her team took measurements for a whole month, the steel bars were visible after only 17 days of data collection.

Guardincerri reported the results in Florence, and was approved by the cathedral’s guild to develop thinner, portable muon trackers to install in the dome. The detectors to be used in their project are being built at the Georgia Institute of Technology, and she plans to begin muon imaging in January 2018.

"We will make pictures of select parts of the dome that will take a month for each image," said Guardincerri. "We will take three to four images at first to get a whole slice of the dome … and if the results are good and we find the iron chain (or something else), we will follow it all the way around [to look at] if it’s broken [for restoration purposes]."

The Next Generation of Egyptian Historians

Decadent and mysterious, the ancient Egyptians left a vast variety of exotic relics behind — many of which are proudly shown off by museums and curators around the world. One of these conservators is Naperville Central High School, near Chicago, Illinois. As the only high school to own an Egyptian mummy, their oldest student (named Cleo) is known to be 2,000 years old, donated to the school in the 1940s by a man who apparently bought him in an Egyptian curio shop.

Volker Rose of Argonne National Laboratory in Chicago, IL, has used his experience with XRF and radiography to aid the school’s students in examining the materials of pyramids and samples of Cleo, using the world-class equipment housed at Argonne’s Advanced Photon Source.

"Because we are talking about a high school project, we don’t have all the time in the world compared to a typical research group," Rose explained at the 2017 APS March Meeting. "We have been working for about half a year preparing [this] project, [but] we are very ambitious and we want to learn a lot … what we are getting out of this kind of work is so far at the publication level."

Rose and a select group of students have examined whether the building blocks of Egyptian pyramids were poured or carved of stone. Analyzing the materials for common elements like aluminum allowed Rose and his student researchers to relate the chemical structure to that in an authentic sample of Egyptian stone.

"There are some indications in the known microstructure [of pyramids] that they might be poured out of material, and [the students and I studied] geopolymers to understand the chemical makeup, and answer this long-debated question," said Rose. "It’s harder than we thought to get a real sample, though …"

For his current project, which started at the end of March, his students will use XRF techniques to examine what kinds of materials were used in the funeral mask that covers Cleo’s face, to look back in time to examine the cultural practices of her morticians.

Rose is known for his work with the Art Institute of Chicago in 2013, which revealed through microscopy that Picasso was the first to use common household paints in his later artwork. As a result, he developed a passion for art and science, which he now says fuels his drive to give younger generations of high-school students, like ones at Naperville, a chance to work hands-on with applied physics tools through Argonne’s Exemplary Student Research Programs.

"Science and the heritage of art defines who we are as people, so I think it's important to protect it and teach others that they can benefit from each other," said Rose. "It’s our duty to work with the general public and high school students, and [these experiences] are opening up doors for me to directly engage with our next generation of scientists … it’s very inspiring."