In 1882, James Franck was born in Hamburg, Germany, the descendant of Jews who had immigrated from Portugal generations earlier. He received his Ph.D. from the University of Berlin in 1906, and remained there until 1918. In 1914 he did his most celebrated work there on the scattering of electrons by mercury atoms. His joint papers with Gustav Hertz "entered their names on the rolls of the history of physics" [1]. His contributions to the understanding of physics; his stances taken, at personal peril, on moral issues; and his positions taken at the intersection of science and politics — these together made him one of the few scientists to be recognized so broadly [2]. He was truly a man for all seasons.

The first Franck-Hertz experiment [3, 4] established the existence of discrete energy levels in mercury atoms. It was a joint effort by Franck and Gustav Hertz, the nephew of Heinrich Rudolph Hertz, whose experiments revealed the existence of the electromagnetic waves that had earlier been proposed theoretically by James Clerk Maxwell. The Franck-Hertz apparatus used a straight wire cathode, heated electrically to produce electrons by thermionic emission. It was immersed in an atmosphere of mercury vapor at a temperature around 120 °C with a vapor pressure of around one mm. Electrons emitted by the cathode were collected by a platinum anode after passing a mesh screen, or grid.

A voltage V, applied between cathode and grid, accelerated electrons toward the grid. A small retarding voltage between the anode and grid prevented electrons with very low energy from being collected. As Franck and Hertz increased V, the current collected by the platinum cylinder anode increased as well. This meant that the electrons passed through the mercury vapor almost without energy loss. Given the dimensions of the cell and the collision cross-section for electrons with the mercury atoms, the electrons would have several hundred collisions with the atoms on passing from the cathode to the platinum net. Thus, the collisions were elastic, with little energy loss by the electrons to the atoms. A crude analogy would be to compare the electron to a bullet passing through a gas, suffering many elastic collisions with minimal energy loss or deflection.

But when V reached ~ 4.9 eV, suddenly the current fell nearly to zero. This meant that, at 4.9 eV, an electron lost nearly all its energy in a collision and could no longer overcome the retarding voltage and reach the anode. At first, Franck and Hertz believed that this was due to ionization of the mercury atoms by collision with electrons, but they soon understood that this energy loss was due to the existence of a discrete energy level between the ground state and the ionization level of the mercury atom. This was the first experimental demonstration, outside of spectroscopy, of the discrete atomic energy levels hypothesized in Bohr’s theory of the hydrogen atom, published shortly before.

In the physics community, the effect of their discovery was stunning. After the lecture, Albert Einstein said to Lise Meitner, "It’s so lovely it makes you cry" [2]. In a second paper [5] they showed that 4.9 eV excited emission of the 2537-Å UV line of the mercury atom.

Later, Franck took time off from his scientific career to serve as a volunteer in the German army during World War I and was seriously injured in a gas attack. After the war he returned and, in 1920, became professor of experimental physics at the University of Gӧttingen, then an important center for quantum physics. In 1925 he formulated what became known as the Franck-Condon principle, the basis of our understanding of the electronic spectra of diatomic molecules, and of more complicated molecules as well.

In 1933, Adolf Hitler passed the discriminatory legislation that prevented German Jews from holding government positions. Franck was exempted from the exclusion because of his service in World War I, but, "He chose to risk his career and personal safety by resigning his position so as not to be forced to dismiss his Jewish colleagues and students" [2]. He was the first German academic to do so.

He left Germany and went on to several temporary academic positions in Europe. In 1940, fearful that the German Army would confiscate their gold Nobel medals, Franck and German Physicist Max von Laue left their medals for safekeeping at Niels Bohr’s Institute in Copenhagen. At one point, invading German troops entered Copenhagen and were marching near the Institute. They would surely confiscate the medals. What to do with them? In great haste Hungarian chemist, George de Hevesy, who was at the institute, dissolved the gold medals in aqua regia, a mixture of nitric and hydrochloric acids, and put the bottle containing the yellow liquid, inconspicuously, on a shelf. There it remained until after the war. The gold was then recovered and sent to the Nobel Society. They recast the medals and presented them to Franck and von Laue [6].

Franck came to the United States and spent most of his remaining career at the University of Chicago. After participating in the Manhattan Project, in a June 1945 report, he urged authorities to have a demonstration explosion of a nuclear weapon to achieve peace with Japan without actual use of the weapon. He then joined an unsuccessful effort to avert a nuclear arms race. His stand on the issue reflected his entire life of moral engagement on public issues. He died suddenly in May 1964, while visiting Gӧttingen. 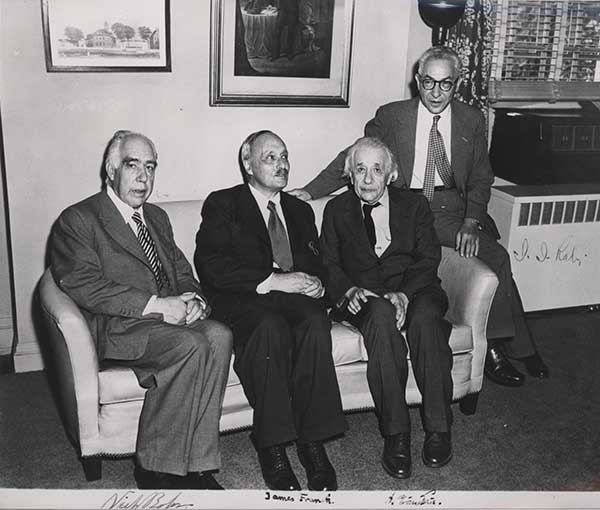