Author note: The Greatest Story Ever Told — So Far describes the revolutionary changes that have taken place in our understanding of the universe as a result of the development of the standard model of particle physics, its testing, and its implications for our past and future. Beginning with Plato, the story quickly moves to the 20th century and in particular describes developments since the 1950s, including the importance of the notions of gauge symmetry and spontaneous symmetry breaking in modern physics, which I think are not fully appreciated in the popular consciousness. Indeed the period 1955-1975 — during which we emerged from great confusion in the growing elementary particle zoo, and went from understanding just one to understanding three of the fundamental forces in nature as fully consistent relativistic quantum theories governed by gauge symmetries — could be viewed as altering our understanding of the fundamental nature of our existence in a way that is comparable to the amazing decades from 1905-1925, which brought us special and general relativity and quantum mechanics.

"These are the tears of things, and the stuff of our mortality cuts us to the heart."

So said Virgil as he penned the first great epic story of the classical era. They are the words I chose to use as the epigraph of this book because the story I wanted to tell not only contains every bit as much drama, human tragedy, and exaltation, but it is ultimately motivated by a similar purpose.

Why do we do science? Surely it is in part so that we can have greater control of our environment. By understanding the universe better we can predict the future with greater accuracy, and we can build devices that might change the future — hopefully for the better.

But ultimately I believe we are driven to do science because of a primal urge we have to better understand our origins, our mortality, and ultimately ourselves. We are hardwired to survive by solving puzzles, and that evolutionary advantage has, over time, allowed us the luxury of wanting to solve puzzles of all sorts — even those less pressing than how to find food or to escape from a lion. What puzzle is more seductive than the puzzle of our universe?

So what do we do with this information? Is there special significance here for understanding our human story? In the midst of this cosmic grandeur and tragedy, how can we reconcile our own existence?

For most people, the central questions of existence ultimately come down to transcendental ones: Why is there a universe at all? Why are we here?

Whatever presumptions one might bring to the question "Why?", if we understand the "how" better, "why" will come into sharper focus. I wrote my last book to address what science has to say about the first of the above questions. The story I have related here provides what I think is the best answer to the second.

Faced with the mystery of our existence, we have two choices. We can assume we have special significance and that somehow the universe was made for us. For many, this is the most comfortable choice. It was the choice made by early human tribes, who anthropomorphized nature because it provided them some hope of understanding what otherwise seemed to be a hostile world often centered on suffering and death. It is the choice made by almost all the world’s religions, each of which has its own claimed solution to the quandary of existence.

The second choice when addressing these transcendental mysteries is to make no assumption in advance about the answer. Which leads to another story. One that I think is more humble. In this story we evolve in a universe whose laws exist independently of our own being. In this story we check the details to see if they might be wrong. In this story we are going to be surprised at every turn.

The story I have written here describes a human drama as much as a universal one. It describes the boldest intellectual quest humans have ever undertaken. It even has scriptural allegories, for those who prefer them. We wandered in the desert for forty years after the development of the Standard Model before we discovered the Promised Land. The truth, or at least as much of the truth as we now know, was revealed to us in what for most people seems to be incomprehensible scribbles: the mathematics of gauge theories. These have not been delivered to us on golden tablets by an angel, but rather by much more practical means: on pieces of paper in laboratory notebooks filled through the hard work of a legion of individuals who knew that their claims could be tested by whether they correctly modeled the real world, the world of observation and experiment. But as significant as the manner by which we got here is that we have gotten this far.

At this point in the story, what can we conclude about why we are here? The answer seems all the more remarkable because it reveals explicitly just how deeply the universe of our experience is a shadow of reality.

I also began this book with a quote from the naturalist J. A. Baker, from The Peregrine: "The hardest thing of all to see is what is really there." I did so because the story I have told is the most profound example of this wise observation that I know of.

I next described Plato’s Allegory of the Cave because I know of no better or more lyrical representation of the actual history of science. The triumph of human existence has been to escape the chains that our limited senses have imposed upon us. To intuit that beneath the world of our experience lies a reality that is often far stranger. It is a reality whose mathematical beauty may be unimpeachable, but a reality in which our existence becomes — more than we might ever have imagined in advance — a mere afterthought.

If we now ask why things are the way they are, the best answer we can suggest is that it is the result of an accident in the history of the universe in which a field froze in empty space in a certain way. When we ponder what significance that might have, we might equally ponder what is the significance of that specific ice crystal seen in the early morning frost on a windowpane. The rules that allowed us to come into being seem no more worth fighting and dying for than it would seem to be to fight and die to resolve whether "up" in the ice-crystal universe is better than "down," or whether it is better to crack an egg from the top or the bottom.

Our primitive ancestors survived in large part because they recognized that nature could be hostile and violent, even as it was remarkable. The progress of science has made it clear just how violent and hostile the universe can be for life. But recognizing this does not make the universe less amazing. Such a universe has ample room for awe, wonder, and excitement. If anything, recognition of these facts gives us greater reason to celebrate our origins, and our survival.

To argue that, in a universe in which there seems to be no purpose, our existence is itself without meaning or value is unparalleled solipsism, as it suggests that without us the universe is worthless. The greatest gift that science can give us is to allow us to overcome our need to be the center of existence even as we learn to appreciate the wonder of the accident we are privileged to witness.

Light played a major role in our story, as it did in Plato’s allegory. Our changing perception of light led us to a changing understanding of the essence of space and time. Ultimately that changing perception made it clear that even this messenger of reality that is so essential to us and our existence is itself merely a fortunate consequence of a cosmic accident. An accident that may someday be rectified.

It is appropriate here to recognize that the line in the Aeneid that follows the epigraph with which this book began was the hopeful cry "Release your fear." A future that might bring about our end does not negate the majesty of the journey we are still taking.

The story I have told is not the whole story. There is likely to be far more that we don’t understand than what we now do. In the search for meaning, our understanding of reality will surely change as the story continues to unfold. I am often told that science can never do some things. Well, how do we know until we try?

This story ultimately does not give the past special significance. We can reflect upon and even celebrate the road we have taken, but the greatest liberation, and the greatest solace that science provides, come from perhaps its greatest lesson: that the best parts of the story can yet be written.

Surely this possibility makes the cosmic drama of our existence worthwhile.

The author is Director of the Origins Project and Foundation Professor in the School of Earth and Space Exploration at Arizona State University. He is the author of over 300 scientific publications as well as 10 popular books, and writes frequently for newspapers and magazines as well as appearing on radio and television, and in films. He is a Fellow of the APS and has won the Society’s Lilienfeld Prize and Burton Award, as well as the Oersted Medal of the American Association of Physics Teachers and the Gemant Prize of the American Institute of Physics.

This article is reprinted from The Greatest Story Ever Told — So Far by Lawrence Krauss (copyright 2017), published by Atria Books and reproduced with permission of Simon & Schuster and the author. 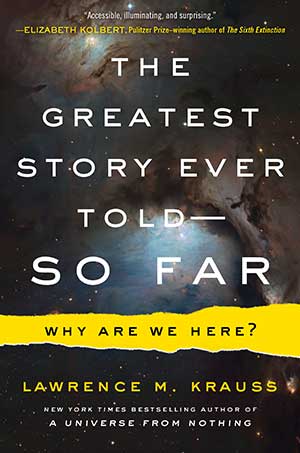 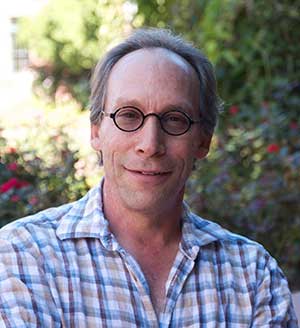