On January 1, 2017, Laura Greene became the 103rd president of the American Physical Society. She is currently serving as the chief scientist of the National High Magnetic Field Laboratory (MagLab) and Professor of Physics at Florida State University. APS News sat down with Greene to discuss her initial plans and expectations for her yearlong term as APS President. This interview has been edited.

What are your duties as APS President?

I think my main job is to protect our members and to listen to what their needs are. If members of a unit come to me and want change, we have to listen to them. Another priority is to keep our journals healthy. I'm not sure what will happen with open access. I'm not opposed to it, but we need to figure out the economic model. I’m willing to work with APS Editor in Chief Pierre Meystre and Publisher Matthew Salter to figure out the details. Along with economics, there is the journal content. Pierre working with Matthew will assure the quality of the journals remains intact. We also want to look at a new way to determine impact factor for our journals. And having the APS Director of International Affairs, Amy Flatten, here at APS, who has guided me for years, will be crucial to my presidency. I’m looking forward to doing a lot more work with her.

How do you feel about your physics career thus far?

I never guessed my life would be this fantastic and I've experienced a lot. Firstly, I'm addicted to physics and I'm so lucky to be in it. I’ve always called it "seductive and consuming." Not thinking I could ever get a job doing it, I thought that after grad school I was going to be a machinist because I really liked machining. And I thought that if I could ever get a job teaching physics, and maybe every few years go to a conference, I would've considered myself extraordinarily lucky.

What is your current area of physics research?

The physics keeps getting better; I'm so captivated by correlated electrons. I like to compare correlated electrons to dark energy. So that's my latest colloquium, because it's such a fundamental concept. But how do you get that across to others? It’s a really hard, complex problem and I'm really drawn to it.

As you start your new presidency, what do you aim to accomplish?

My theme this year is science diplomacy. I learned that science is completely international and, during science discussions, no one gives a hoot what your background is. Then discussions can go beyond science — maybe to family or music — and that leads to broad friendships beyond borders. Let’s just sit at the same table and talk to each other. If we know how to communicate through science, we can branch out into other areas... It doesn't matter what the line or subject of communication is, but there needs to be a starting place.

Also, human rights, diversity, outreach, and public engagement — these are things I put a lot of time into it and that I really care about. You can't have science diplomacy without all of these things, and you can't do good science without them. When you have people from different countries, different genders, different outlooks, we can look at problems differently, and the diversity of approach helps you solve problems. Even diversity between fields: I would like to see high energy physics and cosmology connect even more with condensed matter. Those are the kinds of things that can be very exciting — and that I try to promote.

What makes you feel so strongly about communication?

So many answers! When I made some discovery about 20 years ago, it wasn't expected, and I would basically have people just not believe even the experimental results. They really attacked me and I would get angry … but mostly at myself. I was wondering what I was doing wrong, thinking, "How do I communicate this with people to get them to understand?" It was my charge to find the mode of communication — a challenge that was worth it. Also, communicating the beauty and importance of science to the general public is not only fun, but it helps us stay strong as a field.

Do you see any parallels with the importance of communication in the new presidency under Donald Trump?

After the latest election, I've realized that science diplomacy, which is by definition, using the language and actions of science to create a better world, and to understand each other's philosophies … to see the world out of each other's eyes … that idea has to be applied within our borders.

I know there are people in APS who did not vote the way I did, and I honestly don't know how to communicate with them. They are probably a minority, and as a minority, I have to protect and learn how to interact with them. I want the members to tell me what is the best way to do that, and I'm not doing my job unless I'm really trying.

This is unknown territory — we have a president that doesn't have a political background, and many are looking at worst-case scenarios. Let’s just make sure both sides know what the other is thinking. In most areas of science and technology research, the U.S. is number one in the world, and we don't want to lose that status. I think if we can start and keep the conversation going across the political boundary, we will come to an understanding of the importance of funding fundamental and applied science — maybe it won't look like the model we have now, but we will figure it out … together. And remember, people can heatedly disagree with each other on physics questions, but they still are colleagues and have many things in common — especially their love of science!. So I want APS members to come to me… let's use the language of science to converse. Hey — I’ve even started a Twitter account: @laurahgreene — let’s follow each other! 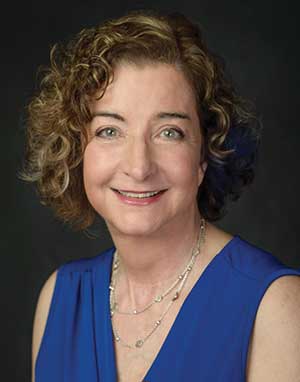