Woman Physicist of the Month

Chuhee Kwon is a professor and past chair in the Department of Physics and Astronomy at California State University Long Beach (CSULB). She strongly believes that education is the key to upward mobility and advocates for making a level playing field for everyone in physics. As a P.I. and co-P.I., she has received over $2.4 million in external grants, half of which was for outreach and diversity-enhancing programs, including the Physics Teacher Education Coalition (PhysTEC), National Science Foundation Scholarships in Science, Technology, Engineering, and Mathematics, and the APS Bridge Program. Under her leadership, the department has more than tripled the number of undergraduate majors and eliminated the achievement gap in gender/ethnicity. Kwon received the 2010 Advancement of Women Award from the President’s Commission on the Status of Women, as well as the 2013 Faculty Award for Excellence by the College of Natural Sciences and Mathematics at CSULB. Her research specialty is condensed matter experiment, and she has over 90 peer-reviewed publications in superconducting and magnetic thin films. More than 10 of these papers have undergraduate and master’s student co-authors. She received her B.S. and M.S. in physics from the Seoul National University and the Pohang Institute of Science and Technology, respectively, and her Ph.D. in physics from the University of Maryland, College Park.

Nominate the next Woman Physicist of the Month 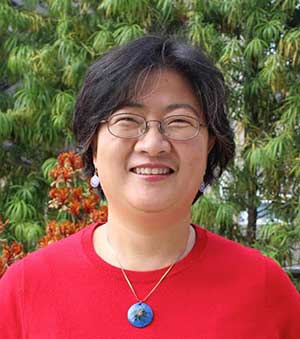 Sites Announced for 2018 Conferences for Undergraduate Women in Physics (CUWiP)

Interested in hosting an Undergraduate Women in Physics conference in 2019? Fill out an expression of interest form at the Application to Host a Conference page.

The 2017 edition of Conversations, the newsletter of the APS National Mentoring Community (NMC), is now available online. Read highlights from the recent NMC Conference, meet an NMC mentor and mentee pair, and learn about how to prepare students for diverse careers, including careers in industry.