Physics at the Broadcom MASTERS Competition

For the past six years, the annual Broadcom MASTERS (Math, Applied Science, Technology and Engineering for Rising Stars) competition has encouraged middle school students to explore the world around them. The 2016 finalists tinkered and toyed with their experiments to create the ultimate science fair projects. A program of the Society for Science & the Public and the Broadcom Foundation, the 30 finalists had a one-of-a-kind competition, full of STEM challenges to demonstrate their skills (like coding Raspberry Pi minicomputers and building robotic crab arms).

Among the finalists (15 girls and 15 boys) were some students who pursued their passion in physics. APS News got a chance to sit down and chat with four of the finalists to figure out what inspired them, and the different physics challenges they faced along the way. These interviews have been edited for length. 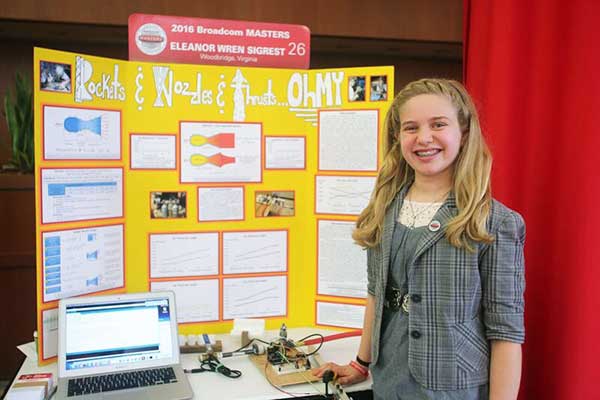 Ashini Modi and James Fagan are winners of the Rising Star award, who are recognized for their promise as the youngest competitors. Their prizes won them a trip to Los Angeles in May 2017 as the United States delegates to Broadcom MASTERS International and Official Observers at the Intel International Science and Engineering Fair (ISEF), the world’s largest international high school science fair competition.

My dad would always read me articles from magazines like Sky and Telescope, and they would always have these cool discoveries. One article was on dark matter… he read it to me and afterward, I had so many questions for him. Finally, he had enough of me, and signed me up to visit the radio telescope in West Virginia (Green Bank Observatory), where I ended up collecting some of my observations.

Was your hypothesis correct, or did you learn something new through your observations?

My hypothesis was correct! I thought the neutral hydrogen [molecules] in our Universe would be rotating faster as distance increased from the galactic center. I observed a lot of invalid data from radio frequency interference, too. I had to take out about 200 data points and reobserve to get the right data. It took about 7 months to complete my observations, actually, and I found that the Andromeda Galaxy was going to collide with us much sooner than the predicted time, about 1 billion years, (compared to the previous prediction of 4.5 billion years).

Did you ever struggle to understand any concepts of physics during your analysis?

I used a lot of physics, like Newton's and Kepler's laws. It was really hard for me to understand Newton's laws in my project. The [version] that we learned in school, we took to a whole new level in my project — making a new formula and everything. But now I understand them much better because of my work.

Who would you consider your biggest inspiration in your science interests?

I’ve read all of his books, although some things were too complicated to process at my young age, but Stephen Hawking is definitely my role model, because he has such a big disability but yet he keeps on making amazing discoveries.

James Fagan | Riverside, CA | Age: 10
A Wind Tunnel to Test for the Best Aerodynamic Characteristics for Flight on Mars

What was your experiment about?

This year's project was to find out what wing would create the most lift with respect to drag, but next year I want to experiment with propulsion, which I don’t know much about. I need to study this because I want to be an aeronautical engineer, and I want to be the first person to land on Mars.

How did you overcome problems you had during your experiments?

I guess if I didn't understand a concept, I would look it up and do a lot of research, and talk to my dad over dinner. He taught me how to use glues, and what types of glue to use for [each experiment]. He’s an electrical engineer so he knows a lot.

Was your hypothesis correct?

It was kind of 50/50. My hypothesis about which airfoil would generate the most lift was correct, but I did find out that my understanding of what was going on was based on a faulty lift theory, so I had to rethink my hypothesis.

What was something new about physics you learned while testing your airfoils?

Two of my airfoils were really interesting to me. I tested out one of them, and it had turbulent airflow which detached from the surface. Then I learned about the Coanda effect [in which a flow strongly attaches to a surface], and with that in mind I got the idea to cut a quarter roll in half and tape it onto [that] airfoil, and it ended up streamlining [in the wind tunnel] like a conventional airfoil. It showed an increase of lift up to 230 percent, and reduced the drag by up to 50 percent!

How did you get access to a wind tunnel…?

My first wind tunnel I built in a day, using a computer fan, some straws and a balance scale. The air speed wasn’t very high... it got up to about 2 miles per hour. It gave me results, but after doing some research, I improved my wind tunnel — it now gets up to 25 mph, and it’s a closed circuit. I built my wind tunnel out of household materials… the body was made out of extra large water bottles, and the laminar flow chamber was made out of party straws. My power source was a vacuum cleaner, and my test section was made out of my lego display case!

Nathan Deng was awarded the Lemelson Award for Invention for seeking to solve a real-world problem through an invention. Through his research, Nathan sought to find an efficient cleaning method that is sustainable and environmentally safe, and was awarded $7,500 by the Lemelson Foundation.

When you first started, what did you think the outcome was going to be?

Were all three of your hypotheses correct?

What was the hardest challenge you faced while carrying out your research?

At first, I was going to buy a professional scientific instrument called a stalagmometer, but it was way too expensive, costing $1000 on Amazon. That didn’t stop me though... I decided to develop my own apparatus that is similar to the stalagmometer and uses the principle of drop weight to calculate surface tension of fluids.

What was your favorite part of performing your experiments?

It was developing and refining my apparatus and finally seeing the results of my surface tension calculation within <1% of published values. From developing my apparatus, I learned that good inventions do not need fancy or expensive equipment, and that starting out simple can be more productive, and fun… I want to continue my research beyond my current results, especially on biosurfactants and improving and developing my apparatus so that I can distribute as a kit to people around the world.

Did you ever struggle to understand the physics background during your research?

Yes, I had some difficulty understanding some of the physics concepts at first… trying to understand some of the chemistry and physics aspects. [Like] "how does small concentration of NaCl lower the CMC [critical micelle concentration, which measures the surfactant efficacy] of my surfactant in water?", or "why does salt increase surface tension of water?" I have a couple of questions on the underlying mechanisms and more plans to investigate with different types of surfactants and electrolytes.

Who served as your biggest mentor with your project?

At school, my biggest mentor was my 8th grade science teacher, Ms. Davignon. She lent me a lot of my equipment (such as lab stand, clamps, test tubes), and she taught me, along with the rest of the class, the basic concepts of chemistry that were necessary for me to understand the science behind my project. But at home, my father helped me with the more difficult and advanced parts of the project, such the Excel graphing and the Lee-Chan Pogaku function for the Harkins and Brown Correction Factor. He also did some of the experimenting with apparatus so the it could be ensured that the apparatus worked consistently for different people.

What inspired you to pursue this project?

Wren Sigrest: When I saw SpaceX attempt the first landing of the Falcon 9, I was amazed watching the rocket tip and seeing a burst of exhaust explode from the side. It was fighting a losing battle — [but] I was inspired. How could I keep the first stage from tipping? … I wanted to do a project related to the real world, and I’ve always loved rockets and space. I was lucky to meet a couple of SpaceX engineers out in California who helped me brainstorm ideas. Later they spent hours with me in their rocket lab back at MIT, explaining and sharing and more explaining and giving me tours — I was hooked! I’ve devoured rocketry books and thermodynamics lessons they’ve sent me, and they poured their hearts out into teaching me. I’ve learned so much. I learned cold gas rockets are used as stabilizers for the first stage, but little engineering data is available; engineers rely on rules-of-thumb.

When you first started your investigation, what did you think the outcome was going to be?

What was the hardest challenge you faced while carrying out your research?

My initial comparison of theoretical predictions and experimental results showed a large difference, and I didn’t understand why. My compressor wasn’t able to produce the chamber pressure I was expecting, and there was still a huge difference between my predictions and results. I reviewed my sources and realized that I had designed my nozzles based on an optimum expansion ratio, meaning the pressure at the nozzle exit equals atmospheric pressure. But with a reduced chamber pressure [in my experiments], my nozzle pressure was less than the atmospheric pressure. My nozzles were over-expanded causing them to produce significantly less thrust… I had to recalculate my predictions, which was a much more difficult thrust equation to solve.

What resources did you use if you were confused with a problem?

If I was having a hard time understanding something, I would read literature. If I still didn’t understand, I would talk to my dad. But even after talking to my dad, I might need a different explanation, so I would call my mentors at MIT. They were almost always able to explain the concept in terms that I could understand. On the rare occasion, I would let my mind sit and come back to the problem later. Giving myself a chance to take a break allowed me to think of information or some experience from my past that I could compare to, then the lightbulb would go off in my head!

When you get older, what do you want to do as a career?

I am going to be an astronaut… more specifically, a mission specialist in computer science. I am going to send my research paper to SpaceX, get my pilot's license, and I AM going to be the first person on Mars!