The APS Office of Public Affairs Helped More than 2,000 Members Advocate for Science During 2016

The APS Office of Public Affairs (OPA) worked with more than 2,000 Society members for a record-setting grassroots advocacy effort in 2016. They delivered a strong message about science to congressional representatives by writing op-eds, sending letters, making phone calls, and participating in local and Capitol Hill meetings.

"We had a nearly 20% increase in APS-member involvement from 2015," said Francis Slakey, interim director of OPA following the departure of director Michael Lubell. "But it’s not just the numbers that matter. We’re working to make sure that our members have constructive interactions with their elected officials."

OPA introduced several changes in the grassroots efforts in 2016 to enhance the impact of member engagement. "One shift we made," said Slakey, "was to focus more on state-based activities." Tactics included targeting local op-ed pages, and making phone calls and district visits in states such as South Dakota, Texas, and New York.

"In Senator Gillibrand’s office, I met with Niambe Tomlinson, and we had time for a much longer discussion — nearly 40 minutes — that rarely happens in a meeting in the D.C. office," said Scott Franklin, professor of physics and astronomy at Rochester Institute of Technology. "I was able to take a student, so the aide got a good idea of my work through both my eyes and those of a student. We’re in the process of arranging a lab visit now."

The staffers were receptive to the issues raised by APS members. In one case, a staffer offered to travel to the University of Buffalo campus to meet APS members, leading to a nearly two-hour discussion and tour of the physics department.

Slakey said OPA was especially effective in making inroads in the office of U.S. Sen. John Thune (R) of South Dakota. Piali De, CEO and co-founder of Senscio Systems, a health-technology firm in South Dakota, worked with OPA to participate in a Capitol Hill event, attend a meeting with Senator Thune, and write an op-ed linking science and innovation to jobs in South Dakota.

"We had 408 APS members sign and email letters to their congressional representatives, amounting to roughly 25% of the U.S.-based attendees who were eligible," said Greg Mack, APS government relations specialist.

Mack added that the percentage of members who signed the letters was significantly higher than at previous meetings.

"We are excited that more APS members are contacting their congressional representatives. Not only do elected officials become better informed about science because of this activity, but they also learn that it’s a priority for their constituents," he said.

OPA will make additional changes in 2017 to enable stronger engagement from APS members. After researching the ways local and D.C. congressional staff most effectively receive information, OPA is broadening the technology available to APS members to contact their elected officials.

Beginning at the APS April Meeting 2017 (held this coming year in January), and building through the year, members will have the option to communicate with Congress using a range of social media platforms. "We plan to include opportunities for members to personalize their letters and tweet to their members of Congress," said Mack.

In addition, OPA will provide members with background information and legislative action guides on a broader range of policy issues, including education, energy, and the environment.

OPA will also unveil a new grassroots advocacy dispatch in 2017, called Signal Boost. The monthly newsletter will be sent via email, contain a short video briefing members on policy issues and identify opportunities to get involved.

"We will also profile APS members who have terrific stories to tell about their advocacy efforts," said Mack. "There’s no magic to effectively engaging with members of Congress; the key is having the right information and approach — Signal Boost will be a guide."

For more information about OPA’s activities, visit the Policy and Advocacy page. To receive Signal Boost and/or learn more about getting involved with grassroots activities, contact Greg Mack at mack@aps.org. 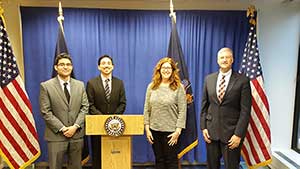