In this series of articles, APS News sits down with APS employees to learn about their jobs, their goals, and the things that make them tick. This month we chat with Irene Lukoff. She discusses her role as the director of development and future goals for the society and its development.

When did you join APS?

I started in August 2016. Prior to that I served briefly as vice president for philanthropic partnerships at the Aspen Institute. A significant portion of my career has been in service to the University of Pennsylvania, where I spent 26 years in various administrative and development roles across three of its major schools — Arts & Sciences, Wharton, and Perelman School of Medicine. I started as a major gifts officer for Basic Sciences and rose to senior director of development, overseeing a number of interdisciplinary centers and institutes with a focus on healthy aging and the neurosciences.

What does a Director of Development do?

I help organizations grow, develop, and make connections. My primary job is matching donors’ philanthropic passions with the institution’s mission, funding needs, and strategic priorities — what most folks associate simply with "fundraising" — but it’s much more than that. Here at APS we are looking for donations to support outreach and educational programs that raise awareness about physics and what physicists do, and benefit not only our membership, but society at large. They strengthen the community of physicists as an advocate for science in general, and physics in particular.

How is fundraising different for APS compared to the academic organizations you previously worked for? Penn Medicine in particular.

Unlike my previous positions, where I was raising funds for the production of basic, translational, or clinical research, here we are primarily raising funds to honor physicists and their professional legacy with the goal of inspiring others to those pursuits — somewhat different and more challenging, in that it is one step removed from the product.

For example, I used to raise money from alumni or friends of the University of Pennsylvania who wanted to invest in cures for illnesses like Parkinson’s and Alzheimer’s. APS is different, in that I am not directly advancing physicists’ research, but rather raising awareness about and celebrating their work and legacy — with the hope of inspiring the next generation of physicists to pursue breakthrough science that will advance our civilization. A key focus of our activity here is to raise money for prizes and awards. It’s exciting, because I am interacting with many distinguished scientists and Nobel laureates … . I'm constantly in awe.

The membership dues don’t cover everything. Membership dues pay for Physics Today, discounted meeting registration fees, and APS News, but they don’t get you everything. I think we need to make a stronger case for why our members need to contribute over and above their membership dues; they are investing in APS as an invaluable educational and research resource. I think that most of our members know that memberships don’t cover our extensive prizes and awards programs. But, we clearly need to do a better job of showing the benefit of investing in our programs (education and diversity, international, public affairs, and outreach) and be able to show what the value of giving is. This is the crux of the issue — that APS can make a difference to society through its programming, but that programming requires support over and above membership dues. We need to make this clear not just to members, but to other potential donors — foundations, corporations, and other individuals.

What other reasons do you think APS members should donate?

Beyond helping the other areas of APS, donating really goes beyond the services to you as a member ... it’s about helping the physics community and getting our knowledge out there: "What is the value of physics to society?" There are a lot of physicists working in industry and academia who contribute to building incredible machines, like MRIs and CT scanners. They certainly help save lives.

What changes would you like to make as Director of Development?

We took up some advertising space on the APS homepage, and we want use that for things like highlighting any new gifts or awards ... but my hope is that we can get members to think in terms of their legacy and supporting APS into the future, to think of planned giving, and to think of putting the Society into their estate plans. I also think in the past, fundraising has been thought of as transactional. My hope is to move away from that process toward a relationship-building environment, so you are able to cultivate a relationship with people who have the means and capacity to give … but it requires time to understand what motivates their giving, get to know them, and engage them in the programs. The most rewarding aspect of development is when the donor is so engaged in the organization that you don’t even have to ask them for a gift, but rather, a significant gift comes as a result of good relationship-building and long-term engagement.

What got you interested in this type of work?

I learned the craft of fundraising from the former President of the Chemical Heritage Foundation (CHF), Arnold Thackray, and founding chair of the Department of History and Sociology of Science at Penn. He was a consummate fundraiser. I learned from him to do this type of work for pretty complex subject matter while I worked at CHF. I’m not a scientist by training; I have an art history and museum studies background and started my career at the Smithsonian, thinking that I would become a museum director. As an undergraduate I spent time in Florence studying the Renaissance. I’m actually really interested in the intersection of the arts and sciences as reflected in the works of Michelangelo and Leonardo Da Vinci. Why were they such incredible artists and engineers? And then Steve Jobs, he was really into design … he was not a scientist per se, but I think it’s why, in part, the iPhone sold so well. You can probably draw a connection to working with these scientific organizations and professional societies; hence, the APS.

Read, visit museums, travel, and spend time with my family. I have grown kids — our daughter who is a second-semester junior, and a son who is working and getting married in July; and while they both live in New England, we love to spend time with them at holidays or whenever we can.

Have you been to Italy since your undergraduate days?

Not to Italy, but we have traveled to Europe in the past few years; both our kids did gap years between high school and college — through Rotary International. Our son was in Denmark and our daughter in Belgium, and we traveled with them throughout Europe. I’m Romanian actually, although I was schooled in the States. English isn’t my native language; I’m fluent in Romanian and Italian and can converse in French. 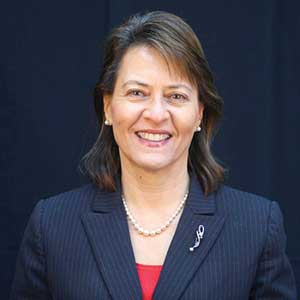