Theoretical Physics is Much More than Equations: Origins of the African School for Electronic Structure Methods and Applications

This story begins in 1987 when I moved to the University of Illinois at Urbana-Champaign, where one of my first students was Nithaya Chetty. He had grown up as "colored" in South Africa under apartheid, where success required the drive and strength that would also be needed years later. He excelled in school and was awarded a Fulbright fellowship that brought him to the University of Illinois. After postdocs in Denmark and at Brookhaven, he returned to South Africa in 1995 (after the end of apartheid) with the ambition to improve science education in South Africa and indeed in all of Africa.

Meanwhile I became involved in a program to provide clean water in Malawi, Africa, one of the poorest countries in the world. Our paths came together again in 1997, when I had the opportunity to travel to South Africa for a physics conference in the area of research that Chetty and I share. I went on to Malawi to help start the program for water wells. From this point on Chetty and I were drawn to work together because of our shared belief in the value of education and the need to provide opportunities for people in the developing countries of Africa — whether access to clean water or access to the world of research in physics. 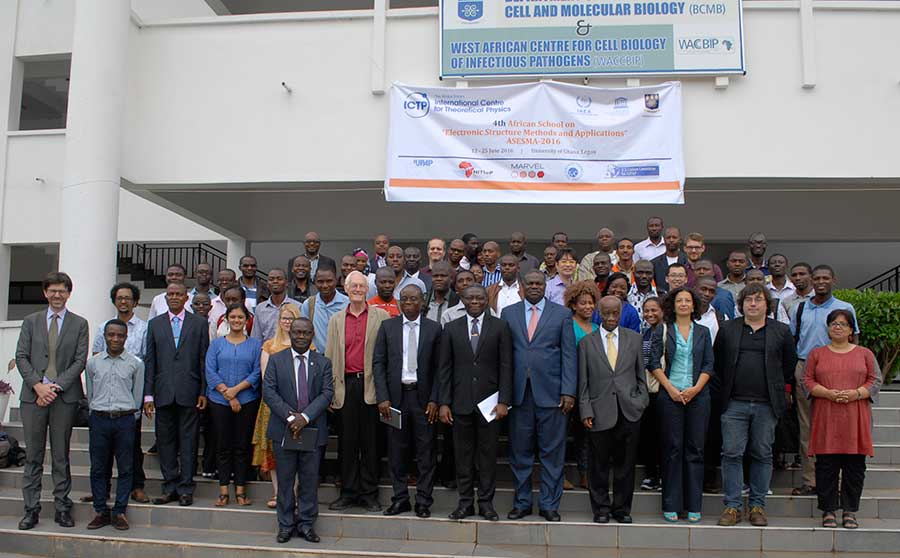 Group Photo for ASESMA 2016 in Accra, Ghana, showing officials of the University of Ghana, participants, mentors and the lecturers who could be present the first day (The author is near the front in the red shirt.)

The African School on Electronic Structure Methods and Applications (ASESMA) grew out of a confluence of events in the years leading up to 2008. South Africa was working to fulfill its opportunity to build up science in sub-Saharan Africa. Chetty had become president of the South African Institute of Physics and the first deputy director of the new National Institute for Theoretical Physics, among other roles. Scientists at the International Centre for Theoretical Physics (ICTP) in Trieste, Italy, notably Sandro Scandolo, were committed to work in developing countries. In addition, they had developed computational codes for density functional calculations along with tutorials and workshop materials. Density functional theory had become one of the most widely-applied methods in physics with increasing impact in chemistry, materials science, and other fields. ASESMA emerged from the conviction that first-rate science could be done with limited resources by African researchers if they had the opportunity to learn and work side-by-side with others in the global endeavor of science!

The initial ASESMA workshop was held in 2008 at the African Institute for Mathematical Sciences in Cape Town, organized by Chetty, Scandolo, and myself, along with Daniel Joubert, a professor at the University of the Witwatersrand in Johannesburg. Students and scientists from many countries attended. After the workshop concluded, it became clear that many of the participants needed further help and interaction. This led to the vision of a series of workshops held every two years to foster collaborations and build up scientific infrastructure.

The foundation for a series of workshops until 2020 was the endorsement by the International Union for Pure and Applied Physics (IUPAP). This a story of how diverse physicists together make a difference. The joint support by IUPAP commissions on physics development, computational physics, physics education, and structure and dynamics of condensed matter came about only because of people like Peter Borcherds (University of Birmingham in England), Jim Gubernatis (Los Alamos National Laboratory) and Kennedy Reed (Lawrence Livermore National Laboratory), along with Chetty and Scandolo. Through the years the workshops have been supported by the ICTP and other agencies, including the South African National Institute for Theoretical Physics and the APS Division of Computational Physics.

Up to now ASESMA workshops have been held in Cape Town in 2010, Eldoret, Kenya in 2012, Johannesburg in 2015, and Accra, Ghana in 2016. (Unfortunately the 2014 school in Abuja, Nigeria was cancelled due to the violence in Nigeria and rescheduled in Johannesburg.) Each school enrolls about 40 participants; approximately half are attending their first workshop, and half are returning participants, who are developing new expertise and also helping the new students. In each case there have been participants from at least 10 different countries, with 13 sub-Saharan countries represented at the 2016 school in Ghana. (See photo.) There are now several groups actively working on electronic structure problems in various parts of Africa, and mini-ASESMA meetings have been held in Khartoum and Brazzaville.

Each ASESMA workshop has involved outstanding scientists from developed countries who gave their time and in many cases provided their own support. One aspect of ASESMA that is particularly notable is the role of "mentors," advanced students and postdocs who work with the participants, providing a much richer and more valuable experience than just listening to lecturers. At first all the mentors were from Europe and the United States, but increasingly they are experienced Africans. More senior leadership is also increasing, most notably George Amolo, who organized ASESMA in Kenya in 2012 and who is now the head of its Executive Committee.

ASESMA has been a rewarding experience for everyone involved. I have been the primary organizer of the program, and it is heartwarming to get the messages from lecturers and mentors saying "Thank you for getting me involved!" (not to speak of the overflowing appreciation by the participants!)

Bringing together people from many African countries has effects I did not anticipate. For example, the organizers of the 2016 school arranged an excursion to the oldest "slave castle," Elmina Castle near Cape Coast, Ghana, where slaves were held until they were loaded onto ships for the Americas, at least those who survived the wretched slave dungeons. It was the first time that most of the African participants from other countries had visited such places, and it was a moving experience to be with them. On a happier note, the spirit of the participants has shown through at each school. In addition to traditional awards at the end of the school, like "best all around" and "most improved," one of the best is "most joyful," which represents a vital aspect of ASESMA!

Further information on ASESMA can be found at their website which is maintained by Sinead Griffin, one of the outstanding mentors. There are also articles in Physics Today, Nature Physics, the newsletter of the APS Forum on International Physics, and other publications. Links to the articles are given at the ASESMA website. 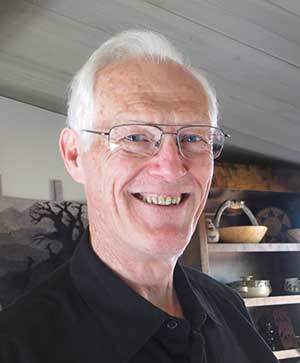