Celebrating a Century of Optics Innovation – Parallels of OSA and APS

Physics and optics have always been intertwined. APS was founded in 1899 and The Optical Society (OSA) in 1916 for similar purposes — to share research and offer opportunities for collaboration, thereby expanding the field of knowledge and raising the visibility of science. It was amid the backdrop of World War I that OSA’s founder and optical physicist Perley G. Nutting, who had recently joined Eastman Kodak from the U.S. Bureau of Standards, was inspired to improve collaboration among industry, government, and academia to address changing market conditions. The United States lacked its own optical glass and optical manufacturing infrastructure, and scientific collaboration was a challenge. Nutting, along with 30 charter members including Adolph Lomb, who served as OSA’s treasurer until his death in 1932, created a professional society to focus on advancing applied optics organized around the themes of photography, vision, optical materials and optical instruments.

Since that time, you could argue that optics has changed everything. Barcodes make shopping a breeze. MRIs detect injury and disease. Cameras capture life on Facebook and Instagram, as well as speeding cars. Telescopes found how big our universe really is and discovered that Pluto is a dwarf planet. Lasers confirmed the presence of gravitational waves, remove wrinkles from our skin, and restore our vision. Sensors adjust the headlights on a car, change the lighting in a room, and provide security. LIDAR systems guide autonomous vehicles. And these are but a few recent examples. For the last century, The Optical Society and its more than 19,275 global members have been at the forefront of these innovations — and often in partnership with APS colleagues, who number more than 50,000 around the world. 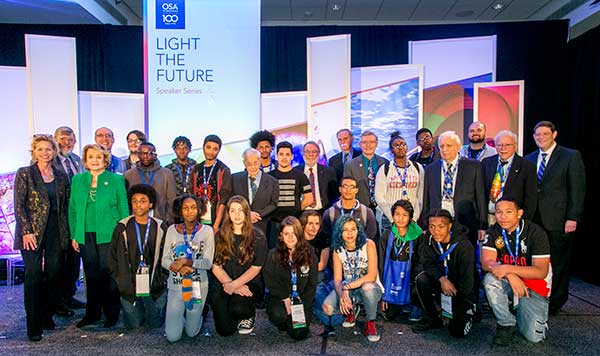 Highlights in the Science of Light and Physics

Optics and physics share many historical firsts and common theoretical foundations. Among the many in color, spectroscopy, and optical fabrication, a few seminal discoveries are worth highlighting. Many more are listed on a timeline celebrating the 100th anniversary of The Optical Society.

Einstein earned the 1921 Nobel Prize in Physics for his work on the photoelectric effect, which described light, for the first time, in terms of photons rather than waves. Einstein’s prediction of the existence of gravitational waves in 1916 was confirmed by LIGO using a quantum noise-limited ring laser (NPRO, invented by R. L. Byer) 100 years later in 2016. Max Planck won the 1918 Nobel Prize in Physics for his discovery that energy flowed in discrete packets that he described as quanta — signaling the shift between classical and quantum physics. Planck’s constant, h, determines the amount of energy carried by a photon, which is a quantum of light.

In 1933, OSA established a colorimetry committee to update an out-of-print report on color. This led to 20 years of persistent work resulting in the landmark publication of The Science of Color in 1953, which realized eight printings, the last in 1999 — the year of APS’ centennial.

A few other OSA firsts: The neon sign was invented by our founder in 1904. Edwin Land, who invented the Polaroid camera, demonstrated the technology in 1947 at an OSA meeting. Xerography, the commercial name given to electrophotography developed by Chester Carlson, was demonstrated at OSA’s annual meeting in 1948.

Shared History of APS and OSA

The Optical Society’s strength in its first half-century was applied optics. The post WWII "Big Science" funding supported the invention of the laser in 1960, and optics came into to its own for basic scientific research and discovery. The laser also impacted the scientific ecosystem, and APS established its Division of Laser Science (DLS) to address this transformational change. The laser spawned new journals such as Applied Optics and meetings like CLEO, as well.

Around the same time, science as a global enterprise was expanding. By 1965, OSA’s membership grew to 4,429 members, including 328 individuals from 38 countries outside of North America — a tenfold increase from pre-WWII levels. Both OSA and APS recognize their unique positions in the global scientific enterprise, and their volunteer leadership reflects the diversity of their membership.

Although U.S.-based societies, they actively foster a global reach in physics and optics through conference programming, journals, and awards. To engage the next generation of leaders, OSA and APS invest in students and early career professionals providing travel grants, awards, mentorship, and other professional development opportunities. The first OSA student chapter was founded in 1982 in Rochester, NY. Today, there are more than 350 student chapters around the world.

Both societies have also committed to advancing gender diversity in the sciences and helping women in STEM through programming and advocacy. APS and OSA are professionally managed by chief executive officers (CEOs) who have a long and successful history with their respective societies. Liz Rogan of OSA and Kate Kirby, the first CEO of APS, are exemplary role models for those interested in STEM fields of study.

The two societies also share a commitment to advocacy. In the United States, their public policy programs educate policy makers about the importance of federal investment in research and development and how innovation supports competitiveness. Both Rogan and Kirby have championed coalitions to advance the understanding of the role of science — be it physics, optics or medicine — with Congress and federal agencies as well as the general public. The Optical Society is a founding sponsor of the National Photonics Initiative (NPI), a collaborative alliance among industry, academia, and government to raise awareness of photonics and the impact of photonics on our everyday lives; increase cooperation and coordination among U.S. industry, government, and academia to advance photonics-driven fields; and drive U.S. funding and investment in areas of photonics critical to maintaining U.S. economic competitiveness and national security. APS is a sponsor of NPI.

APS led the establishment of Science Counts, a non-profit 501(c)(3) organization dedicated to enhancing the public's awareness of, and support for, federally-funded scientific research. OSA is a supporting partner. Both societies also participate in the American Innovation Task Force and the annual Science, Engineering, Technology Congressional Visits Day, as well as sponsor Congressional Fellows who serve as science advisors to members of Congress — ensuring that the voice of scientists are represented in the crafting of science policy.

While an anniversary is time to reflect on the achievements of the past, it is also an opportunity to address the future and potential challenges. For example, there remains a need to take special steps to support the scientific enterprise in less developed countries in the world. The continuing evolution of the publishing enterprise and the push for open access to scientific research also has the potential to impact all non-profit scientific societies. These and the continuing efforts to explain the fundamental benefits of scientific research to our economy, security, and quality of life are central to the mission of both societies.

As a past president of OSA and APS, as well as a member of OSA’s Centennial Advisory Panel, I’m proud to have served the optics and physics communities. The strength of membership is the individuals sharing knowledge and helping deliver science to local constituencies — be that a geographic region or topical research area. The resources provided by science societies help us all deliver cutting edge research and develop new applications. For more than a century, both APS and OSA have been advancing the physical sciences. OSA has been the leading global society for the optics and photonics community and serves to promote the generation, application, and archiving of knowledge in optics and photonics and to disseminate this knowledge worldwide. I’m confident that the next century holds many more paradigm shifting discoveries, and that our science societies will be there to help navigate the path.

Robert L. Byer is Co-Director of the Stanford Photonics Research Center and the William R. Kenan, Jr. Professor of the School of Humanities and Sciences, Department of Applied Physics. He served as the president of OSA in 1994 and APS in 2012. Byer has published more than 500 papers and holds 50 patents in the fields of lasers and nonlinear optics. He is a fellow of OSA, APS, IEEE, AAAS, the IEEE Photonics Society, and is a member of the National Academy of Engineering and the National Academy of Science. 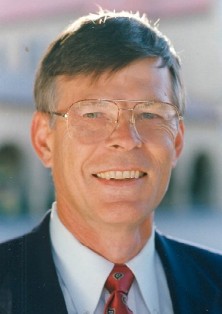