Our monthly wrap-up of papers in the physics literature includes a new AFM technique that measures vector forces in 2D, holograms made with neutrons, and more.

Two independent groups have developed atomic force microscopy (AFM) schemes that can measure vectorial force fields in two dimensions. AFM can image the surface of a sample with atomic resolution by recording the force exerted by a sample on the tip of an oscillating cantilever. Conventional setups, in which the cantilever motion is limited to one dimension, probe only the projection of the force along a specific direction. Mercier de Lépinay et al. and Rossi et al. replaced the cantilever tip with a nanowire, which follows the surface forces like the needle of a record player. Both setups, which are described in Nature Nanotechnology, use optomechanical readout techniques, in which laser light monitors displacements of the nanowire. The two-dimensional force field of the sample surface can then be extracted by measuring the effect of the field on two orthogonal oscillation modes of the wire. Mercier de Lépinay et al. used the setup to map the force field produced by a sharp tip, while Rossi et al. imaged a patterned semiconductor surface. A vectorial AFM will be useful in a wide range of applications, including the characterization of the anisotropy of chemical bonds and the measurement of the directional nature of Casimir forces. 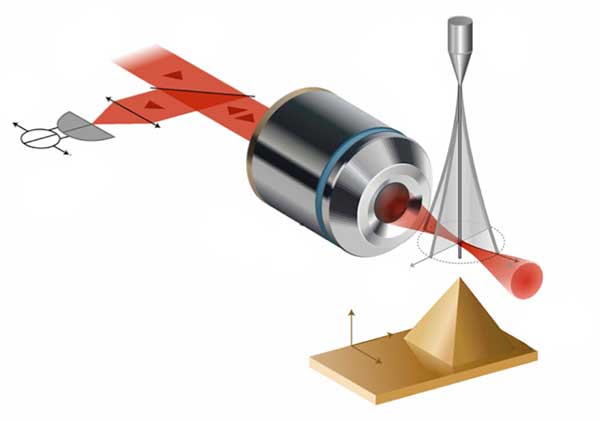 Researchers have successfully mapped the vector force from a surface in two dimensions by using a nanowire as the probe in an atomic force microscope.

New experiments with cold atoms demonstrate magnetic correlations that could help explain high-temperature superconductivity. The observed correlations support a condensed-matter model that assumes electrons in a crystal hop between lattice sites, while also avoiding each other because of repulsive interactions. When the electron density is at a certain level, this so-called Fermi-Hubbard model predicts the material will exhibit antiferromagnetic ordering, in which magnetic moments — or spins — of the electrons align in an alternating (up/down) pattern. Testing this prediction is difficult in solids, but cold atoms offer a way to simulate the basic elements of the Fermi-Hubbard model within a controllable platform. Three separate groups — Parsons et al., Boll et al., and Cheuk et al. — have placed cold atoms in optical lattices and utilized site-resolved imaging to measure the number of atoms, as well as their spin, at each site in the lattice. The results, reported in the journal Science, showed that neighboring atoms typically had opposite spins, as expected for antiferromagnetic ordering. The experiments also showed evidence of longer-range correlations (between more distant neighbors), which could play a role in generating high-temperature superconductivity in antiferromagnetic materials.

Neutrons Spiral into a Hologram

Holography isn’t just for photons anymore. Researchers now report their success in using neutrons to make holograms, which record patterns of interference between two coherent beams. Sarenac et al. describe in Optics Express a neutron holography experiment employing a neutron interferometer that is based on the same principles used in optical holography. Here, a neutron enters the interferometer and is separated into two paths by a beam splitter, generating reference and object beams. The object beam is altered with a spatially varying phase after passing through a test object called a spiral-phase plate (a device that imparts helicity), while the reference beam, as in optical holography, is unaltered. The two beams combine at another beam splitter, and the output beams from this are sent to an imaging detector and an integrating counter. Built up from many single-neutron events, the resulting hologram was then reconstructed into a simulated image to generate different intensity profiles of the phase plate. This unique neutron holography setup may offer a new method for characterizing the coherence of neutron beams.

New theoretical work shows how to arrive at a proper theory of warm inflation from first principles. Warm inflation, which involves warm, rather than cold, cosmic temperatures, is a simpler variant of the widely accepted view of the explosive growth of the early Universe. Bastero-Gil et al. report in Physical Review Letters their derivation of a compelling model of warm inflation by borrowing a trick from Higgs boson theories. The Higgs, which gives other particles their mass, is a Nambu-Goldstone boson — a particle that arises from a broken symmetry. The key particle in inflation is, naturally enough, the inflaton, and when the authors assume it to be a Nambu-Goldstone boson, they conclude that inflatons can exist in a warm thermal bath despite the rapid cooling effects of inflationary expansion. Previous models of warm inflation have required an absurdly high number of coupled fields, but the new theory only requires four additional fields. Moreover, the authors present observational predictions about cosmic microwave background radiation resulting from warm inflation and show that these are in agreement with recent results from the Planck satellite. (For more, see the Synopsis “Little Higgs Gives Warm Inflaton a Hand” in Physics)

Using state-of-the-art computer simulations, researchers have discovered that some light nuclei can exist near a quantum phase transition between a liquid-like collection of neutrons and protons and a clumpier state involving clusters of alpha particles. Everyday phase transitions like boiling water are thermally provoked, but quantum phase transitions are driven by quantum fluctuations even at zero temperature. Such transitions may play an important role in determining how subatomic particles are arranged in a nucleus. In a paper in Physical Review Letters, Elhatisari et al. report their results of using a lattice Monte Carlo method to tackle effective-field-theory calculations of oxygen-16 and other light nuclei. By exploring a wider range of nucleon interactions than previous studies, they found that, indeed, the nuclei are close to a transition between a so-called Fermi-liquid configuration and a state with alpha clustering. The results are encouraging for looking at quantum phase transitions in carbon nuclei, which harbor Hoyle states — excited states of carbon characterized by clusters of alpha particles. Such states are thought to be essential to life, as they directly influence stellar production of carbon in the universe. (For more, see the Viewpoint “Uncovering a Quantum Phase Transition in Nuclei” in Physics.)