The Beginning of Nanotechnology at the 1959 APS Meeting

"It was the best of times, it was the worst of times ..." The classic lines that open A Tale of Two Cities by Charles Dickens, rendered in a minuscule type size, netted Tom Newman $1,000 and a letter from Richard Feynman.

In the last few days of 1959, several hundred physicists gathered for “Winter Meeting in the West” of the American Physical Society. Feynman, then a professor of theoretical physics at Caltech, was among the attendees, and he delivered an after-dinner lecture at the nearby Huntington-Sheraton Hotel entitled “There’s Plenty of Room at the Bottom.”

The banquet speech would prove prescient. Feynman’s lecture is widely accepted as spurring the field of nanotechnology, and the Nobel Prize Committee lauded it as “visionary” when they awarded the 2016 Nobel Prize in Chemistry to researchers who assembled tiny motors made of molecules.

"I want to talk about … the problem of manipulating and controlling things on a small scale," Feynman said early in his lecture. He went on to discuss information storage, suggesting that the 120,000 volumes in the Caltech library might, within 10 years, “be kept on just one library card.” Feynman also talked about miniaturizing computers and creating perfect copies of miniscule devices based on spins. “It is a staggeringly small world that is below,” he emphasized.

Feynman concluded his lecture by presenting two challenges to his audience. The first challenge, associated with a cash prize of $1000, was to miniaturize a page of text by 1/25,000 in linear scale so that it was readable with an electron microscope. The second challenge, also worth $1,000, was to build a functioning electric motor within a 1/64-inch cube. “I do not expect that such prizes will have to wait very long for claimants,” Feynman prophesied. 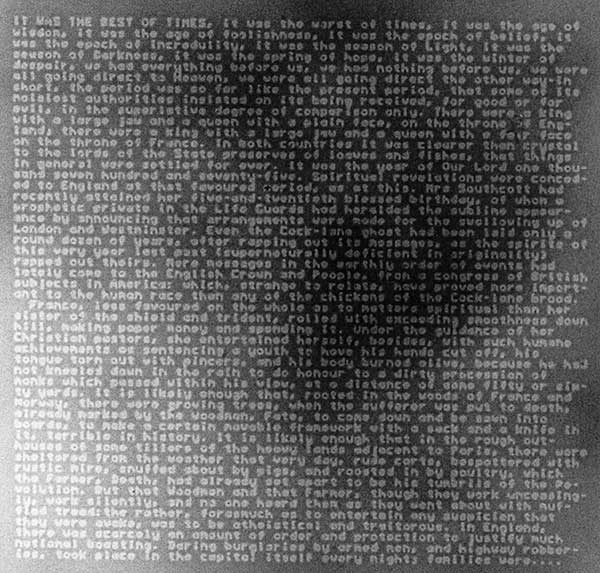 Tom Newman used an electron beam to etch the opening of Dickens' Tale of Two Cities onto a 200 x 200 micron square of plastic and won the Feynman challenge. 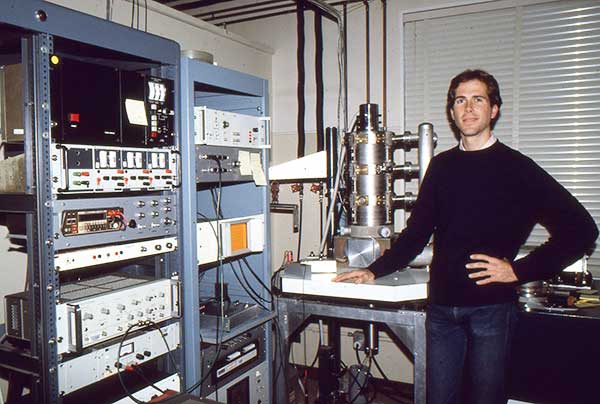 Indeed, one of Feynman’s prizes was claimed within a year by William McLellan. The Caltech graduate presented Feynman with a working motor far smaller than a pinhead. However, Feynman’s other challenge of miniaturizing text remained unsolved for decades. When Engineering & Science, Caltech’s quarterly magazine, covered McLellan’s achievement it humorously noted that “[since offering the prizes] Feynman has been married, bought a house and, what with one thing and other, hasn’t got another spare $1,000.”

In 1985, Tom Newman was a graduate student at Stanford University in the electrical engineering department. His Ph.D. thesis work — which involved making very small lattices to observe quantum effects — was nearly complete. “My advisor encouraged me to finish up and not get too distracted by side projects,” Newman remembered.

At the same time, another student in Newman’s research group read a transcript of “There’s Plenty of Room at the Bottom.” Ken Polasko suggested to Newman that he attempt Feynman’s remaining challenge. “The lab I was working in … had all of the optics necessary for making a high-resolution [printer],” Newman acknowledged. “[And my advisor, R. Fabian Pease] had a real passion for lithography.”

When Pease was away at a conference on the east coast, Newman seized his opportunity to investigate Feynman’s challenge. “I decided to give it a big push for two days while he was gone. During that time, I was able to come up with the basis for how to do it,” Newman said. He made rough calculations of the necessary resolution and the size of the letters required, and he looked over his bookshelf. “I had [A Tale of Two Cities]; it was a nicely bound copy. When I pulled it out, it seemed like a nice text,” Newman said.

Fortunately, Pease was enthusiastic about Newman’s pursuits, and the two men begin to repurpose their lab’s existing equipment. “The pattern generator that we had produced a square dot matrix of 512 x 512 pixels,” Newman explained. He determined how to convert a typed-in string of letters readable by humans into a string of bits readable by the pattern generator. Pease and Newman then used the pattern generator to scan a beam of electrons over a thin layer of poly(methyl methacrylate). When the electrons impacted the poly(methyl methacrylate), they broke bonds within the material’s organic molecules and rendered that area more soluble to a developer solution. “The developer solution eats away the area that’s been exposed,” explained Newman.

Newman and Pease printed the first page of A Tale of Two Cities on a 200 × 200 micron square of poly(methyl methacrylate). The text occupied an area just under six microns on a side, which made it challenging to find on the square. “I learned after the first time [of going to the microscope] to bring a map on a piece of paper,” said Newman. At this scale, the entire Encyclopedia Britannica could be printed on the head of a pin.

On October 12, 1985, Newman and Pease sent a telegram to Feynman at Caltech. The short message read: “Please advise if prize has been collected for reducing a page of text 25 thousand-fold to be readable in an electron microscope.”

“We had decided not to even bother him until we were certain that we could meet the spirit of the challenge,” Newman explained.

Just a few weeks later, Newman was in the lab when a telephone call came through. “Someone said they were transferring a call to me from Professor Feynman. I was a little nervous taking the call,” said Newman.

“The first thing Feynman said was something like ‘Hey Newman, what are you guys doing up there?’,” Newman recounted. Feynman went on to say that the prize had not been claimed and that he was interested in seeing what Newman and Pease had produced.

On November 5, Newman mailed an envelope to Pasadena containing photos of his printing taken using a transmission electron microscope. “I didn’t have high hopes at that point that Feynman would agree that we met [the challenge],” said Newman. “The image is kind of rough, and you’re seeing the resolution limit of this process.”

But Feynman was satisfied and considered his challenge solved, 26 years after it was first proposed. Within a couple of weeks, Newman received a congratulatory letter from the physicist and a check for $1000. “It was a welcome amount of money,” Newman recalled. “I was thinking of getting a Macintosh computer. They had just come out and I was really fascinated by them.”

Newman defended his thesis in December, 1985, and his work would stand as a proof of concept that text could be substantially compressed. “Maybe I didn’t plan it this way, but there is some value in having people recognize this text,” said Newman. “The fact that they knew that first line — or at least the first part of the first line — probably helped a bit in terms of interpreting what I had done.”

Since graduating from Stanford, Newman has worked in the field of lithography. His job responsibilities have spanned engineering, project management, and marketing.

He never kept in touch with Feynman, however. “Maybe I was a bit reticent to contact the great man,” he said.

Katherine Kornei is a freelance science writer based in Portland, Oregon.