Ig Nobels 2016: The Comical Science That Makes You Think

The 26th first annual Ig Nobel Prizes were awarded to a group of scientists that make people laugh, then think. This year's physics prize went to a group of physicists (and one biologist) for their creative work with horses, dragonflies, gravestones, and polarized light.

Dressed in old wedding gowns, lab coats, or more likely their daily work attire, a crowd showed up with ridiculous amounts of paper, and it wasn’t for note-taking. Scores of scientists were anticipating the countdown to launch paper airplanes at various human targets and keen to kick off the 26th First Annual Ig Nobel Prize ceremony in Cambridge, Massachusetts. Each prizewinner was celebrated for producing research that “makes people laugh, then think.”

This year, an astounding 10 Ig Nobel Prize winners traveled to the ceremony at their own expense to shake the hands of a group of genuine, genuinely bemused Nobel Laureates who presented the prizes. Among the distinguished guests was 2005 physics Nobel Laureate Roy Glauber. For almost two decades, Glauber has humbly swept paper airplanes from Harvard’s historic Sander’s Theater stage.

The physics Ig Nobel went to a team of eight physicists (and one biologist) for their work on how polarized light affects random farm animals. Gábor Horváth, Miklós Blahó, György Kriska, Ramón Hegedüs, Balázs Gerics, Róbert Farkas, Susanne Åkesson, Péter Malik, and Hansruedi Wildermuth won for “discovering why white-haired horses are the most horsefly-proof horses, and for discovering why dragonflies are fatally attracted to black tombstones.” 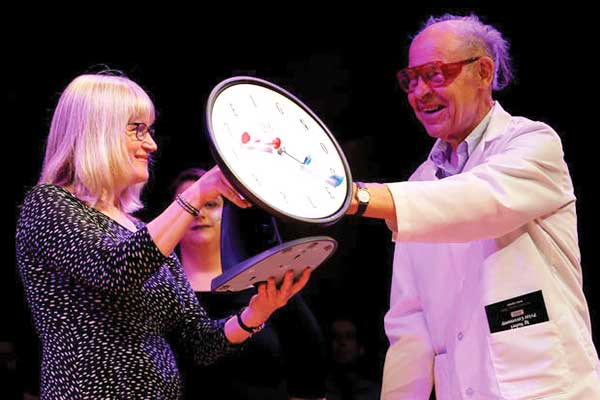 Nobel Laureate Dudley Herschbach presents the 2016 Ig Nobel Prize in Physics to Susanne Akesson of Sweden for work “discovering why white-haired horses are the most horsefly-proof horses, and for discovering why dragonflies are fatally attracted to black tombstones.” 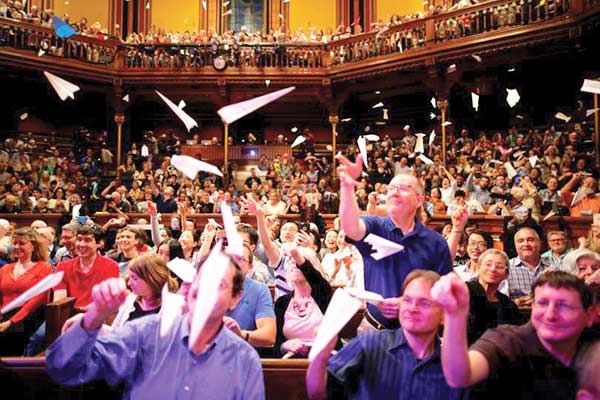 “I feel very honored to represent my team of nine people, and it’s been really exciting because I’m the biologist,” said Åkesson in her 30-second explanation. “The rest are mainly in physics. We found you would rather be a white horse than a black one, if you like to avoid being bitten by horseflies … but in fact you can dress in either stripes like a zebra or, like myself, in a dotted coat … which will also help you”.

Ushered toward stage left by opera singers in grandfather clocks (this year’s theme was “time”), she was left to treasure her new time-keeping trophy: a giant clock with plastic hourglasses for hands, and its numbers replaced with the letters, “I-G-N-O-B-E-L-P-R-I-Z-E”. Each winner was bestowed this same priceless trophy.

The winning team’s bizarre experiments, carried out in the vast farm valleys and graveyards in Hungary, looked at polarized light caused by reflection, whether off of an animal’s fur, or the surfaces of black polished tombstones. They found the darker the surface, the more polarized the light. And little bugs (in particular horseflies and dragonflies) take a keen liking to surfaces that reflect horizontally polarized light, similarly to the way they are attracted to reflective surfaces of water. It was noted that the dark-coated horses were targeted around the neck, backside, and hindquarters in their standing posture, usually due to the sunlight’s angle of incidence. And tombstones that were black in color reflected highly and horizontally polarized light. This is bad news for any dragonflies that decide to lay their eggs on these attractive tombstones — the group saw that the bugs were fatally dragged away from their water-filled habitats, unable to relocate back to their homes.

Also awarded were a psychology prize to Japanese scientists, “for investigating whether things look different when you bend over and view them between your legs,” and a chemistry prize presented to Volkswagen, “for solving the problem of excessive automobile pollution emissions by automatically, electromechanically producing fewer emissions whenever the cars are being tested.” No one showed up to claim that prize.

To learn more about the Ig Nobels and to watch the timely festivities of this year’s ceremony, go to the Ig Nobels 2016 Prize Ceremony & Lectures website.