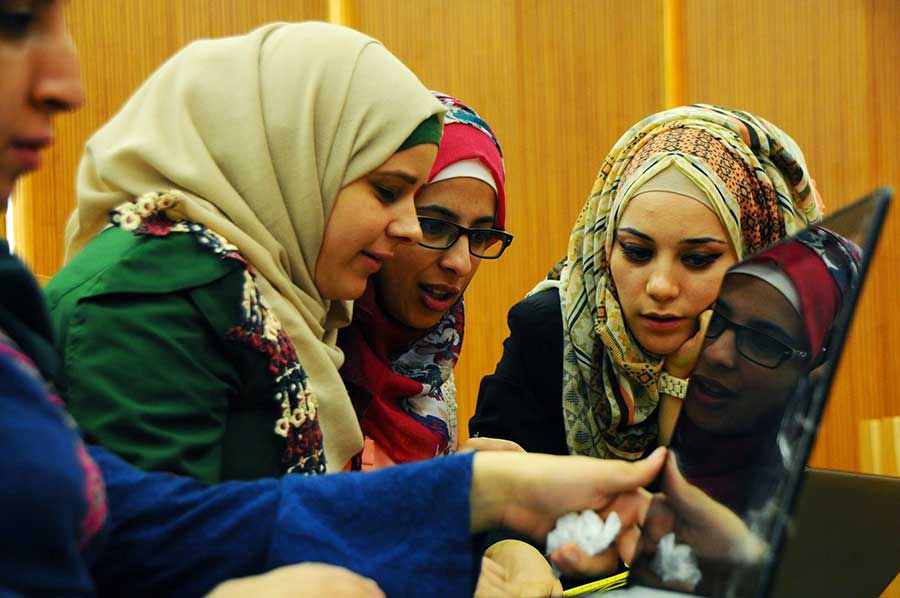 Students attending the Palestine Advanced Physics School at the Arab-American University in Jenin.

The Arab American University in Jenin (AAUJ) recently hosted the fifth Palestinian Conference on Modern Trends in Mathematics and Physics (PCMTMP-V), which is one of the main scientific events in Palestine. Over 200 students from the Palestinian Territories and abroad gathered over three days to discuss advances in theoretical and applied mathematics and physics. The keynote speakers — Jonathan Ellis of King’s College London and Charles Doering of the University of Michigan — gave plenary talks; Ellis spoke on the physics beyond the standard model, and Doering on the 100-year history of the mathematics behind Rayleigh-Bénard convection. Other invited speakers and attendees presented their research to round out the conference.

This year, the PCMTMP-V was accompanied by another notable event at AAUJ — in fact, the first of its kind in the Palestinian Territories. The first Palestinian Advanced Physics School preceded the conference, attracting around 30 graduate students from a number of universities in Palestine for three days of instruction. Created by a newly founded international group, Scientists for Palestine, and co-funded by CERN and the Sharing Knowledge Foundation, the school provided master’s-degree-level students with activities and overview lectures led by internationally recognized experts, shedding light on recent research developments and opportunities within modern physics.

The various lectures covered topics in prominent research, ranging from symmetry breaking to modern particle physics, as well as recent research at the Synchrotron-light for Experimental Science and Applications in the Middle East (SESAME). Presented with a plethora of subjects, the students were exposed to both familiar and new areas of research, promoting possible collaboration in the future. CERN recently signed an agreement with the Palestinian Territories that will let Palestinian researchers join the ATLAS experiment. Those involved hope to get more scientists in the lab by fostering scientific collaboration and better relations in the region, which the school effectively accomplished.

“The school was a great success,” wrote David Marsh of the University of Cambridge, in an email to APS News. He served as one of the international organizers of the school, along with Nabil Iqbal (University of Amsterdam), Mario Martone (University of Cincinnati), Andy O’Bannon (University of Southampton), and Kate Shaw (The Abdus Salam International Centre for Theoretical Physics).

“We organizers and the lecturers were very happy with the outcome of the school, [and] the international reception from fellow scientists [is] overwhelmingly positive. [This] has been a great encouragement to us all to continue our work with supporting the development of science in Palestine,” Marsh noted.

The students in attendance felt likewise — through immersion in problem-solving sessions and applied particle physics tutorials, the school offered them opportunities that would normally not be part of their regular university curricula. The Facebook page of Scientists for Palestine featured brief statements of select students to raise awareness of the successful and inaugural event.

"Being at the first Palestinian Advanced Physics School was a wonderful experience,” comments Waad Awad, a student working on her master’s degree in physics at Birzeit University and attendee of the school. “We feel lucky to have a chance to improve our physics knowledge … [meet] scientists from all over the world … and now we know about [potential opportunities and] training at SESAME or CERN!”

Falastine Abu Saif, also an attendee of the school, and a physics master’s degree student at An-Najah National University, emphasizes her take on the school’s impact: “It is great to hear lectures directly from world experts and connect with them, and it’s the most helpful way to get involved. … [Palestine has] plenty of potential, and very smart people. We just need more support and encouragement,” she said in her interview.

While the students and organizers alike benefited from both excursions, some students were unable to participate due to travel restrictions imposed by the Israeli occupation of Palestine. Students from Gaza were not granted permission to travel to the meetings, which prevented one student from attending the school, and also prevented two scientists from giving their talks at PCMTMP-V. All three individuals are from the Islamic University of Gaza and requested they not be identified.

“Access to higher education is a human right, and it is deeply regrettable that this right is not respected by the ongoing Israeli occupation,” stated Marsh in an email. A statement by Scientists for Palestine, released at the end of July 2016, asserted the organization’s position is to ensure equality of human rights despite the restrictions. 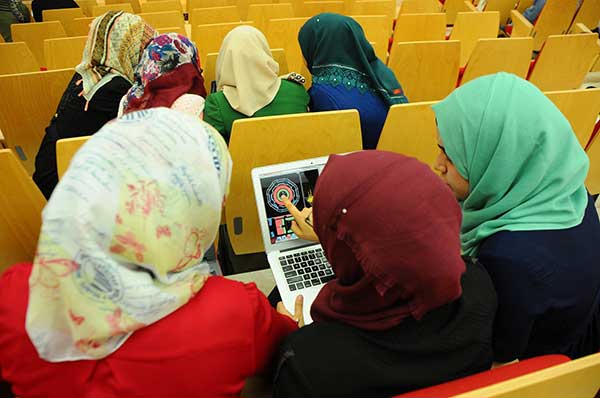 A number of female physics students traveled to AAUJ to attend the advanced physics school.

“Despite the hardships caused by the occupation, science in Palestine continues to grow and strengthen its international connections. Scientists for Palestine will be proud to continue to support this development,” the statement said. To overcome the imposed travel restrictions, Scientists for Palestine broadcast the school’s program to the Islamic University in Gaza.

When contacted, the Israeli government refused to comment on the matter.