Lindau: The Day I Got the Nobel Prize

So I was minding my business at a conference in Bavaria this summer when something rather bizarre occurred. I got the Nobel Prize in Physics.

Allow me to explain. For the last three score and six years, the tiny hamlet of Lindau, Germany has played host to the world’s most dense aggregation of brainpower. The Lindau Nobel Laureates Meetings take place here annually, in which multitudes of Nobel Laureates and hundreds of hungry young scientists from over 80 countries in a particular field flood onto this island town to do what they do best: talk about science with scientists.

I first attended this conference four years ago, the last time it focused on physics. That was a mind-blowing adventure, because never had I been around so many Laureates in one place. But being that it was summer of 2012, there was also another pinch-me moment that took place that year: the Higgs Boson was announced.

So having had a taste of Lindau, I knew what to expect this year: brilliance, brilliance, creativity, and brilliance. There are formal lectures given by the laureates in the morning, and then master classes and semi-private meetings that take place between the Laureates and the students in the afternoons. As a journalist, I can only attend the “public” events, so as much as I would have liked to send a drone in to check out what atomic physicist and former U.S. Secretary of Energy Steven Chu was saying to the kids, I maintained decorum and relied on the occasional Snapchat from carefully sourced insiders.

At this year’s meeting, I spent the week interviewing various laureates, including Brian Schmidt, Dan Shechtman, and Bill Phillips, all gracious and enthusiastic. I attended lectures by Roy Glauber, who walked us down memory lane of the days with Feynman and Oppenheimer, and went to press conferences concerning migration in science, women in science, and artificial intelligence. I ate dinner with the delegation of students from the States, which was one of the largest contingents there. I sat in on panel discussions relating to particle physics and education. I learned about leadership from a physicist’s perspective during a breakfast sponsored by McKinsey & Co. and featuring Schmidt, who this year was named vice-chancellor (essentially the president) of Australian National University.

Lindau is filled with what I can only describe as odd experiences, or essentially “classic” Lindau moments. A moment like when Phillips, who loves when students ask him questions about physics, was mobbed behind a piano at the evening poster session. As I watched I noticed that the more animated and happy Phillips became, the more the students’ confidence blossomed and the more they engaged him. This also led to more pupils being drawn into the vortex, unable to escape the excitement of the experience of talking with a Nobel laureate next to a musical instrument.

Another classic Lindau moment occurred on the first evening I was chatting with a physics Nobel Laureate (in this case, who shall remain nameless) who shared that he sadly would have to leave the conference early due to another engagement taking place in the celebrity world of physics. Specifically, Stephen Hawking was having his 75th birthday party on an exotic island on Earth that week and the laureate was on his way to the celebration.

And then there was the special moment when I sat down with Klaus Von Klitzing. I interviewed him on June 27, which was also coincidentally his birthday. So I wished the physicist a happy birthday. Now, Von Klitzing is an interesting chap for many reasons. As he revealed to me in the conversation, he is the only Nobel Laureate who has ever applied to attend Lindau as a youngster and was turned down. “As a young student, I applied and I wasn’t accepted,” he recounts with a chuckle. “So I decided to get the Nobel Prize, because then you are invited every year.”

I asked Von Klitzing what his advice was for getting a Nobel Prize. It turns out that he had a few tricks up his sleeve. One was that he had already worked into his speech some tips for actually landing the coveted prize.

But then something magical happened. And this is what I mean by a classic Lindau moment. Because this has never happened to me before, and in particular, it has never happened to me at a science conference. Von Klitzing just casually reached into his jacket pocket and handed me his Nobel medal. I suddenly realized I was looking down in my own hands and holding a Nobel Prize in Physics. It was shiny. It was heavy. Parts of it were faded and worn. I asked why that was and Von Klitzing explained that he takes the medal with him to every Lindau and is happy to share it with the young kids that attend. Many are very eager to hold it themselves and to take snaps with him and it.

I realized that in my life this moment will probably never happen again. Yes, I might run into Von Klitzing in some airport en route to Lindau again, fingers crossed, and he could hand it to me to hold while he checks his boarding pass, but there is no certainty. The Nobel Prize will always be both in my possession and not. So I had to act quickly to measure, quantify, and secure this moment in time and space with a photograph. And because Von Klitzing is such a classy guy, he was more than happy to take a picture with me and it, the Nobel Prize in Physics that I had just received.

So you see, fairy tales do come true at Lindau. You can meet and greet and learn from Nobel Laureates left and right. You can discuss your true love, science, with others from around the world who are just as passionate about it. You can gain insight and advice to take your scientific endeavors into novel and innovative directions. And sometimes, when the stars and Laureates align, you can also get the Nobel Prize.

The author expresses appreciation to the organizers of the Lindau Nobel Laureates Meetings for a partial travel fellowship to attend. 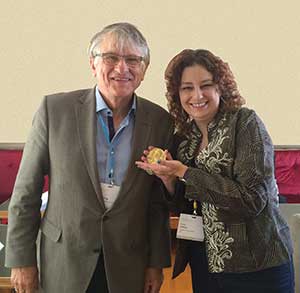