In this series of articles, APS News sits down with APS employees to learn about their jobs, their goals, and the things that make them tick. This month we chat with Matthew Salter. He discusses his role as APS publisher and future goals for the journals and their development. The interview has been edited for length.

This is the first time that APS has had a professional publisher. What are your duties in this role?

The role is really quite wide-ranging, and I actually have various responsibilities that might not be immediately obvious. A major responsibility is to ensure the financial health and sustainability of the APS journals, and so I manage the team that looks after our subscribers. I also oversee the journal marketing for APS to make sure we are correctly presented to the community.

Are there multiple publishers under APS, or are you the main “go-to” publisher?

APS is slightly unusual in having only one publisher for the whole portfolio, but my role is at a higher level where I direct and manage all publishing aspects of the publications. I work closely with APS Editor in Chief Pierre Meystre, who oversees all the content in the journals. Ours is a key relationship, and I couldn’t be happier to have him on board!

Because you are focused on attracting papers, do you get to choose the content of what APS publishes?

No, the publisher does not decide which papers should be published. Actually, I’m not a physicist, so even if I could I feel I wouldn’t be the best fit to make those decisions.

I’m a chemist by training; I got my Ph.D. in organic chemistry at Imperial College London. Of course I’ve been interested in physics, and I considered it in university, but I’ve been seduced by chemical structures since an early age.

How did you find yourself in scholarly publishing?

After obtaining my Ph.D., I carried out postdoctoral research at Tohoku University in Sendai, Japan, and Imperial College before becoming a lecturer in chemistry at King’s College London. The department was closed in 2005, and I returned to Japan as a group leader at the University of Tokyo, and then I moved into a commercial role as a chemical sales director based in Oxford. However, I have always been interested in science writing and communication, so when I was offered a position with a new unit of Nature Publishing Group based in Tokyo, it was a natural fit. I’ve been involved with Nature for a number of years, and also a stint with IOP Publishing in similar directorial roles.

What brought you to work at APS?

I was approached to take the position whilst working for IOP Publishing, starting at APS this past February. Because of its position as one of the largest physical societies in the world and its outstanding portfolio of journals, the nature of the role was too good to miss as a career challenge. I never thought I would have this wonderful opportunity to work and live in the U.S.

Are you involved with other parts of APS?

I serve as the APS representative on the CHORUS Board of Directors (Clearinghouse for the Open Research of the U.S.), which is basically an organization that aims to sustainably deliver public access to published articles. I am also on the board of STM, an association for academic and professional publishers, and partake in other lobbying and industry groups such as the Open Access Scholarly Publishers Association (OASPA).

Considering your experience in Japan, are you fluent in Japanese?

Well, there’s always room for improvement, but I am very comfortable in Japan. I speak Japanese at home all the time, as my wife is Japanese. One of the great things about studying languages is there is always something more to learn so it keeps you humble! I also speak Mandarin to a reasonable standard.

What are the best parts of the U.S. you’ve seen so far?

I’ve been to New York City a couple of times and I [was] wowed by the Flatiron and the Empire State Building. It’s an absolutely amazing place. I’ve seen more of the U.S. in the last six months than I could’ve imagined. I also had great sushi in Salt Lake City, which was a wonderful surprise; I’ve also seen the Ford River Rouge Plant in Detroit.

What do you do outside of work?

I’m married with two kids, so I don’t have much time for hobbies. I actually would love to get back into karate — I got up to purple belt in Shorinryu karate when I was in Japan, but that style isn’t widely taught in the US, so I’m afraid I’ll have to start that up again from scratch in a different style. My wife’s father was a karate master and both my sons do it as well. Most people begin learning when they are kids, but I started at the ripe old age of 45. It’s never too late.

Around the office, you’re well-known for your Twitter activity … care to explain?

I’ve actually got two Twitter accounts, wait no… I think I have three — one of them is purely for pictures. They are all personal accounts so don’t reflect the APS official position on anything! I tweet about a wide range of things, mainly politics and publishing. I’m always on Twitter during the long bus commute to work. Maybe I tweet a bit too much, but I think I’m getting better at it.

I’m looking at your Twitter bio (biography), and it says you are an “award-winning pancake chef.” Do you like to cook, too?

I’ve won the “Best Pancakes Made in Our House” award five years running — my kids always nominate me. 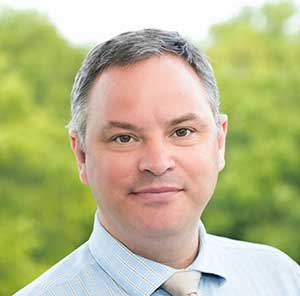