Katharine Blodgett Gebbie passed away on Wednesday, August 17, at the age of 84. For over 20 years, she directed the National Institute of Standards and Technology’s (NIST) Physical Laboratory (PL) and its successor, the Physical Measurement Laboratory (PML). From 1997 to 2012, her laboratory earned four Nobel Prizes in physics — an extraordinary accomplishment over the span of just 15 years.

“The wall of her office was filled with the posters that recognized the awards her people had received, and she gloried in their accomplishments,” William Phillips, a fellow of NIST’s Joint Quantum Institute, wrote in an email. “Each of those Nobel Laureates credited Katharine with building the institutional environment in which the work of their groups could flourish.”

Known for her exceptional kindness and wisdom, Gebbie’s colleagues renamed NIST’s precision measurement laboratory in Boulder, Colorado, in her honor. “This renaming is our small way of saying thank you … for all [Katharine] has done for this organization over such a long period of time,” said NIST Director Willie E. May in a tribute article covering the event in 2015.

An astrophysicist by training, Gebbie received her B.A. in Physics from Bryn Mawr College, subsequently earning a B.S. in Astronomy and Ph.D. in physics from University College London.

She initially joined NIST in 1968 as a physicist in the Quantum Physics Division (QPD) of JILA, a cooperative enterprise between NIST and the University of Colorado, Boulder. Much of her research focused on the physics of planetary and stellar atmospheres. Moving up the ranks, she worked alongside NIST Director Ernest Ambler as a program analyst, and was the first person from the JILA lab to work in the National Measurements Laboratory in 1983. She was then appointed chief of the QPD at JILA in 1985, also becoming acting Director of the new Center for Atomic, Molecular, and Optical Physics in Gaithersburg, MD, in 1989. She eventually accepted the director position at NIST PL in 1990; in 2011 when PML was founded, she took on the role of director of the laboratory’s research.

Reporting to six different NIST directors during her 45 years there, Gebbie pioneered the expansion and success of her laboratories, devoting her career to the advancement of her colleagues, researchers, and support staff.

This leadership earned her numerous awards. She received the highest honor of the United States Department of Commerce (DoC), earning the DoC Gold Medal for her leadership and professional excellence at NIST. She also received additional awards, including the Service to America Career Achievement Award, and Women in Science and Engineering Lifetime Achievement Award.

Gebbie also played a crucial role in the creation of undergraduate opportunities, such as NIST’s Summer Undergraduate Research Fellowship (SURF) program and was an advocate for women and minorities in science.

“The creative environment and spirit of discovery that she nurtured continues to enrich us today,” wrote Phillips. “Her passing has left me, and many more, heartbroken and unable to imagine NIST and our own lives without her.”

A detailed profile of Katharine Blodgett Gebbie can be found on NIST’s PML page. 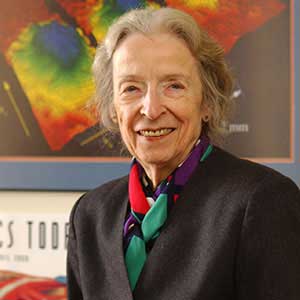