India has a rich tradition of physics, with such luminaries like J. C. Bose, S. K. Mitra, C. V. Raman, and S. N. Bose, to name a few. Now, under Prime Minister Narendra Modi, India is seeing a renewed investment in science and technology, particularly in big science projects. For instance, the budget for India’s largest granting council for science, the Department of Science and Technology (DST), was increased by 17 percent from last year to $660 million. This is coupled with the launch of some boutique programs like Make-in-India and Start-up India, which could boost further investments in particle physics, making sub-components for the Large Hardon Collider, among other opportunities. India’s physics community is excited about all these new developments, and the global physics community should pay more attention to these new trends in investment in basic science in India.

There are several notable examples of large U.S.-India collaborations. Given the recent breakthrough observation of gravitational waves by the Laser Interferometer Gravitational-Wave Observatory (LIGO) collaboration, it is great to see that the LIGO-India project has recently received an in-principle approval from the Indian government. LIGO-India is a planned advanced gravitational-wave observatory to be located in India as part of the worldwide network.

The proposed LIGO-India project will be a collaboration between a consortium of Indian research institutions (Institute of Plasma Research Gandhinagar, Inter University Centre for Astronomy and Astrophysics, Pune and Raja Ramanna Centre for Advanced Technology, Indore), and the LIGO Laboratory in the U.S., along with its international partners in Australia, Germany and the U.K. LIGO in the U.S. will provide the LIGO interferometer hardware, along with training, support, and assistance with installation.

LIGO-India will provide research opportunities to hundreds of Indian students and scientists, and will definitely boost scientific ties between the American and Indian physicists. It will provide fertile ground for Indian scientists and engineers to work on a global-scale problem. It will also help local industries, particularly those engaged in ultra-high vacuum, to participate in this collaborative project with Indian and international scientists. This flagship project will further promote international collaboration, particularly with the U.S.; its bilateral relationship with India has been at an all-time high, as shown by the joint declaration of President Obama and Prime Minister Modi.

Another actively developing collaboration is taking place in the field of high energy physics. In 2014, the U.S. particle physics community came out with a decadal plan that calls for establishment of a world-leading neutrino physics research program in the U.S., which will be truly international from the very beginning and employ Fermilab’s accelerator facilities. Fermilab and Indian institutions have been collaborating on high energy physics experiments since 1985.

Indian scientists have made significant contributions to the Fermilab program. Several students have received their Ph.D. degrees under the Indian Institutions - Fermilab collaboration, so it is natural that India is already taking a very active role in this development.

Culmination of the collaborative effort was an overarching goal of the Memorandum of Understanding between the U.S. and Indian Universities & the Accelerator Laboratories, signed on January 9, 2006 to extend the collaboration on accelerator development in both countries. The collaboration enables scientists in the U.S. and India to jointly develop and optimize the technologies for future high-power superconducting radio frequency accelerators, such as the Proton Improvement Plan-II accelerator for neutrino production at Fermilab and, as part of the India’s 12th national plan, two accelerators in India for materials science, energy, and medical applications.

As mentioned by PricewaterhouseCoopers’ 2015 Global Innovation 1000 report, there has been a 115 percent increase in India's R&D spending from 2007 to 2015, to $28 billion, which is coupled to a 116 percent increase in imports (primarily from the U.S.). This will provide a significant boost to India’s innovation ecosystem. The increased funding from DST would be targeted towards building research centers and business incubators across academic campuses in India, and will facilitate the creation of campus-led start-up/spin-off activities. Also, additional funding will help India to take on more “risky” projects and allow Indian scientists to take part in “big science” initiatives. With India still being a low-cost country (the average engineering wage is less than $35,000 per year), this also brings a significant competitive advantage in developing technologies and hardware for various world-wide “big science” projects.

Also, APS is engaged with the Indian physics community through the Indo-U.S. Science and Technology Forum through a partnership to offer student, postdoc, and faculty exchanges. A call for proposals for these programs is issued each fall and more information is available at the U.S.-India Travel Grant Program page. Now is an excellent time for U.S. physicists at all levels, from graduate students to senior professors, to capitalize on this growing momentum and engage in more long-term sustainable collaboration between the two countries.

S. K. Mitra is founder of the Micro and Nanoscale Transport Laboratory and Associate Vice President for research at York University in Toronto, Canada. V. Shiltsev is Director of the Accelerator Physics Center at Fermilab. Both are members of the APS Committee on International Scientific Affairs. 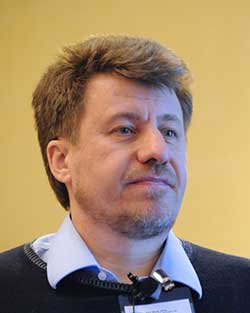 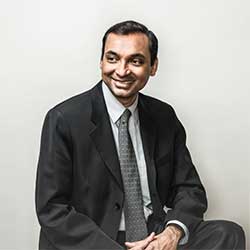