Serving the Next Generation of Physicists at APS Meetings 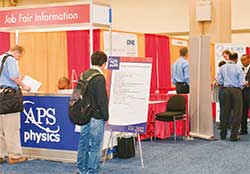 According to the AIP Statistical Research Center, less than a quarter of physics Ph.D. graduates will end up in permanent faculty jobs [1]. And even though many well intentioned mentors would like to prepare their students for eventual careers outside of academia, many do not have networks or experience to do so, especially for careers in the private sector.

In bringing together so many physicists across all subfields and sectors, APS meetings present a great opportunity to bridge that gap. Students often have questions about private-sector careers, such as how the culture differs from that in academia, what kinds of problems physicists are working on, and what extra preparation they might need to do well. APS provides an opportunity for students to get answers to these questions through informal Q&A panels with industry physicists at our annual and division meetings.

For example, the APS March Meeting 2016 included a special panel focused on careers in industry, “Meet Your Future: An Interactive Session on Industrial Careers for Physicists,” at which several physicists from industry answered questions. At this session Barbara Jones, current chair of the APS Forum on Industrial and Applied Physics and a condensed matter theorist with IBM, described what working in industry is like, and what research is at the forefront of product development in her field.

Every year, upwards of 200 students attend the “Meet Your Future” panels, and speakers will often remain long after the session has ended to network with students individually.

The APS April Meeting 2016 featured a similar panel, but with physicists with backgrounds at national labs and in policy; this panel also was well attended and received positive feedback. And a new industry panel debuted at the 2016 APS Division of Atomic and Molecular Physics Meeting in Providence, R.I., in May.

Gatherings such as these are often the only opportunities that students have to interact with physicists who are not among their own — or their advisor’s — immediate pool of academic colleagues. Therefore, APS plans to continue holding these types of events at the annual meetings, as well as working with division leadership to offer them at a growing number of division meetings in the coming years.

APS also serves its early career members by providing straightforward, nuts-and-bolts guidance on how to successfully plan and move forward along a career trajectory. Every year at the APS March Meeting, author and science coach Peter Fiske (author of Putting Your Science to Work!, a widely read career development book for early career scientists and engineers) gives a comprehensive workshop on making the transition into the workforce, from the point of view of a graduate-level scientist.

This year, Fiske’s presentation focused on important topics like career planning and self-assessment, effective networking, writing a good resume, and negotiating your best offer — but it also included a strong message that early-career physicists are highly motivated, smart individuals who can have a powerful role in shaping the world for the better. Every year, this event receives extremely positive feedback, and many participants state that this empowering message is one of its most useful aspects.

The annual and division meetings are also opportunities for job seekers to connect with employers who are actively recruiting for positions. Every year, a job fair is held at the APS Division of Plasma Physics (DPP) Meeting and the APS March Meeting, in which participating employers can post and interview for jobs directly on site. Though historically the majority of participants have been from academic institutions and national labs, in recent years there has been an uptick in the percentage of private sector employers (at the DPP Job Fair in 2015, nearly 40% of the jobs posted were from companies). In addition to its job fair, DPP has also recently begun offering a popular “Resume Help Desk” for attendees to get feedback to help improve their CVs. The Help Desk staff has included volunteers with hiring experience in academic, national lab, and private sector environments.

Career and professional development events at APS meetings are an invaluable resource for students who may otherwise have difficulty learning about paths outside of what is (incorrectly) considered to be the “traditional” academic route. As one attendee of the March Industry Career Panel stated, “The talks presented were vital in assuring me that I didn’t make a major mistake in my life decision to follow my love of physics … that I will be able to provide for my family and myself without much worry of being able to get a job, being poor all the time, and having to work with people who aren’t science minded.” APS is glad to be able to provide this broader perspective to early-career members and boost the career confidence of the next generation of physicists.

To learn about career events taking place at APS division and section meetings, look for the “Career” track in the APS Meeting app, or under the “Career Events” page of the main meeting webpage. Or you can send email to bailey@aps.org.