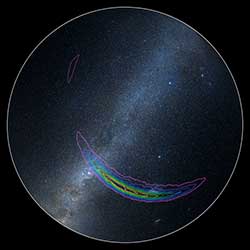 Contour lines show likelihood of where in the sky the black-hole merger GW159014 took place.

APS April Meeting 2016 — Members of the Laser Interferometer Gravitational-Wave Observatory (LIGO) Scientific Collaboration took a victory lap of sorts at the APS April Meeting 2016 in Salt Lake City, Utah. Talk after talk began with slides showing the now-famous signal from GW150914, the formal name for the September 14, 2015 detection of gravitational waves from two black holes that merged 1.3 billion years ago.

“For the first time when I present this talk, I can start with a discovery, not just upper limits,” said Alessandra Corsi, an astrophysicist at Texas Tech University.

But speakers quickly pivoted to new astrophysics emerging from GW150914 and LVT151012, a second candidate event that appeared in LIGO data but did not reach the critical “5-sigma” statistical threshold needed to claim a true detection. Researchers also shared new ideas for peering deeper into the universe and increasing the frequency spectrum that gravitational-wave detectors can probe.

For astrophysics, GW150914 heralded a series of firsts — not just the first detection of a gravitational wave, but also the the first proof that black holes form merging pairs (only inspiraling neutron stars had been previously seen), and the first evidence of black holes more than 25 times the mass of the sun. The large sizes of the merging black holes also revealed that their source stars were low in heavy elements, and that their spins were substantially lower than the maximum possible value allowed under general relativity.

The finding has also allowed scientists for the first time to test aspects of general relativity in the “strong-field regime” — the highly warped regions of spacetime near extremely dense objects. Astrophysicists have used GW150914 to place more stringent limits on a number of general relativity’s parameters, including the speed of gravitational waves and parameters related to the waves’ phase evolution, but so far Einstein’s theory continues to pass every test. “Don’t believe the New York Times — we did not prove that general relativity is correct,” said MIT physicist Salvatore Vitale. “We just found it’s consistent with our data.”

Though it resolved some mysteries, the gravitational wave detection also opened up new ones. “The question that’s on everyone’s mind” now that one black hole pair has been found is how many are out there, said Chad Hanna, an astrophysicist at Pennsylvania State University. Based on one detection and one candidate event, LIGO scientists have shrunk the theoretically predicted range of between 0.1 and 1,000 black hole mergers per cubic gigaparsec of space per year (one gigaparsec equals 3.26 billion light-years) to a somewhat narrower 2 to 400. While that’s still a lot of wiggle room, Hanna said “0.1 is really off the table.”

And more detections may soon constrain the rate further. LIGO’s first observing run lasted from September, 2015 to mid-January, 2016 (project leaders decided after the September 14 find to extend the original end date by about a month), but so far the collaboration has published results only from data taken through early October. Collaboration members were tightlipped about whether additional detections popped up in the more recently acquired data, promising an update within a month or two.

Those new results could also help resolve another mystery. Using the time delay between when the gravitational wave arrived at the twin Hanford, Washington and Livingston, Louisiana detectors, LIGO scientists narrowed the location of the black hole pair to a banana-shaped region that represents around 1.5% of the sky, equivalent to the angular size of around 2,500 full moons. Scientists with NASA’s Fermi Gamma-ray Space Telescope then found in their data a candidate event from a region of sky that overlaps part of LIGO’s region, occurring only 0.4 seconds after the LIGO signal began. Though the gamma-ray signal has a 2 in 1,000 chance of being spurious — making it far less than a 5-sigma event — Fermi scientists published it in February on the arXiv.

The possible coincidence of a gamma ray signal with GW150914 is intriguing, because leading theories do not predict that black hole mergers would produce electromagnetic radiation. Within days of the Fermi team’s announcement, theorists had posted a pile of papers on the arXiv proposing explanations for the gamma rays.

But scientists are remaining cautious, because of the imprecise sky localizations of the two events, and because data from the European Space Agency’s (ESA’s) Integral satellite, which also looks for gamma rays, showed no hints of a detection. Right now scientists have “a big blob from LIGO, and a big blob from Fermi,” Texas Tech’s Corsi said. “I’m personally going to get convinced when I see more [gravitational wave and gamma-ray] associations.”

Fermi team members are also remaining circumspect until LIGO releases more results. “We would not have reported this event just by itself, unless there was a gravitational-wave detection,” explained Adam Goldstein of the Marshall Space Flight Center in Huntsville, Alabama. But, he added, the data are public, and “the most appropriate people to do this particular, difficult, detailed analysis is the instrument team, so there was particular pressure on us.”

Even before they finish analyzing their latest round of data, gravitational-wave scientists are looking toward the future. LIGO is in the midst of a long-planned series of upgrades known collectively as Advanced LIGO; improvements include increasing the laser power in the detector arms, “squeezing” the laser light to reduce quantum uncertainty, and developing new mirror coatings to reduce thermal noise. The detectors will eventually capture gravitational waves from more than 25 times as much space as they did in the first observing run, which was already a more than 25-fold increase over their original sensitivity. By 2018, collaboration members expect dozens of detections per year.

And more detectors will soon join the network. The Virgo facility in Cascina, Italy is slated to come online late this year, though problems with the glass fibers that hold the detector’s mirrors have caused delays. An underground, cryogenically cooled detector in Japan called KAGRA will become the world’s most sensitive starting around 2018. And on March 31, officials from the U.S. National Science Foundation and India’s Department of Atomic Energy and Department of Science and Technology signed a memorandum of understanding to build a LIGO clone in India. The synchronous operation of detectors around the world will greatly improve how precisely scientists can resolve the origins of gravitational waves.

Meanwhile, mindful of the time required to get a facility funded and built, researchers are already planning a “third generation” of detectors that could potentially scan almost the entire visible universe. The European Commission is studying the possibility of an experiment with 10-kilometer arms, proposed under the name “Einstein Telescope.” Syracuse University’s Stefan Ballmer noted that new facilities could deliver more bang for the buck by including two detectors with different orientations at one site, which would help scientists resolve gravitational waves’ polarizations — something LIGO alone was not able to do for GW150914.

U.S. researchers also need to be thinking beyond LIGO, said Caltech astrophysicist Sheila Dwyer. She is part of a team preparing a proposal for a future facility, provisionally called “Cosmic Explorer,” which would have 40-kilometer arms. “We have a clear path for the next five to seven years with Advanced LIGO. But people were figuring that out 10, 15 years ago,” she said. “You have to think pretty far ahead.”

Amid the celebrations, astrophysicist Neil Cornish of Montana State University reminded his colleagues that there are some things LIGO and its earthbound partners will never do. Specifically, ground-based detectors cannot sense gravitational waves of frequencies below a few hertz, because they become swamped by seismic disturbances and the gravitational influence of objects moving on Earth.

To escape this noisy environment, scientists have for 20 years developed plans for the Laser Interferometer Space Antenna (LISA), which would orbit the sun behind Earth, and send laser beams among three spacecrafts at a distance of a million kilometers or more from each other. Such a detector could potentially capture thousands of signals per year from orbiting black hole and neutron star pairs, well before the final moments when ground-based detectors pick them up. “They’re really complementary,” Cornish said. “GW150914 would have been seen 5 to 10 years before in the LISA detector.”

The ESA-led project has had more than its share of hiccups, however, with NASA initially committing and then in 2011 withdrawing as a partner. Currently a modified experiment called “evolved LISA,” or eLISA, is slated to fly in the mid-2030s, though Cornish thinks the LIGO detection could inspire NASA to get back in the game — or push China, which has expressed interest in a mission, to partner with ESA or launch its own satellites. Either could shorten the wait for a functioning space-based observatory.

ESA’s LISA Pathfinder mission, which launched late last year and has already demonstrated that mirrors inside the spacecraft can be kept stable enough, could also provide a rationale for moving faster, says Cornish.

Scientists are also pursuing a third gravitational wave search method that utilizes radio telescopes to search for small changes in the timing of rapidly rotating “millisecond pulsars” in our galaxy. Such changes are predicted to be produced by very low-frequency gravitational waves emitted from supermassive black hole pairs that result from mergers of distant galaxies. Project leaders predict a detection by early next decade.

One point of complete agreement among meeting attendees is that it’s a great time to be a gravitational-wave physicist. “I’m excited about all of [the proposed gravitational-wave detectors],” said Gabriela González, a physicist at Louisiana State University and LIGO spokesperson. Though the ultimate funding levels for new experiments remain to be seen, she said LIGO’s long-sought detection can only be a boost for the whole field. “We are more optimistic about the future now.”

Gabriel Popkin is a freelance writer based in Mount Rainier, Maryland.