A Medley of Metamaterials 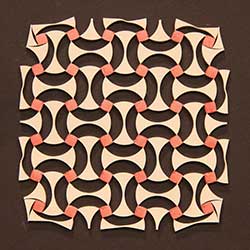 These metamaterials, inspired by patterns in Islamic art, expand in both directions when stretched, and stay locked in their stretched position.

Metamaterials — specially designed, structured materials with counterintuitive properties — can do amazing things. Among the most dramatic are “invisibility cloaks” that hide objects by steering light around them. But another kind, known as a mechanical metamaterial, is structured to tweak mechanical — rather than optical — properties, producing materials that are ultralight, yet strong, for example.

The weird substances were the topic of several sessions at the 2016 APS March Meeting. Researchers drew inspiration for the materials' designs from art, from nature, and even from the toys they played with as children.

When you stretch a rubber band, it gets thinner — it shrinks in the dimension perpendicular to the force applied — as do most materials. But one class of metamaterials bucks the trend: Auxetic materials instead get thicker.

A new type of auxetic material, designed by Ahmad Rafsanjani of McGill University, was inspired by ancient Islamic art. Rafsanjani used geometric patterns from the Tomb Towers, which were built almost a thousand years ago in Kharraqan, Iran, and which display 70 different tessellations and patterns on their walls. Interestingly, Rafsanjani said that two of the patterns are auxetic when made into physical materials. His materials also have the advantage of bistability — they snap into place and hold their deformed shape once they are stretched, rather than relaxing back to their original shape.

The materials, Rafsanjani said, can be easily fabricated on rubber sheets using a laser cutter, and the designs could be useful in devices that need to expand and stay put, like medical stents or solar panels on spacecraft.

Good to the Bone

Bone structure was the inspiration for Ahmed Elbanna of the University of Illinois Urbana-Champaign. He designed a material that becomes corrugated when stretched, and which can be tuned to produce different patterns of corrugation.

Bones are composed of soft collagen reinforced by stiff hydroxyapatite. "They are built like brick-and-mortar," Elbanna said. So Elbanna designed a beam of soft material with staggered stiffer pieces embedded. When the beam is stretched, it forms wiggles, or corrugations, on its surface. "Your surface could initially be flat," said Elbanna, "and then you stretch it, you can create surface roughness that's variable as a function of the stretch."

Such structures could be formed from a variety of materials and in a range of sizes, and the corrugation can be tuned by modifying the ratio of the stiffness between the two components of the material. The material can also be layered, using different patterns of stiff reinforcements to obtain different results, including creating small channels in the material, or corrugation shaped like egg cartons. The material can also be tuned to prevent sound of certain wavelengths from propagating through it, which could be useful for sound isolation.

Paolo Celli of the University of Minnesota grew up playing with LEGOs, and his childhood playthings inspired him to create metamaterials that can be changed just by snapping the plastic pieces into place, to provide a platform for easily testing proof-of-concept metamaterials designs. Additionally, Celli said, the system will be a useful science outreach tool. "We were also looking for something that people could relate to, something that would make our life easier when trying to explain to people what our research is about."

Because of the complex geometry of metamaterials, fabrication is expensive and slow, so it's not possible to quickly and easily test new ideas and different designs. 3D printing is one possible solution, but it is more expensive and slower than rearranging blocks. Additionally, many of the materials commonly used for 3D printing tend to damp waves that travel through them, Celli said. In contrast, LEGOs are made of ABS plastic, which is very stiff and allows waves through without damping.

Celli placed plastic posts in a grid formation on a flat LEGO base plate. He vibrated the material using a shaker located on the plate, and measured the resulting shaking across the plate. Celli found that vibrations within certain frequency ranges wouldn't travel through his material, thanks to destructive interference and energy trapping. The blocked frequency intervals, known as "band gaps," changed when Celli altered the configuration of the plastic posts.

Rapidly spinning gyroscopes were the basis for another unusual metamaterial. Lisa Nash and her colleagues at the University of Chicago created a metamaterial composed of an array of 54 hanging gyroscopes, which interact with one another via attached magnets. The behavior of the material is unique, because the gyroscopes react perpendicularly to applied forces (just as a top precesses in a gravitational field rather than falling over).

The resulting structure has unusual topological properties: When a gyroscope on the edge is excited with periodic bursts of air at certain frequencies, the resulting disturbance travels along only the edge of the array, leaving gyroscopes in the center untouched. The disturbance also travels in only one direction around the edge. The preferred direction depends on the spinning direction of the gyroscopes and the shape of the lattice.

The system could be a step toward creating one-directional waveguides, Nash said. And, since these types of topological effects are more well known in quantum mechanical systems, "It's also just interesting that you can see this phenomenon in a mechanical system like this."

So what's the next frontier in metamaterials? It may be the super-small, according to Itai Cohen of Cornell University. Cohen favors origami metamaterials, which are formed out of thin sheets that can fold and unfold in complex patterns. "You can make very complicated patterns with origami," said Cohen. And importantly, he noted, it is scalable, so the rules of origami remain the same on the tiniest scales. So Cohen focused on the thinnest sheets available: graphene — a one-layer-thick sheet of carbon atoms.

By layering graphene with a thin sheet of glass, Miskin created a sheet that bends when heated, for example, as the glass and graphene expand and contract in different amounts in response to changing conditions. When Miskin heats up the graphene-glass sheet, it curls up into a tiny helix. "We are interested in the ultimate limit of this technology," Miskin said.