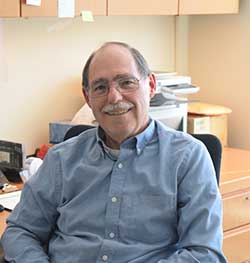 In this series of articles, APS News sits down with APS employees to learn about their jobs, their goals, and the things that make them tick. This month we chat with Corporate Secretary Ken Cole. He discusses APS governance and how his role has changed under last year's corporate reform.

What does the corporate secretary do?

The corporate secretary basically is responsible for anything governance: dealing with the various committees — which of course includes the Board of Directors, the Council of Representatives, and most of their subcommittees, most importantly the Board Executive Committee and the Council Steering Committee — and just being the administrative support and the person who helps keep them together and keeps them moving.

This title was created during the APS corporate reform. How is it different from your previous role?

I've been telling people 95 percent of it is old and 5 percent is new. My previous title was special assistant to the executive officer, and most of that transferred over to the corporate secretary. But the Council Steering Committee and the Board Executive Committee are new, so that's a little bit of additional responsibility.

Why did your title change?

For us to become reincorporated, the DC law required us to appoint someone as a corporate secretary to do the things that I was already doing, but I just didn't have the title. So now we've fulfilled that requirement.

What kind of things do you do to help the different committees?

I do a lot of meeting logistics. That includes working with the chairs — or whoever's in charge of the meeting — to work up agendas, to record minutes, and to make sure that any action items are followed up on, coordinating closely with the CEO.

What work do you do with APS elections?

The general membership election starts with the Nominating Committee. My role includes getting the Nominating Committee together, collecting nominations from the membership, giving the committee historical information so they know who has run, who has been elected, who hasn't been elected, so they'll have all that background. Once they meet and produce a slate of candidates, their job is pretty much done, and I carry on by contacting the candidates, getting their biographical information, setting up the actual election, and running that. And then afterwards, in conjunction with the CEO, contacting the winners and getting them oriented and ready to do their jobs.

Do you have any resources for members who are interested in APS governance?

All of our governing documents are up on the website. We have meeting minutes that go all the way back to when I first started doing the job; they go back to 2000. All of our Board and Council meetings are open to APS members except when the meetings go into executive session.

We have an annual business meeting now — under corporate reform we're required to have that. We had one last year, and we're organizing the second one now. It will be at the 2016 April Meeting. People are encouraged to attend in person, but we are also streaming it live, and we are taking live questions. It will be recorded and posted; in fact the 2015 meeting is currently posted and the 2016 meeting will be afterwards.

How long have you been at APS?

I've been at APS 21 ½ years. When I came to APS I was the administrator for prizes and awards. I did that for six and a half years, and then I started working for former Executive Officer Judy Franz, in the role I have now.

Have you liked it?

It's been wonderful. I have absolutely enjoyed it. I think getting to know some of the brightest, most capable and accomplished scientists in the world — and getting to know them personally, on a first-name basis — has been the biggest kick.

I can remember picking up the phone, and someone says, "Hi Ken, this is Jerry Friedman." Someone of his stature and his accomplishment [Friedman is a Nobel Laureate] to pick up the phone and call you and chat, that was a real kick. I've gotten to know all of the APS Presidents quite well, and they are just top of the top.

Did you have any experience with physics before you came to APS?

No, I took one semester of physics 101, and I said, "This is not for me." So I switched my second semester to biology and did much better. I've always had kind of an interest in science and technology, but never really pursued it. My bachelor's degree is actually in psychology.

What are your hobbies?

My serious hobby is photography, and I've been doing meetings photography for APS for quite a while now [Editor’s note: for example, see the photos on the Kavli article], especially the prizes and awards ceremonies and presidential receptions, that sort of thing. And I've kind of made that into a side business, and want to do more with that as I get more time down the road.

I will guarantee you, without doing any research, that I am the only person that has an actual speed bump in their office, in the whole world. [Cole points to a yellow speed bump on the floor of his office, which previously slowed traffic on Physics Ellipse, the road surrounding the American Center for Physics in College Park.] And I'm about to add another speed bump, because there are chunks of one out there in the parking lot. It's the asphalt that broke away when they were plowing from the last snowstorm. So we have a speed bump circa 2007; we're going to have circa 2016 soon.

This interview has been edited and condensed.