Is Physics Open and Accepting for LGBT People?

By Michael Falk and Elena Long 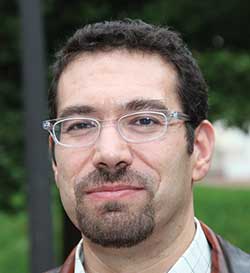 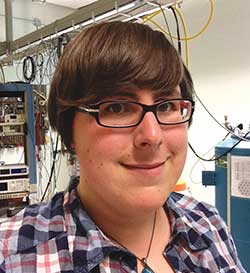 Physicists who differ from the majority by gender or sexuality too frequently face hostility and unnecessary barriers to their participation in our profession. We were recently tasked by APS CEO Kate Kirby to constitute an APS ad-hoc Committee on LGBT [1] Issues (C-LGBT) to “advise the APS on the current status of LGBT issues in physics, provide recommendations for greater inclusion, and engage physicists in laying the foundation for a more inclusive physics community.” Here we share our own stories as out LGBT physicists and then discuss our work with C-LGBT.

Twenty-two years ago, when I was a second-year graduate student, a letter I wrote [2] was published in APS News. The APS Council had approved a resolution stating that APS “will not sponsor meetings in any state or locality that discriminates or prohibits protection from discrimination… . Specifically, the Council deplores the passage … of Amendment II to the Constitution of the State of Colorado… .” Amendment II would have prohibited the adoption or enforcement of any law that would protect the civil rights of gays, lesbians, and bisexuals.

To me, as a 26-year-old graduate student who had just “come out” as gay, the APS action was highly significant. It made clear that within the body that represented my future profession there existed individuals who were willing to stand up so that I might participate fully in physics. The letter I sent was in response to letters from three physicists who did not see things in the same light. To them the statement was a matter of APS overstepping its bounds by capitulating to an “arbitrary political agenda.” “Doesn’t the APS owe more to physicists than to homosexuals?” one inquired, in a casual erasure of my existence.

My letter was my attempt to explain why I found it offensive “to find myself compared repeatedly to alcoholics, pedophiles and practitioners of bestiality and ritual murder” in the pages of APS News. I wondered, “Why is it so much to ask that my professional organization would take me into account when choosing where to place its conferences?” But most striking to me in retrospect is the last sentence in which I expressed my trepidation in writing that letter: “I hope this letter does not interfere with my aspirations in physics, or make me a target for those around me who lack the courage to try to understand me.”

It is always strange to think back on one’s younger self. At the time I was full of passion and anxiety for a future that was, for me, in flux in many ways. Thankfully I had landed in Santa Barbara, surrounded by a supportive advisor and fellow graduate students in a department that had just hired an out gay astrophysicist. Most notable was my office mate, Sora, who faced her own struggles trying to navigate a world that did not always take well to a woman being the smartest and most opinionated person in the room. Sora was equally gifted explaining tough physics problems as she was as a matchmaker, introducing me to my first boyfriend. When I became political, petitioning city hall for a domestic partner registry, I learned that my advisor’s wife, a city councilor, was a supporter. In retrospect I cannot really ever repay the universe for the good fortune that landed me in this bucolic paradise, really almost sitcom-worthy, that integrated physics, human connection, and social integration. Even so, I worried that the world of physics beyond this bubble would not welcome me or my contributions.

It was 2009 when I attended my first APS Meeting, just a year after I had passed my qualifiers and moved to a national laboratory to begin my research. I was loving the work, but concerned about what my opportunities would be if I stayed in physics. Only a few years had passed since I had a research advisor from an research experience for undergraduates program refuse to have anything to do with me after finding out that I was transgender (trans).

The lab I had just started working in had no equal employment protections for LGBT people, and there was no indication that, if I stayed in physics, I would ever be able to get medical insurance that was inclusive of trans-related health care. Moreover, I was struggling to connect with the community of physicists around me, and I was finding the straight male culture inherent in our male-dominated field stifling and isolating.

Before I had moved to the lab, I was vitally connected to lesbian, gay, bisexual, and transgender (LGBT) resources and opportunities on campus. For me, this constituted a “second life” distinct from my studies in physics, and it seemed to me that the two would always be forced to remain separate. Once I arrived at the lab, I was cut off from all of those resources. There was only the physics, and nowhere to voice my concerns about becoming successful as a professional physicist who happens to be trans.

I began searching for resources and tried to connect with other LGBT physicists to see if I was alone in the issues I was facing. At the time, I could find only a few online homework help forums where topics like this were broached. When someone would ask if they were the only gay physicist, they were met with multiple pages of replies telling them that it doesn’t matter, and that there is no connection between being LGBT and science. A repeated message was that if anyone ever talked about being LGBT in a professional setting that it would hurt their career.

In spite of this, I naively thought that some kind of support must exist. When I attended that first APS meeting, I participated in a lunch seminar hosted by the Committee on the Status of Women in Physics. After the presentation, I asked where I might find resources for LGBT physicists. The room fell silent. Finally, after a long pause, someone quietly offered, “Huh. We never thought of that.” As a young graduate student, in that moment, I dreaded that there would never be a place for me in physics.

Our work with APS

In preparing the recently released C-LGBT report, entitled “LGBT Climate in Physics: Building an Inclusive Community” [3], we held numerous focus group discussions with physicists, worked with the APS Membership department to include a demographic question in the most recent APS membership survey, and carried out an independent climate survey. The results were at the same time heartening and sobering.

This work culminated a process that had started many years prior, instigated to a large extent by Elena Long, the co-author of this Back Page, through her work within the APS Forum on Graduate Student Affairs and starting the independent lgbt+physicists group. The lgbt+physicists organization has focused on addressing issues for sexual and gender minoritie in physics, such as employment discrimination, professional networking and mentoring opportunities, lack of access to health care, and a lack of statistics. Its volunteer members have also created a guide, “Supporting LGBT+ Physicists and Astronomers: Best Practices for Academic Departments” [4].

As our two personal experiences illustrate, the climate for LGBT individuals in physics is highly variable, and this was reflected in the data that C-LGBT gathered. When we asked the 324 LGBT respondents about their level of comfort in their department or division the rate at which respondents noted this to be “uncomfortable” or “very uncomfortable” was significantly different for male (15%), female (25%), gender-nonconforming (30%) or transgender (30%) respondents. Being “out” at their workplace or university correlated significantly with a respondent’s level of comfort. Furthermore 22% of respondents had experienced exclusionary behavior that could range from shunning to harassment, and this was significantly higher, nearly 50%, for transgender respondents. Tellingly, 40% of respondents agreed with the statement that “Employees are expected to not act too gay.” 45% of respondents disagreed that “Coworkers are as likely to ask nice, interested questions about same-sex relationships as they are about heterosexual relationships.” Over a third (36%) of LGBT participants considered leaving their institutions in the year prior to taking the survey.

These responses reinforced many of the accounts we heard during focus groups and in survey free-form responses regarding feelings of isolation, invisibility, and lack of supportive mentorship. The most hostile and harrowing of these were reported by transgender physicists, by those who did not conform to standard gender norms, and by those who carried multiple identities that differed from the majority, e.g. those who are female and bisexual or those who are black and gender-nonconforming.

Since the obligation to hide or minimize sexual and gender difference was a recurrent theme for those facing hostile environments, this has caused many of us on the committee to reflect on the operation of “the closet” in physics. The phrase “to be in the closet,” meaning that a part of one’s identity is obscured to others, has long been a descriptor of the lesbian, gay and bisexual experience. Similar issues around conformity and “stealth” related to hiding a gender transition also mark the trans experience. Since these differences are not immediately apparent, in the face of social hostility individuals can find it beneficial to hide these aspects of their identity, but at a cost. Being “in the closet” cuts one off from the kinds of support that others routinely expect from their colleagues: social connections, inclusion of important family members in gatherings, understanding in the face of family emergencies or crises, support during trying emotional times, help navigating the conflicts between career and personal motivations. For some this is the devil’s bargain one makes to become a working physicist.

In physics, this pressure for LGBT scientists to remain closeted is most often communicated to them by their colleagues as disdain for the importance or relevance of the personal in the context of physics. In response to our membership survey question, posed to 2,596 APS member respondents, approximately 2.5% openly identified as LGBT. Significantly, respondents in the 18 - 25 age range were significantly more likely (16.3%) to identify as LGBT and less likely to choose not to provide this kind of information (6% vs. 14%). Clearly the issue of LGBT identity may presently be both more salient and less taboo to physics students in undergraduate and graduate physics programs than it is to their professors.

Also notable within the written comments was a small but noteworthy number (20) of strongly negative responses to the abovementioned self-identification question on the membership survey. These responses generally fell into two main categories: denying the relevance of the question or objecting to the question as offensive. Whether LGBT students and physicists find our profession a nurturing home for their development as scientists and human beings will, to a large part, depend on whether their advisors, colleagues, mentors, and employers are able to support them as whole people and have the courage to try to understand them.

Michael Falk is a professor at Johns Hopkins University who deploys computational methods to develop physical theories of non-equilibrium processes in materials. He is chairperson of the APS C-LGBT, has served as a member-at-large for the Group on Statistical and Nonlinear Physics, and was a recipient of the APS Nicholas Metropolis Award for Outstanding Doctoral Thesis Work in Computational Physics. He also leads an NSF-funded Math and Science Partnership with Baltimore City Schools, STEM Achievement in Baltimore Elementary Schools (SABES).

Elena Long is a postdoctoral research associate at the University of New Hampshire; she studies experimental hadronic physics with an emphasis on nucleonic spin structure. She is also the founder of the organization lgbt+physicists, serves on the APS C-LGBT and is the vice president of diversity and inclusion for Out in Science, Technology, Engineering, and Mathematics (oSTEM).