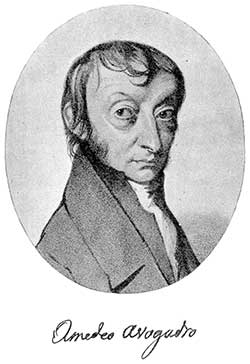 Amadeo Avogadro, (1776-1856), lived in a time of flux and uncertainty, in physics and in the governance of his community. In physics, the very nature of the elements was debated by the leading scientists: Was oxygen an atom or a diatomic molecule? In governance, Turin, and the Piedmont Region where he lived were ruled successively by the Dukes of Savoy, the King of Sardinia, and Napoleon Bonaparte, and threatened by the army of the Austro-Hungarian Empire.

Finally Turin was returned to the house of Savoy, all of this during Avogadro’s lifetime, while he lived in the same home. He resolved the molecule question in physics, and, to the detriment of his career, gave his support to a political cause during the aftermath of Napoleon’s legislation. His discovery of the fundamental numerical property of gases underlies our understanding of the molecular world. His political activities cost him his professorship at the University of Turin, but he was reinstated in the next political cycle, not long after.

His full name was Lorenzo Romano Amedeo Carlo Avogadro, from a family with a long history in the legal profession. Their name derives from avvocato, Italian for lawyer. He followed the family profession for some years, then, self-taught, began to work in physics. He became professor of physics at the Academy at Vercelli, and later at the University of Turin.

Much of physics, at the time, was focused on the nature of gases. The French physicist Joseph Louis Gay-Lussac observed that, in reactions of gases, the relative volumes of reactants and products appeared to be in the ratio of small whole numbers. Avogadro went on from there [1].

He concluded that the only way to explain Gay-Lussac’s observation was that, under identical conditions of temperature and pressure, for all ideal gases, any given volume must contain the same number of molecules. Avogadro’s number, NA, is the number of molecules in the volume occupied by a gram molecular weight of an ideal gas. The magnitude of NA was determined in many later experiments, converging on the now-accepted value: NA = 6.023 x 1023 particles per mole. The equal-number-per-unit-volume concept is now known as Avogadro’s law.

The other major question at the time was whether the elemental gases, hydrogen and oxygen, were atoms or diatomic molecules. Avogadro neatly resolved this question as well. He noted that if the gases were atoms, the reaction:

would give a volume of H2O gas equal to the volume of oxygen. On the other hand, if hydrogen and oxygen were diatomic molecules,

would give a volume of H2O twice that of the oxygen. The experiments clearly confirmed that the latter equation was the correct one. This resolved the question once and for all. Avogadro was the first to understand that hydrogen and oxygen were diatomic molecules. To appreciate the prescience of Avogadro’s achievement, note that, curiously, a century later, some influential scientists in the physics community still questioned the very existence of individual molecules. Illustrating this remaining difference in views, the citation [2] for Jean Baptiste Perrin’s 1926 Nobel Prize in Physics read, “for his work on the discontinuous structure of matter, and especially for his discovery of sedimentation equilibrium.” At the time, referring to Perrin’s work, one scientist noted, “This put an end to the long struggle regarding the physical reality of molecules.”

When he first published his work, the scientific community took little note of Avogadro’s discovery. In part, this was because he made no effort to visit scientists in France and Germany to explain his ideas. Also, there were apparent exceptions to the law that all ideal gases contain the same number of molecules per unit volume. For example [3], solid NH4Cl dissociates as it vaporizes to form the molecules NH3 and HCl:

Thus, for a given quantity of NH4Cl, the vapor contains more molecules than it would if the NH4Cl vaporized intact. This and some similar systems, appeared to invalidate Avogadro’s law. When the dissociation became known and understood, this was no longer the case. Eventually, in 1860, the Italian chemist, Stanislao Cannizzaro, defended Avogadro’s work before the leading European scientists at an International Chemical Congress in Karlsruhe, and the validity of Avogadro’s law was finally recognized. Unfortunately, Avogadro had died several years earlier.

Today, 200 years after he proposed it, Avogadro’s law is taking on a new life in physics. In an article, “A More Fundamental International System of Units” [4], David Newell explains how the system of units will now be based entirely on physical constants. Physical objects, such as the long-used standard meter, with two marks on a platinum bar, and the standard kilogram, a platinum weight, both maintained under controlled conditions in Paris, were long among the reference standards for physical units. Nowadays, the units are defined by seven physical constants, one of which is Avogadro’s number. The others are: the velocity of light in vacuum, Planck’s Constant, Boltzmann’s Constant, the charge on the electron, the frequency of the cesium-133 hyperfine splitting frequency, and a luminous intensity unit. Thus Avogadro’s idea, barely recognized during his lifetime, lives on centuries later as one of the pillars of modern science.