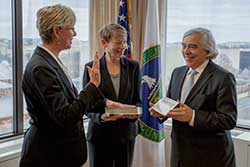 The swearing-in of Cherry Murray (at left) as Director of the Office of Science by Secretary of Energy Ernest J. Moniz. December 18, 2015 at DOE Headquarters, Washington, D.C. The third person is Cherry Murray's sister, Nancy.

The new director of the Department of Energy (DOE) Office of Science, Cherry Murray, has just a year to accomplish her goals before her term ends with the Obama administration’s exit. But Murray still has plenty of plans in store. “It’s a short time, but I actually think there can be some accomplishment,” Murray says. “So, of course I have a gazillion priorities, but I am very much focusing on several of them.”

First on her list is maintaining the Office of Science’s support of fundamental research. “We are the biggest supporter of physical science in the U.S., and I want to absolutely maintain that,” she says. But she hopes also to expand the Office of Science’s focus on research that falls within “Pasteur’s quadrant.” Such research, like that of 19th century chemist Louis Pasteur, sheds light on fundamental scientific questions but is also inspired by potential applications.

“I come from industry, and I think it is absolutely essential for advancing technologies — such as energy technologies or national security, which is another role of the department — to have breakthroughs in science.” To this end, she plans to collaborate with other offices within DOE, like the Office of Energy Efficiency & Renewable Energy (EERE), that work on applied energy technologies.

An experimental condensed matter physicist, Murray has held a variety of prominent leadership positions in the scientific community, including the presidency of APS in 2009. She served as dean of Harvard University’s Paulson School of Engineering and Applied Sciences between 2009 and 2014. Prior to that, she was the principal associate director for science and technology at Lawrence Livermore National Laboratory (LLNL). After receiving her B.S. and Ph.D. in physics from MIT, she began her career at Bell Labs in 1978, where she stayed until 2004, eventually moving into management roles during her time there.

Murray, whose appointment was confirmed by the Senate on December 10, 2015, took over from Patricia Dehmer, the deputy director for science programs in the Office of Science, who served as acting director after the previous director, William Brinkman, left in 2013. With just a few weeks at the helm when APS News spoke with her, Murray says she is happy to be there. After she stepped down as dean of the Paulson School, she says she received a phone call from Secretary of Energy Ernest Moniz, who asked her to take on the job. “I decided, ‘Why not?’ I haven’t been in government before. Been in industry, been in a national lab, been in academia.”

At LLNL, a DOE lab under the National Nuclear Security Administration, Murray says, “I learned about the complexity of the DOE system and the absolutely essential nature for national security.” The labs, she says, serve as “emergency expertise” for the country — citing, for example, the technical assistance the labs provided for the negotiations leading up to the agreement reached with Iran last year to dismantle parts of its nuclear program.

Murray also served on the Commission to Review the Effectiveness of the National Energy Laboratories, which released a report in fall 2015, outlining suggested improvements to DOE’s national labs. (See APS News January 2016.)

Following up on the recommendations made by that commission, Murray says she hopes to merge the review process the Office of Science uses for its labs with other parts of DOE, to create “a review process that doesn’t just review the science programs, but the science programs and the applied energy programs” together. She adds, “These labs are an incredible national resource, and the programs don’t all necessarily know the capacities that these labs have because they only fund their particular program.” Within the Office of Science labs, Murray says, “Some of them have 50% of their portfolio outside the Office of Science and we need to steward that whole responsibility.”

Fitting construction of new scientific facilities into the Office of Science budget while maintaining research funding is also important, Murray says. “We have a balance between building the major facilities that are necessary for the community to do world class science, and funding the research so that they can actually do the world class science.”

To make sure that the most essential science gets funded, Murray highlights the importance of communities setting funding priorities and creating long-term plans, like the 2014 Particle Physics Project Prioritization Panel (P5) report and the 2015 Long Range Plan for Nuclear Science. When a community gets together, she says, “We know what we need to do: We have to fit it in the budget.”

Murray attributes her lifelong interest in science to her older brother’s influence — and a bit of a competitive spark. Her brother was a graduate student in physics at MIT when she was applying to colleges. “He basically said, ‘There’s no way you could do physics, and definitely not at MIT.’ So I applied to MIT, and I got in!” (Her brother has no recollection of this conversation, Murray says.)

Murray had always thought she would become an artist — she comes from a family of painters. But the hands-on experience she got at MIT clinched her interest in science. “From freshman year on I did research in a lab and that’s what really got me hooked on physics,” she says.