Art and Science in the Gallery of Fluid Motion 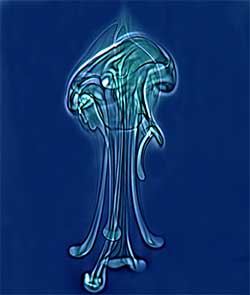 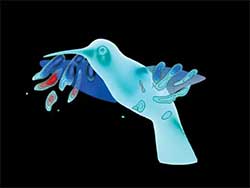 Simulation of the airflows created by hummingbird wings during maneuvering flight. (Video V0088 at gfm.aps.org, winner of a Gallery of Fluid Motion award.) 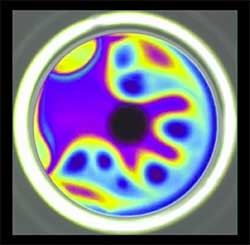 Optical patterns produced by chaotic flows on the surface of a soap bubble. (Video V0040 at gfm.aps.org, winner of a Milton van Dyke award.)

Surface waves created by small droplets bouncing on an oil bath. (Video V0064 at gfm.aps.org, winner of a Gallery of Fluid Motion award.)

Erosion patterns modeled with water flowing over caramel. (Poster P0051 at gfm.aps.org, winner of a Gallery of Fluid Motion award.)

Attend the APS Division of Fluid Dynamics (DFD) meeting and you’ll be served a fairly conventional menu of plenary talks and technical sessions. Off the beaten path, however, you might find a feast for the eyes.

Each year the meeting hosts the division’s Gallery of Fluid Motion (GFM), which showcases the winners in the annual contest for the best short videos and colorful poster presentations. These highlight how modern visualization methods and computer power can convey the complexity of fluid behavior (GFM is at gfm.aps.org).

And it’s not just science — also included is the aesthetic pleasure of motion, color, sound, and light. GFM coordinator Ken Kiger remembers his first encounter with the gallery: “As a first year grad student, I went to the DFD with my advisor,” Kiger recalls, “and they had this gallery up. I was captivated.” Kiger is a physics professor at the University of Maryland and has been running the gallery since 2010. “I’ve always felt there was an aesthetic quality to the fluid motion.”

This year’s gallery featured videos and posters ranging from colorful simulations of hummingbird flight to gruesome but effective models of blood loss and hemorrhaging produced by a projectile passing through a human leg. Applied work involving new kinds of spray nozzles was displayed next to fundamental vortex ring dynamics. One clever video titled “A Day in the Life of a Fluid Dynamicist” showed many of the ways that we interact with fluid phenomena whether we know it or not.

The inspiration for the gallery came in the 1980s when physicist Milton van Dyke compiled a photo album to help teach fluid mechanics. “He solicited images from the community, and got over a thousand,” says Kiger. “Then, in 1983 [fluid dynamicist] Helen Reed organized the first Gallery of Fluid Motion at the division meeting. Apparently there was pent-up demand because they got 70 entries.” That number is even more significant when you consider that three decades ago the meeting had only 400 attendees, compared to over 3000 now.

Back then, the gallery entries were poster presentations. “Video entries came a decade later,” Kiger explains, but even then it was cumbersome. “They had to be sent in on VHS tape, local organizers had to dub a master tape, then put it in a VCR and have it loop. It was tedious.”

After a few years of tape wrangling, the division reached out to APS, which now hosts the gallery online. At modern-day DFD meetings, the videos are displayed on eight flat-screen monitors next to the poster presentations. And at this fluids cineplex, red/green glasses are handed out for 3D videos.

Awards are given for the best entries and the criteria vary from meeting to meeting. “For the most part [the judges] are told it’s an aesthetic gallery,” Kiger says. “There should be some technical relevance, but we have a lot of [other] venues for technical presentations. [The entries] should be primarily visually representative of a phenomenon in an eye-catching or artistic way.”

The artistic side of fluid motion also fascinates Nicole Sharp, originator of the provocatively named website F*ck Yeah Fluid Dynamics (Editor’s note: Fill in the vowel yourself.) Sharp, a recent Ph.D. graduate in mechanical engineering, serves on the DFD Committee on Media and Science Relations.

Her award-winning website features video and photographic examples of fluid motion, along with explanations of what readers are seeing. “I get a lot of comments from people, some of them in the fluid dynamics community,” she says. “They really appreciate a lot of different features of the website, like seeing explanations of phenomena they don’t see anywhere else, or seeing the visuals and how they relate to everyday life.”

Asked about the website name, she admits that is poses a few problems. “I’ll hand my business card to someone and they’ll crack up two seconds later,” Sharp says. She picked the name at a time when several websites catering to fans of actors and television shows had similar monikers. “I didn’t expect the website to grow this much, so I might have picked a different name.” Occasionally she is asked for a cleaner URL though. “Some people can’t load the site at work, and I think the entire country of Saudi Arabia can’t get access.”

FYFD, as it is more concisely known, has been featured in Wired magazine as a recommended science site to visit, and now has 223,000 followers. “I was on that list with Neil deGrasse Tyson and [astronomer and blogger] Phil Plait, which was pretty stunning for me as a graduate student,” says Sharp. The website was initially a labor of love, but Sharp has opted to go full-time with it and is working to secure funding.

“One of the things that is neat about the gallery is that they’re constantly looking for new ways to innovate with it and to expand it even further,” explains Sharp. “It’s gotten enormously popular in the past few years — everybody wants to have a video in the gallery and everyone wants to have a shot at winning. I love the website because it provides a ton of material for me.”

Both Kiger and Sharp hope to do more public outreach in the future. “The director of the computational science center at Stanford contacted me because they have a large building they display art in,” says Kiger. “She thought it would be great if we could print and frame some of our best entries and display them.” Kiger thinks some kind of traveling fluid dynamics roadshow would be a way to inform the public about the field.

Now that Sharp is full time at FYFD, she plans to get more involved in science communication. “It’s been my source of passion and interest, but I’d like to expand the site to content creation,” she says. “The nice thing about making my own videos or working with researchers to make videos is that I can really put the explanation that is the heart of FYFD in with the visuals – have everything together in a single product.”