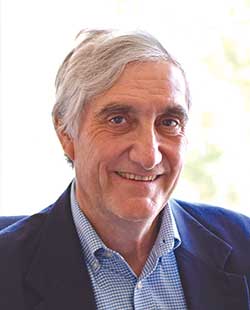 When APS revised its governance structure last year, a new elected position on the Board of Directors was created: treasurer. The first person to fill that role will be James Hollenhorst, senior director of technology at Agilent Technologies. He takes over for Interim Treasurer and Past President Malcolm Beasley on January 1, 2016.

As the first elected treasurer, Hollenhorst will play a part in defining the responsibilities of the position. “I think that it’s an important role, and it’s exciting that it’s a new role that is being created, so there won’t be a tremendous amount of legacy that I’ll have to conform to,” he said.

Hollenhorst believes that the governance reform that created his new role has strengthened the Society. “We’re really on a much firmer foundation — a more professionally managed operation — now, through those corporate governance changes.”

As treasurer, his main responsibilities, Hollenhorst said, will be to make sure that financial planning within APS is well managed, that the right processes are in place to monitor the Society’s finances, and that there’s a solid system of strategic budget planning. Finally, he will oversee the investment of the APS endowment. “Thankfully we don’t have a bunch of volunteer physicists who are deciding how the money is invested, but we have professionals who do that for us,” Hollenhorst joked. “But, we have some very smart physicists on the Investment Committee who are ... reviewing what our financial consultants are doing,” he added. The Investment Committee reviews the performance of the Society’s investments manager and the inverstment policies of the Society.

After completing his Ph.D. at Stanford, Hollenhorst worked at Bell Labs for over a decade, focusing on semiconductor device physics. He then moved to Hewlett-Packard (HP) Labs, and later the HP spin-off company Agilent. At HP he worked initially on superconductivity, before eventually becoming director of electronics research for Agilent. Later, he took on the role of director of life sciences and chemical analysis research, before assuming his current position as senior director of technology.

Through his years in laboratory management, Hollenhorst has experience budgeting and dealing with finances, and he’s “always had an interest in the financial end of things,” he said. But “I’m first and foremost a physicist and not a financial person.”

APS is a healthy organization, Hollenhorst said. “They obviously have the best physics journals in the world and provide benefits to members and to society that are something to be very proud of.” But navigating the waters of the open-access publishing movement is a prominent challenge he foresees. “That’s a trend that goes well beyond scientific publishing,” he said. “Everybody these days wants all information to be free, and yet it costs a lot of money to produce quality information.”

However, the physics community has been ahead of the curve on open access, he points out. Physicists created the preprint repository arXiv, and were early adopters of online dialogue. “We’ve in fact invented some of the technologies that are prominent in communication these days,” he said, citing the development of the World Wide Web at CERN. Managing the challenges and harnessing the opportunities of communicating in this landscape will be prominent issues for APS, Hollenhorst said.

The proliferation of low-quality, unreliable sources of information online only makes APS’s role more essential, he said. APS “has the opportunity — but also has the responsibility — to be a voice of reason and the voice of information you can trust about science, and physics in particular.” Hollenhorst believes APS should leverage its reputation as a reliable source as much as possible. “That will be possible only if we’re financially stable,” he added.