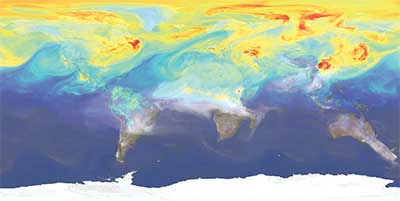 Computer models of atmospheric carbon dioxide levels, like the one shown here, could be refined with data from remote sensing with lasers.

Across the globe, over a hundred monitoring stations regularly measure the carbon dioxide concentration in our atmosphere — cataloging both its seasonal fluctuations and its seemingly relentless rise. But to better understand the impacts of humanity’s constant belching of greenhouse gases, scientists are making the case that CO2 should be monitored more like the weather. The existing ground-based monitoring stations are not enough to precisely predict what CO2 concentrations will look like in the future, they say. “Could we predict the weather if we had only 150 weather stations around the world? Yeah, we could, about as well as we did in 1930,” says David Crisp of NASA’s Jet Propulsion Laboratory.

At the Frontiers in Optics / Laser Science meeting this October in San Jose, researchers discussed efforts to collect hundreds of thousands of measurements daily from space using sunlight and laser remote sensing, with the goal of amassing enough data to tease out the complex web of carbon dioxide sources and sinks, and predict how they might change as the planet warms.

Carbon dioxide is constantly being emitted and absorbed, by both natural and human processes. As plants burst into growth in the spring, they take up carbon, and CO2 levels in the atmosphere drop, only to rise again in the fall. But CO2 in the atmosphere doesn’t stay put — it travels around the planet with global wind patterns.

“We’re already measuring a bunch of things from space,” Crisp says — including important climate variables such as precipitation and albedo (the reflectivity of Earth’s surface). But concentrations of CO2 in the atmosphere vary by only a few percent overall, so satellite instruments must be accurate to within a few tenths of a percent to be useful. “We’ve never been able to make a measurement as precise as the one we need to make to measure carbon dioxide until recently,” Crisp says.

Of the more than 30 billion tons of carbon dioxide that are emitted each year, only about half stays in the atmosphere. The remainder is taken up in the biosphere, with much of it going into the oceans, which absorb about 10 billion tons a year. The rest goes into plants and soil, but scientists haven’t been able to account for exactly where it all ends up. “There’s a missing sink,” says James Abshire of Goddard Space Flight Center, “so there’s an absorption of CO2 that can’t be accounted for in the present climate models.” Understanding this missing carbon sink is important for predictions of future carbon dioxide levels, and their effect on our climate.

In July 2014, NASA launched the Orbiting Carbon Observatory-2 (OCO-2), dedicated to capturing a satellite’s-eye view of the carbon cycle. It is now training its three high-resolution grating spectrometers on Earth from an altitude of 700 kilometers. These spectrometers observe sunlight reflecting from Earth’s surface, and monitor three near-infrared wavelength bands for absorption signatures of CO2, and, for reference, O2. OCO-2 makes a million measurements as it orbits Earth each day. Due to imperfect atmospheric conditions, only about 100,000 to 200,000 of those measurements are useable. The results can then be used to calculate the CO2 concentration in the path the sunlight traversed through the atmosphere. “It’s really a pretty simple device; it basically is the spectrometer you used in physics class,” says Crisp, the science team lead of OCO-2.

The mission follows earlier efforts to measure CO2 from space with spectrometers, including a Japanese effort, GOSAT, which launched in 2009.

These satellites make passive measurements that rely on the sun, and as a result are easily foiled by cloudy skies or haze, which can impede measurements at high latitudes in particular, Abshire says. And polar regions are dark one season a year, making sunlit measurements impossible. “And if you’re studying problems like what’s happening in Siberia in the summertime, or even in northern Canada, having coverage up there is obviously essential,” Abshire says. “It’s a tremendously challenging remote sensing experiment.”

But according to Abshire, a satellite equipped with Light Detection and Ranging (LIDAR) — the laser version of radar — would avoid many of these issues. Such experiments would beam a laser down to Earth’s surface, and use a telescope to monitor the reflected light. The wavelength of the laser would be targeted to a particular absorption line, and could be varied to measure several points along the line. And with a pulsed laser, timing can be used to calculate the path length the light has travelled, which is important for estimating the CO2 concentration.

Such experiments will be better at making meaningful measurements in a variety of atmospheric conditions, with even better spatial resolution: Whereas passive sensors typically observe a spot a few kilometers across, the corresponding width for LIDAR could be about 50 to 100 meters, Abshire says.

NASA has future plans for such a mission: Active Sensing of CO2 Emissions over Nights, Days, and Seasons (ASCENDS). Preliminary tests of LIDAR systems in aircraft have been consistent with traditional gas sampling measurements.

Measuring carbon dioxide will be useful in understanding how to deal with our climate crisis, Crisp says. The measurements can improve models, and provide more information to policy makers. In the future, such methods could also allow remote monitoring of what a country is emitting — and whether it is sticking to its end of climate treaties that limit greenhouse gas emissions.

But treaty validation is only one step of the process. “Not only do they tell you whether or not somebody’s following the rules, they tell you whether or not the rule that you’re following works in reducing carbon dioxide emissions,” Crisp says. For example, if you plant trees, does that really reduce carbon dioxide levels? Space-based measurements could provide a means of finding that out.