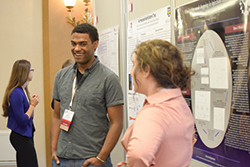 Undergraduate Cedric Wilson chats with conference attendees in front of his poster.

The poster session at the Frontiers in Optics / Laser Science (FiO/LS) meeting buzzed with chatter, animated gestures, and explanations of original optics research. Attendees peppered the presenters with questions, but one came up with particular frequency: “Are you a master’s student?” The answer was always negative — they were all undergraduates. The presenters were participants in the meeting’s symposium on undergraduate research, yet their work belied their level of education, rivaling that of more advanced students.

FiO/LS, a joint meeting of The Optical Society and the APS Division of Laser Science (DLS), took place in San Jose this October. The Symposium on Undergraduate Research, a tradition at FiO/LS meetings, is hosted by DLS, which provides some funding for students to attend, with additional funding coming from sources like the National Science Foundation (NSF) and the students’ home institutions. Since the symposium began in 2001, hundreds of students have taken the opportunity to present their work.

“I love getting to be somewhere where I can just talk about physics and other people are really excited about it too,” says Julie Gillis, a senior at Duquesne University. She spent her summer at Fermilab, as part of the Summer Internships in Science and Technology program. She worked on the superconducting electron linear accelerator at the Fermilab Accelerator Science and Technology (FAST) facility, a proving ground for accelerator technology. The FAST accelerator relies on a drive laser system that produces electrons when the laser strikes a photocathode. Gillis optimized one of the amplifiers for the laser system. “ I had a fantastic team that I worked with,” Gillis says “They wanted me to experience as much as I could.”

The driving force behind the session is Harold Metcalf of Stony Brook University, who shepherded the students throughout the day, pushed them to ask questions, and encouraged them to get to know each other and other scientists at the event.

“They learn they’re not the only ones” interested in this type of research, Metcalf said. “All of a sudden they’re in a community.” The symposium fulfills an important need for opportunities for the young scientists to present their work, Metcalf says. “They’re undergrads — they have no other way to get their stuff out there.”

Metcalf also founded the Laser Teaching Center at Stony Brook, which provides opportunities for undergraduates to get their first taste of laser research. John Noé, who organized the undergraduate symposium along with Metcalf, serves as the center’s executive director. Of his work with students, Metcalf says, “I don’t get anything tangible out of it, but there are a lot of intangibles ... I feel that as an educator I should give back.”

Rachel Sampson, a senior at Stony Brook, got her start at the Laser Teaching Center, and went on to participate in the NSF’s Research Experiences for Undergraduates (REU) program. She spent this summer doing an REU at the University of Arizona.

She worked on creating a diffraction-based optical switch for communications. Data traffic and flow is rapidly changing, Sampson says. “It’s important that our technology can keep up with that.” Sampson enjoys the chance to interact with scientists attending the FiO/LS meeting, she says, especially the possibility that other scientists may offer her ideas to improve her work, or that she could contribute to theirs. “There’s definitely a good sense of collaboration at this meeting,” she says.

Faculty mentor Hong Lin, of Bates College, has sent her students to the symposium for ten years. “It provides a very good opportunity for undergrads to share their research experience,” she says. “Not only can students talk to their peer students, but also they can talk to professional scientists.” Interest in the symposium has grown since Lin began sending her students here, she says. The first symposium had ten presenters, but has grown to host 40 or 50 students. “It grew and grew,” says Metcalf, and now it’s “an institution.”

Many of the students plan to attend graduate school after college. Cedric Wilson, a student at the University of Utah, is applying to graduate programs in atomic, molecular, and optical physics and cold atoms. This summer, he participated in an REU at the University of Rochester, where he worked on modeling and improving an atomic trap for making a Bose–Einstein condensate. “The research was right up my alley,” he says. It was harder for him to find opportunities that fit his interests at his home institution, he says.

Ahmad Azim, a senior at the University of Central Florida, is working on construction of an ultrafast laser system. He says the meeting is a great experience for aspiring researchers like him. “I want to go to grad school, get my Ph.D., become a research scientist, and do that for the rest of my life,” he says. “There’s a lot of great scientists here who inspire me to do that.”

At a lunch during the symposium, faculty mentors spoke about their experiences in optics research, advising students on how to get a job in industry, and describing their career arcs. The lunch was followed by two sessions, in which students gave short talks on their research. When one mentor asked the students how many of them had never attended a scientific conference before, hands shot up in the air. “This is their launching into what it’s like to go to a big meeting,” Metcalf says.