October 8, 1945: First Patent for the Microwave 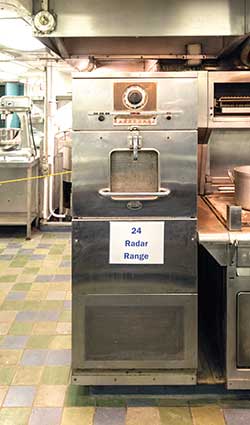 The first Radarange microwave oven weighed over 300 kg, had to be water cooled, and cost $52,000 in today's dollars. This model was installed on the nuclear-powered cargo ship Savannah.

In January 1947, commuters in New York City’s Grand Central Terminal took note of a fast-food vending machine, the Speedy Weeny, offering hot dogs cooked in a new invention: the microwave oven. Now a staple of the modern kitchen, it was the brainchild of Percy Spencer, a self-educated Maine farm boy with an insatiable curiosity about how the world works.

Born in Howland, Maine, in 1894, Spencer was just 18 months old when his father died. His mother, unable to cope as a single parent, left the boy’s upbringing to his aunt and uncle. Spencer’s uncle died when he was seven, so he and his aunt began traveling around New England, she working as an itinerant weaver and he working whatever odd jobs he could find. He later recalled that he had to “solve [his] own situation” during that difficult time, and that resiliency and “Yankee ingenuity” served him well in life.

His education was intermittent, too, and by the fifth grade he dropped out of school completely to work in a factory. When a local paper mill decided to install electricity four years later, he volunteered to help set up the new system, even though he knew nothing about the subject, and was just sixteen years old. Through a combination of experimentation and poring over textbooks at night, he ended up a highly skilled electrician.

Inspired by the heroic actions of the radio operators on board the sinking Titanic in 1912, Spencer became interested in the new wireless technology. He joined the Navy to become a radio operator, boning up on trigonometry, calculus, chemistry, physics, and metallurgy in his spare time. “I just got hold of a lot of textbooks and taught myself while I was standing watch at night,” he later recalled. When World War I ended, he joined the fledgling American Appliance Company (later changed to Raytheon), founded by physicist Charles Smith and engineers Lawrence Marshall and Vannevar Bush.

Early in his research career at the company, he noticed a small leak in one of his photoelectric tubes. Usually scientists discarded such tubes as defective, but Spencer was curious about what might be happening. He discovered that the leak actually increased the tube’s efficiency — an insight that proved to be a critical step in the development of the television cameras.

Then World War II broke out, and the company became responsible for building prototypes of combat radar equipment for the war effort. As a result, Spencer’s tube division at Raytheon grew from 15 employees to more than 5000. Early in the 20th century, a German inventor named Christian Hulsmeyer realized that reflected radio waves could reveal the direction and range of nearby ships, a handy safeguard for avoiding harbor collisions. Wartime research gave rise to the cavity magnetron, a high-frequency tube with multiple built-in resonant cavities for producing a high-power microwave beam. The magnetron enabled British radar systems to spot approaching German bombers.

Spencer figured out how to mass-produce the magnetrons in those systems. Originally the cavities had to be machined out of solid copper; it took a skilled machinist weeks to complete just one. But Spencer found a much better way: He adapted a machine to stamp out thin cross-sections of the metal, stacked them, and then fused them to form the cavity via an oven with a conveyer belt.

Heating materials with high-frequency electromagnetic waves was first proposed in 1934, based on research at Bell Labs, which filed for a patent in 1937. One day, as Spencer stood near an active radar set, he noticed that a candy bar in his pocket had melted, and realized that microwaves might be used to cook food. To test his hypothesis, he placed popcorn kernels near the magnetron. As he suspected, they began to pop. Next he cut a hole in the side of a kettle and put an egg in it before directing microwaves through the hole. It worked again, except the egg exploded, splattering the face of a skeptical colleague who was peering into the kettle at the wrong time.

Following up on these simple experiments, Spencer soon realized that a rectangular metal box would make a fine resonant cavity for cooking. Recognizing the commercial potential, Raytheon filed a patent for a microwave cooking process on October 8, 1945, and the Radarange hit the market in 1946.

The invention didn’t catch on at first, hampered by public fears of microwave radiation, and by the sheer cost and size. Those microwave ovens were huge, nearly six feet tall and more than 750 pounds, and cost $5000 — the equivalent of more than $50,000 in today’s currency. The first countertop home model went on sale in the 1950s for a more affordable $495, and by 1997, fully 90% of U.S. households owned a microwave oven.

Spencer died in 1970, having never earned more for his microwave than the $2 bonus Raytheon typically awarded employees for their patented inventions, although all told he racked up 300 patents during his career there. But he reaped plenty of recognition, including an honorary doctorate from the University of Massachusetts and a Raytheon building named in his honor. Above all, Vannevar Bush said that Spencer “earned the respect of every physicist in the country, not only for his ingenuity, but for what he has learned about physics by absorbing it through his skin.”