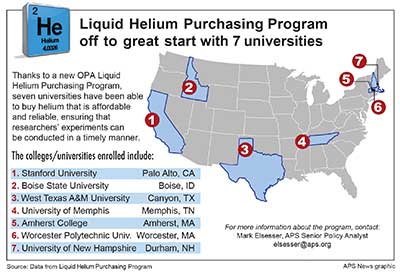 “We were concerned because we are both a new customer and a small customer,” recalled Catherine F. M. Clewett, assistant professor of physics at the university. “We had never ordered liquid helium and were finding it difficult to begin a relationship with the major helium companies.”

Those concerns have abated, thanks to the Liquid Helium Purchasing Program developed by the APS Office of Public Affairs (OPA). Last year, after learning of academic users’ concerns about liquid helium price fluctuations and reliability issues, the OPA partnered with the Defense Logistics Agency (DLA) to pilot-test a liquid helium “brokerage,” enabling academic users to obtain helium in a timely manner and at a reasonable cost. Recognizing that the issues were not exclusive to physicists, the OPA also partnered with the American Chemical Society (ACS). Enrollees began ordering their liquid helium on June 1, 2015.

DLA contracts with vendors who purchase liquid helium from the Federal Helium Reserve in Amarillo, Texas. The agency secures the liquid helium via the federal in-kind program on behalf of any federal grantee. The agency currently purchases liquid helium and other chemicals for research groups at approximately 30 universities.

“The program has ensured that we can get the helium when we need it at a stable cost,” added Clewett. “We also don’t have to worry about being the last customer to have our order fulfilled when helium is in short supply.”

The OPA and ACS pilot-tested the program with researchers at seven colleges and universities that had diverse liquid helium delivery and cost challenges: Stanford University, Boise State University, West Texas A&M University, University of Memphis, University of New Hampshire, Amherst College, and Worcester Polytechnic Institute. In general, academic researchers who are not participating in the program pay between $7 per liter and $30 per liter, depending on their location and usage. However, program enrollees are saving an average of 15 percent. One enrollee is saving as much as 27 percent.

The pilot program is slated for expansion in the fall, and new enrollees will be asked to commit to the program by December 2015. They would begin receiving their helium on June 1, 2016.

Mark Elsesser, APS senior policy analyst, who oversees the program, is elated about its success. “I was apprehensive at the start because we were trying something different; but for all enrollees to see immediate savings and have reliable delivery is a huge win for the community,” said Elsesser. “I’m excited to work with DLA on the program expansion this fall.”

Added Laura Greene, a condensed matter physicist and vice president of APS: “It is remarkable what the OPA has done on behalf on the scientific community.”

Notwithstanding the success of the program, the scientific community remains concerned about the future availability of liquid helium.

William Halperin, a low-temperature physicist at Northwestern University and chair-elect of the APS Division of Condensed Matter Physics, testified about those challenges during a Capitol Hill hearing on July 8, 2015, before the House Energy and Mineral Resources Subcommittee. “For some scientists, purchasing liquid helium has become an existential issue — as the price has gone up, they have been forced to choose between abandoning a research project or laying off employees and students,” he said.

In addition to informing lawmakers about the purchasing program, Halperin told them APS is partnering with the ACS and the Materials Research Society to determine the best path for “transitioning as many academic researchers as possible to systems that recycle helium.”

Although the Helium Stewardship Act of 2013 extends the lifetime of the Federal Helium Reserve to 2021, the long-term supply of liquid helium is still a concern. Therefore, Halperin added that another step should be taken: “This subcommittee should carefully consider possible legislative fixes to shutting down the reserve.”

The author is Press Secretary, APS Office of Public Affairs.