A Physicist Among the Angels 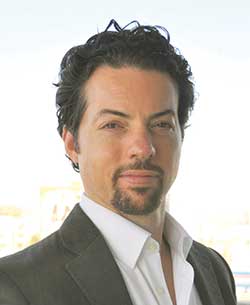 Matthew Davis acknowledges what we are all thinking: that being a physicist can generate major superhero status, no matter the sector. “[Having studied] physics sets me apart [in business],” he says. “It checks the box that says ‘He’s smart. He can handle anything.’” So when it came time for this entrepreneur and philanthropist to plan his career, he easily saw the discipline’s broad value. Davis majored in the subject and received a professional science master’s in science and business from the University of Utah. Following his graduation in 2004 and a stint as a consultant for the U.S. government, he launched RENEW Strategies, a company that manages a global network of investors who seek to make both social impact and financial returns on their investments in Africa. “I wanted to do something unique, and what better way to prepare me is there than study physics.

The investors who comprise his network are known as “angels,” high-net-worth individuals whose funding decisions tend to be driven by their hearts as well as their wallets. Angels often form investing groups that are geographically focused and offer entrepreneurs the opportunity to pitch ideas that the angels can decide to support either independently or in subgroups. Angels play a critical role in the start-up pipeline because they often invest in ventures that are relatively new or too tiny to attract traditional venture capital.

Recognizing how invaluable angels are to entrepreneurial and overall business growth, Davis and his team at RENEW decided to harness this power for good. His company engages angels on a worldwide stage. These “accredited investors” (according to SEC rules), with at least $1 million in liquid assets, support companies in Africa in a “Goldilocks” zone: “We manage an angel network that makes investments that are too small for larger investment funds to be interested in and too big for microfinance,” he notes.

RENEW’s financial analysts, lawyers, and business consultants, with extensive experience in Africa, look for enterprises that have the potential to generate attractive returns and provide a major social kickback to their communities. The firm then funds these targeted businesses (with, on average, $500,000) and also provides other resources to scale up. This can include business support, such as helping the enterprise establish a board of directors, recruit senior management, strengthen its finances, and ramp up its sales and marketing. All the while, RENEW is keeping an eye on the bottom line, especially as it relates to creating jobs, improving economic development outputs, and developing new directions for business expansion.

“RENEW reduces the costs and risks of investing in developing and emerging countries by partnering with the development community, having a dedicated presence on the ground, managing an exceptional local network, using innovative structures and investment instruments, and providing hands-on consulting to our investments,” says Davis.

Sectors range from high technology to manufacture. A recent success story showcases dVentus Technologies, a companybased in Addis Ababa, Ethiopia, that provides clean energy solutions. This is especially timely and relevant because “Ethiopia is trying to make itself a power exporter,” says Davis, and its government is keen to invest in energy-related enterprises. But its national grid needs work, he admits. dVentus used RENEW’s investment to successfully develop a smart meter customized for Ethiopia and for other countries in the region, and “is now negotiating contracts with a number of national and regional governments across sub-Saharan Africa and the Middle East — including Ethiopia — to modernize their power grids and save billions of dollars from poor grid management,” he adds. Interestingly, the meter was designed and customized by Daniel Gizaw, an engineer who worked in the U.S. for many years before returning to his home country, Ethiopia, to develop the energy industry. dVentus is now working with prospective investors to develop a smart-meter-and-generator manufacturing plant in Ethiopia.

RENEW has also provided capital to manufacturers in the food industry. It has made investments in an Ethiopian specialty coffee farm, which ultimately helped to create 500 jobs, as well as Mama Fresh Injera, Ethiopia’s largest commercial manufacturer and exporter of injera, a staple bread of Ethiopian cuisine. The investment is financing the construction of a new export-focused factory that will enable Mama Fresh to triple daily production of injera, and to hire 30 additional employees, primarily women, to staff the new facility. The investment is also allowing the company to explore new market opportunities for injera, including the growing gluten-free markets in the U.S. and Europe. RENEW’s contribution is expected to achieve significant social benefits for employees, smallholder farmers, and the greater Ethiopian economy, and will more than double the purchases Mama Fresh makes from the thousands of smallholder farmers who supply grain to the company, according to RENEW’s website.

And soon, RENEW will be in the tahini business too. Currently, the majority of tahini, which is eaten throughout the Middle East, Africa, and Asia, is processed in Israel from sesame that is grown in Ethiopia. But Davis plans to process it in Ethiopia as well, by scaling up the tahini processing plants in-country: “We are adding value to the sesame supply chain … So instead of exporting the raw sesame, we shorten the supply chain in Ethiopia and export a higher value of sesame in the form of tahini itself.” This way, the country retains more profit. This seemingly simple change in how the business operates has the potential to have a huge impact in supporting higher-wage jobs and spurring growth in related businesses that are connected to this industry.

Davis’ foray into impact investing started with his hunger to go into commerce. “I just loved the idea of getting into business,” he says. “I wanted the top, corner office.” And he realized that his physics degree could be a major springboard to achieving his goals. When he graduated, he headed to Washington, DC for a job at a consulting firm that he had landed due to some clever networking with former schoolmates. “This is where having a science background can get you into trouble,” he notes with a chuckle. His colleagues would constantly pull him onto an assignment, echoing “‘Oh you’re a physics major? You’re hired. Can you go help NOAA with their project?’” he says.

The concept behind RENEW sprung out of a personal trip Davis took to Africa in 2006. He noticed that the common western approach to development is “Here’s a problem and how do we fix it?” But armed with his physics and business playbook, he looked at development differently, and asked “What are the opportunities and how can we maximize them?” He started thinking about venture-building. He consulted with potential investors who agreed to fund projects, as long as Davis did the legwork to ensure that they were legitimate and could provide both a solution to a development problem and a return on the investment.

RENEW’s modus operandi reflects a shift in how charitable ventures typically operate, he explains. “Here, we are finding good opportunities, scaling up the companies and creating lots of jobs in the process,” he says. Angel investing is nothing new in the U.S., but applying this business model to development projects abroad is innovative. “More traditional philanthropic endeavors are utilizing private-sector mechanisms to improve and increase social impact,” he says.

The company focuses most of its resources on Ethiopia, where Davis currently spends 70% of his time. Next year, he expects to expand to another country in Africa. As he looks to grow his own business, he sees opportunities for scientists who are also business-minded. “I would love to see more physicists leading companies and potentially making that interaction between the people on the floor of the factory and in the lab and those who invest,” he says.

Alaina G. Levine can be contacted through www.alainalevine.com, or followed on twitter @AlainaGLevine.