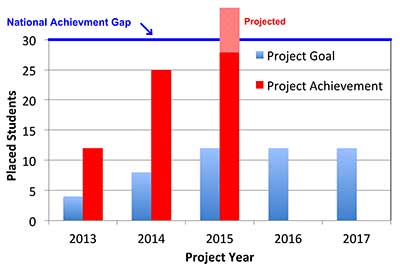 The red bars show the number of URM students beginning graduate physics study per year in the APS Bridge Program. The goal is to increase annual URM physics Ph.D. degree production by 30, indicated by the horizontal purple line at the top of the graph. The blue bars show the enrollments anticipated at the beginning of the project.

In 2012, APS Director of Education and Diversity Theodore Hodapp looked at graduation rates of underrepresented minorities (URMs) who earned degrees in physics. He was struck by the disparity between the graduation rates of URMs earning Ph.D.s and URMs earning bachelor’s degrees. “There was obviously a break in the pipeline somewhere, and we were losing many students who probably had the potential to succeed at the graduate level.”

Hodapp defines the national achievement gap as the difference between the percentage of physics Ph.D.s awarded to URMs (~10%) and the corresponding percentage of bachelor’s degrees (~4%). Seen from this perspective, only about 30 more URM physics Ph.D.s per year would close this gap (see graph).

Three years after its inception, according to staff members, the APS Bridge Program expects to effectively erase that gap — an accomplishment far beyond what the organizers had originally planned — by placing more than 30 students into graduate programs in 2015. What’s more, none of these students would be studying for their Ph.D.s today without the APS intervention, say program staff.

“The Bridge Program continues to surpass our expectations in placing students, and is providing opportunities for students to pursue doctoral degrees in physics,” said Brian Beckford, the Bridge Program manager. “We hope to continue to be an avenue for students who are being overlooked and for departments that are aiming for a more diverse representation in their graduate student population.”

The program recently announced that it would fund two new sites beginning in July 2015. The University of Central Florida (UCF) and and Indiana University (IU) Bloomington were chosen through a competitive review process, similar to the review process at the National Science Foundation, bringing the total number of funded sites up to six. The two new sites will each receive $150,000 over three years to support URM students who will transition to doctoral programs in physics.

IU Bloomington will offer a two-year M.S. degree program that will include a wide array of lab-based courses, exposure to research in traditional as well as interdisciplinary fields of physics, and individual mentoring, advising, and professional development in preparation for doctoral studies. The program aims to have four to five students enrolled in the program every year.

Jon Urheim, Director of the IU Bloomington program, advocated for his university to join the APS effort because of his concern that its graduate physics enrollments were not representative of regional demographics, especially those of the African American– and rapidly-growing-Hispanic segments of the population. He sees the program as a “win-win-win” opportunity to contribute to the APS Bridge Program’s national goals, immediately enhance diversity, and provide a natural avenue for URM students to transition from the Bridge Program into IU Bloomington’s Ph.D. program. Urheim and his team were impressed with the quality of the program’s first round of applicants. “Every one of the applicants we interviewed was engaging, interesting to talk with, and displayed qualities that indicated potential for excellence in Ph.D.-level research,” he said. “It was a disappointment that we were not able to offer admission to all of them.”

The new Physics Transitional Master’s program at UCF will recruit four students per year and prepare them to continue onto a Ph.D. program at UCF or elsewhere. These students will be placed into undergraduate and graduate courses depending on their level of preparation, following a knowledge assessment taken by all graduate students before classes begin. During their first summer in the program, students will participate in research and develop presentation and writing skills by participating in the UCF Summer Research and Writing Institute.

Talat Rahman, Site Leader at UCF, said “A national program can be a real catalyst for change. If the program does well, it affects everyone.” Rahman is most excited that the Bridge Program will encourage diversity in thinking. She’s currently entertaining the idea of engaging Bridge students in some teaching, as all graduate students do at UCF, so that students can go through this experience together and learn from each other through the process. UCF is committed to funding the program for three years beyond APS funding, and hopes that heightened awareness will encourage more URM students to apply directly to UCF, thereby further increasing diversity in the applicant pool.

With the addition of IU Bloomington and UCF, there are now 12 new slots for Bridge students this year. At press time, 25 students were placed into APS Bridge sites and graduate programs. For students that aren’t placed at APS Bridge sites, the Bridge Program circulated their applications to more than 45 additional doctoral- and master’s-granting institutions. These institutions, each committed to improving diversity in physics, make offers based on funding availability and matches in research interest. Bridge Program staff expect that the total numbers of students placed will effectively erase the achievement gap.

The program also recently expanded to include Partnership Institutions — doctoral- and master’s-granting institutions that are committed to fostering a diverse and safe environment for all doctoral students, including Bridge students.

For more on the background of the program, see the APS Bridge Program website. For information on bridge programs in physics, please see this Physics Today article [1].

Until a few months ago, the author was the APS Bridge Program Coordinator.

Note: The Bridge Program is supported in part by the National Science Foundation, under award #1143070, and by the American Physical Society.