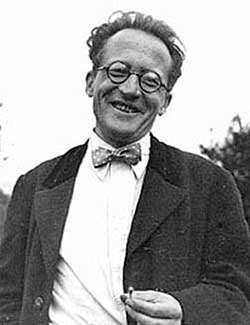 Sir Isaac Newton ushered in a new era in physics when he devised his universal law of gravity and equations of motion. Three hundred years after Newton’s death, Erwin Schroedinger made a similar contribution with an equation that is the quantum equivalent to the classical laws of motion and conservation of energy in classical physics.

Schroedinger was the only child of Rudolf Schroedinger, the owner of a prosperous oilcloth factory, whose financial independence enabled him to pursue scientific interests in chemistry and botany. Other than a part-time tutor, young Erwin received much of his early education from his father, before matriculating at an academic gymnasium in Vienna (the equivalent of a prep school in the U.S.). He loved math and physics but also appreciated German poetry and the theater, although literary criticism and rote memorization of historical facts bored him. He continued his studies at the University of Vienna, where he first attended lectures in theoretical physics by Friedrich Hasenöhrl, who became his thesis advisor.

After earning his doctorate in 1910, Schroedinger worked in a laboratory for Franz Exner in Vienna, supervising the large lab courses and gaining what he considered to be invaluable experimental skills in the process. He served in World War I, keeping up with physics in the remote areas where he was stationed on the Italian front. He moved around a great deal for much of his early career, partly because of the political turmoil. By 1921, he was at the University of Zurich until he replaced Max Planck as a professor at the Friedrich Wilhelm University in Berlin six years later.

Quantum mechanics was still in its infancy, but developing rapidly. In November 1924, Louis de Broglie defended his doctoral dissertation, postulating that not just light, but matter, evinced particle-wave duality. Schroedinger heard of the breakthrough while reading one of Einstein’s papers (Einstein learned of it from Paul Langevin), and was intrigued by the concept of these so-called de Broglie waves.

Schroedinger had never much cared for Bohr’s model of the atom, and a footnote in Einstein’s paper inspired him to model the motion of an electron around a nucleus as a wave rather than an orbiting particle. By late 1925, Schroedinger was stymied in his attempt, and decided to spend some time in seclusion at a mountain cabin in Arosa, Switzerland, accompanied by one of his mistresses. Romantic seclusion did the trick: He cracked the problem in January 1926, and then he published his wave equation for a hydrogen-like atom and also a series of four papers that year applying his equation to various other systems.

Buoyed by his breakthrough, he wrote to Einstein on April 28, 1926: “This whole conception falls entirely within the framework of ‘wave mechanics’; it is simply the mechanics of waves applied to the gas instead of to the atom or the oscillator.” Einstein responded with much enthusiasm. He was not alone: Schroedinger’s wave equation is considered one of the most important physics breakthroughs of the 20th century, complementing rather than contradicting the matrix model developed by Werner Heisenberg around the same time. (Schroedinger’s approach was easier to adopt, in fact, because it was familiar to most physicists.)

That said, he never fully reconciled his work on quantum mechanics with its philosophical implications, which he found deeply unsatisfying. The Schroedinger equation expresses the wave function of a quantum system and how it changes dynamically over time, but it doesn’t define what a wave function actually is. The equation is not strictly deterministic; it predicts a probabilistic distribution of likely outcomes. “I don’t like it and I’m sorry I ever had anything to do with it,” he once famously observed of the traditional Copenhagen interpretation.

Despite this success, Schroedinger struggled to find a stable long-term academic position. By 1931 he was in Berlin, although that position did not last long. The Nazis rose to power in Germany in 1933, and like many scholars of that era, Schroedinger was deeply disturbed by the purging of Jewish intellectuals from the universities. He opted to leave Germany for Oxford University in England. Within a week of his arrival, he learned he had won the 1933 Nobel Prize in physics, along with Paul Dirac, who devised his own equation to incorporate electron spin, a largely new concept at the time.

It should have heralded a long-overdue period of professional stability, but rumors soon spread about Schroedinger’s unconventional domestic situation: an open marriage with wife, Anny, and a son by his mistress, the wife of another colleague who had also come to Oxford at Schroedinger’s insistence. Not even the luster of the Nobel Prize could save him from social censure and eventual dismissal. Princeton University made him an offer, which Schroedinger declined, perhaps because there were similar reservations about his desire to bring both wife and mistress to the U.S. Fortunately, his physics research didn’t seem to suffer from all the professional upheaval: He came up with his famous paradoxical thought experiment, Schroedinger’s cat, during this period.

Visa delays prevented him from accepting a position at the University of Edinburgh, so Schroedinger returned to the University of Graz in Austria, which proved to be ill-advised and badly timed. The Nazis annexed Austria within two years, and he found himself in professional exile once again, despite a desperate attempt to appease the Nazi regime by recanting his former opposition — an act that earned the rancor of many of his colleagues, including Einstein. Schroedinger later apologized for this lapse in principle.

The prime minister of Ireland convinced him to join the fledgling Institute for Advanced Studies in Dublin, modeled on its Princeton predecessor. Princeton had Einstein; Ireland wanted Schroedinger. All told, Schroedinger spent a fruitful 17 years in Dublin, calling that period “a very, very beautiful time. Otherwise I would have never gotten to know and learned to love this beautiful island of Ireland.” In 1956, he finally returned to Austria to take up his own chair at the University of Vienna. “Austria had treated me generously in every respect,” he later recalled, “and thus my academic career ended happily at the same Physics Institute where it had begun.” He died on January 4, 1961, of the tuberculosis that had plagued him for much of his life.