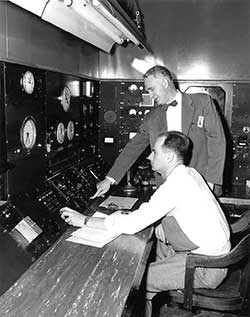 Walter Zinn shutting down the Chicago Pile 3 for the last time.

Should one happen to drive through the high desert of eastern Idaho, one might stumble across what is now called the Idaho National Laboratory, a federal nuclear research facility that has played a key role in the development of nuclear power. It houses the decommissioned Experimental Breeder Reactor-I (EBR-I), the first nuclear reactor to generate usable electricity via fission. The man responsible for its design and operation was a Canadian physicist named Walter Henry Zinn.

Born in Berlin (now Kitchener), Ontario, in 1906, Zinn was the son of a tire factory worker. While his older brother, Albert, followed in their father’s footsteps, young Walter showed a keen interest and aptitude for math and science. After earning a degree in mathematics from Queens University, he worked for an insurance company, and then went on to complete his PhD in physics at Columbia University with a thesis on the structure and width of x-ray absorption limits in crystals. He supported his studies by teaching at both schools, and he joined the faculty of the City College of New York in 1932.

By 1939, Zinn found himself working with Enrico Fermi, among others, at Columbia’s Pupin Physics Laboratories, researching uranium isotope properties and the element’s potential usefulness for the recently discovered process of nuclear fission, specifically whether it should be possible to achieve a sustainable chain reaction. With the outbreak of World War II and the launching of the top-secret Manhattan Project to develop an atomic bomb, Zinn followed Fermi to the University of Chicago to continue their work.

Zinn was on hand for the first nuclear chain reaction on December 2, 1942, achieved in an abandoned squash court at the university. His job was to remove the control rod from the pile to start the chain reaction, and also to reinsert that control rod after 28 minutes. He stood at the ready with a fallback emergency safety rod, should the pile become too “hot” and the control rod designed to automatically shut down a runaway chain reaction failed. Chicago Pile-1 ran for just three months, since it lacked a radiation shield and was deemed too close to the densely populated city should there be a nuclear accident. Instead, it was taken apart and re-assembled — this time with a radiation shield — at a nearby spot called “Site A,” which would later move to a new “Site D” five miles away and become Argonne National Laboratory.

Zinn remained on the Manhattan Project until 1946, when the Atomic Energy Commission appointed him director of Argonne, now repurposed to focus primarily on problems relating to future reactor development. Under his leadership, Argonne went on to develop several innovative reactor designs, blossoming from a small wartime research group into an internationally recognized center for nuclear reactor R&D and related science. Alvin Weinberg, director of Oak Ridge National Laboratory during the same period, once described Zinn as “a model of what a director of the then-emerging national laboratories should be: sensitive to the aspirations of both contractor and fund provider, but confident enough to prevail when this was necessary.”

In addition to his responsibilities as director, Zinn was keen on developing a fast breeder reactor design, dubbed Critical Pile-4, or “ZIP,” for “Zinn’s Infernal Pile” (breeder reactors can create more nuclear fuel than they consume).

When ZIP was ready, Zinn moved the assembly to what was then the National Reactor Testing Station in Idaho, a new outpost of Argonne, where it was dubbed EBR-I.  On December 20, 1951, Zinn and his crew gathered around an array of four 200-watt light bulbs in the lab and watched them light up as electricity flowed to them — electricity produced by the EBR-I reactor. Within a few days, the reactor was able to supply power for the entire laboratory building, demonstrating that nuclear energy might be an economically viable alternative energy source: One ton of natural uranium can produce as much electricity as burning 80,000 barrels of oil, or 16,000 tons of coal. Two years later, experiments showed that EBR-I was indeed breeding new fuel. A nearby reactor plant, BORAX-III (based on a boiling water reactor design) later proved capable of powering the city of Arco, Idaho.

In the first decade of experimental nuclear power reactors, there were serious nuclear accidents, including one with fatalities. For example, Zinn supervised the BORAX-I test of boiling water reactors in 1954. He partially withdrew control rods to deliberately produce a power excursion, but the result was an explosion and a meltdown of more than half the core. In 1955, EBR-I suffered a partial meltdown during a test of how the reactor was responding to fluctuations in coolant flow; the culprit turned out to be thermal expansion of the fuel rods.

Seven years later, during the testing of another reactor, a scientist pulled out a control rod too far, melting down the core of an experimental prototype. That mistake produced an explosion of steam strong enough to cause the reactor to jump nine feet into the air, with a shock wave that killed three military personnel in the vicinity. The men were buried in lead coffins due to the massive exposure to radiation they suffered.

Zinn left Argonne in 1956 to found a consulting firm in Florida, General Nuclear Engineering, to design and build pressurized water reactors. When the company was acquired by Combustion Engineering eight years later, he headed the nuclear division until 1970, remaining on the board until his retirement in 1986. His boiling water reactor designs were early prototypes of nuclear plants still operating in the US and Japan. He also served on numerous government advisory boards during this period, and was the first president of the American Nuclear Society in 1955. He suffered a stroke and died in Clearwater, FL, on February 14, 2000, at the age of 93.

The EBR-I was decommissioned in 1964 and earned historical landmark status in 1966. It remains open to the public during the summer for those inclined to visit the Idaho National Laboratory.